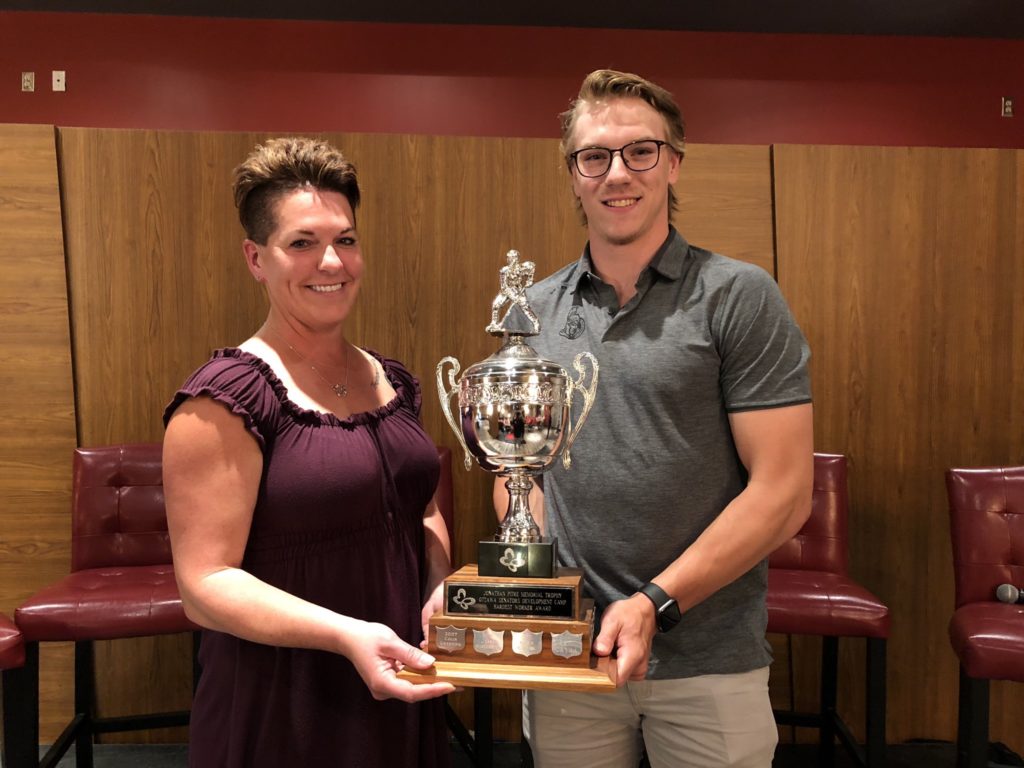 Prince Albert, SK – Parker Kelly continues to be a hard worker at the next level.

On Friday, Kelly was the recipient of the Jonathan Pitre Memorial Award for the hardest working player at the Ottawa Senators development camp.

This is the second consecutive development camp that the Camrose, AB product has won this award. Last year, Kelly shared the inaugural Jonathan Pitre Memorial Award with Brady Tkatchuk.

“To share that moment with Tina for the second year is something I’ll remember for the rest of my life.“

Sens prospect Parker Kelly became only the second player to have his name inscribed twice on the Jonathan Pitre Memorial Trophy awarded to the hardest worker at Dev Camp. pic.twitter.com/yF4Yuxu8Lz

The award is named after Jonathan Ptire, also known as the “Butterfly Boy.” Pitre passed away last April from recessive dystrophic epidermolysis bullosa, a rare genetic mutation that causes the skin to blister and fall off at the slightest touch. He bonded with many Senators players and was named an honorary scout in 2014. Pitre also raised more than $200,000 for research of the disease.

For the 2017-18 season, Kelly was the recipient of the Raiders’ hardest working player award.

Kelly wrapped up his fourth season with the Raiders, scoring 35 goals and adding 32 assists in 64 games in Prince Albert. In the WHL Playoffs, he had eight goals and nine assists in 23 games. Included in that total was a 10-point performance in the Raiders’ 2019 Rogers WHL Championship Series victory over the Vancouver Giants.

After going undrafted at the 2017 NHL Draft, Kelly was invited to the Ottawa Senators development camp and earned a spot at their training camp. Kelly signed his entry-level contract with the Senators at the end of his first camp on September 19, 2017.

For the second year in a row Parker Kelly is named the hardest working player and recipient of the Jonathan Pitre Memorial Award for #SensDevCamp. pic.twitter.com/EFLxzJaIow