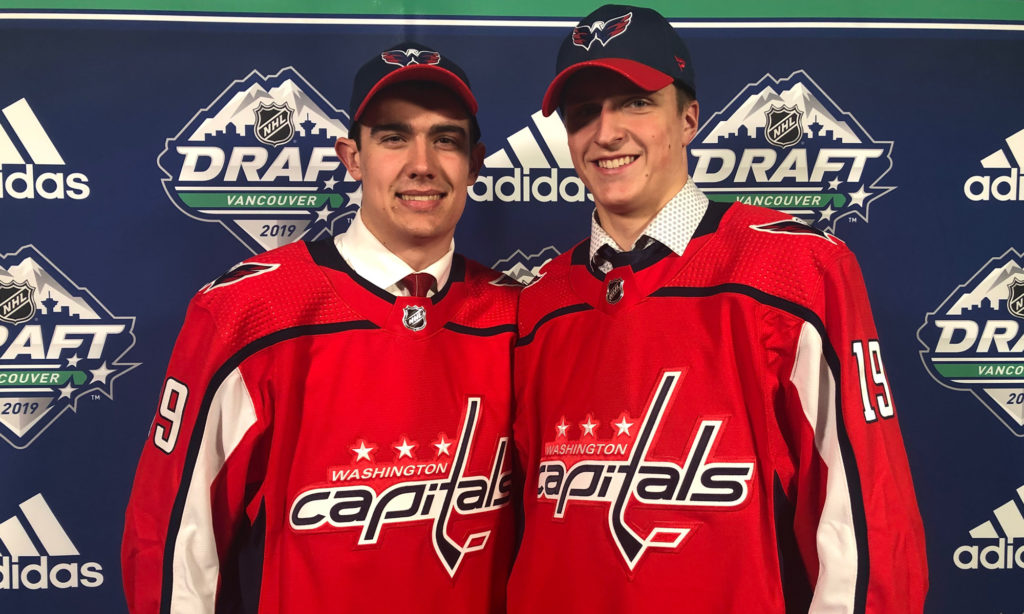 Prince Albert, SK – Brett Leason and Aliaksei Protas will continue to be teammates at the next level.

The linemates were drafted a round apart by the Washington Capitals during the second day of the 2019 NHL Draft on Saturday.

This is the first time the Raiders had two players selected since the 2015 draft. It is also the first time one team took a pair of Raiders since the Florida Panthers took three in the 2001 NHL Draft.

Leason was first off the board when he was drafted in the second round at 56th overall.

Listed at 6’4 and 199 lbs, the Calgary product made tremendous strides in his game this season to rocket up the draft charts after being passed over twice. After not being ranked early in the season, Leason’s earned him a ranking of 25th among North American skaters in NHL Central Scouting’s final rankings released in April.

In 55 regular season games, Leason led the team with 36 goals and 53 assists for 89 points. He continued his scoring touch in the WHL Playoffs with 10 goals and 15 assists in 22 games.

Leason’s play earned him a spot on Team WHL for the 2018 Canada Russia Series in November. In December, he was named to Team Canada for the 2019 IIHF World Junior Hockey Championship. Leason had three goals and two assists in five games at the tournament.

During the season, Leason was named the WHL McSweeney’s Player of the Month twice and was a three-time recipient of the WHL On the Run Player of the Week. He was also recognized as a First-Team All-Star for the Eastern Conference.

Leason was drafted in the third round of the 2014 WHL Bantam Draft by the Tri-City Americans. He was acquired by the Raiders during the 2017-18 season. In 190 career games in the WHL, he scored 60 goals and added 80 assists.

Early on Saturday morning, Leason was also named the recipient of the E.J. McGuire Award of Excellence. The award is given to the player who best exemplifies the commitment to excellence through strength of character, competitiveness and athleticism.

2019 Second Round Draft Pick (56th Overall) @Bleason7 talks with the media from Vancouver for the first time as a member of the Washington Capitals. #ALLCAPS | #CapsDraft pic.twitter.com/cINdGOUVxt

One round later, the Capitals selected Aliaksei Protas in the third round, 91st overall.

Protas developed over the course of the year as he rose to 44th among North American Skaters in NHL Central Scouting’s final rankings. Prior to the year, he was not listed.

During his rookie campaign in the WHL, the Belarusian import posted 11 goals and 29 assists in 61 games played. He picked up his scoring in the WHL Playoffs with 12 goals and 10 assists in 23 games, including back-to-back hat tricks in Games 5 and 6 of the Eastern Conference Championship.

The 6’5, 192-lb winger was named the WHL Rookie of the Month for April and earned CHL Player of the Week honours for the week ending on April 30.

Internationally, Protas suited up for Belarus at the 2019 World Junior Hockey Championship Division 1 in December. In five games at the tournament, Protas scored twice and added three assists.

Protas was selected by the Raiders 26th overall in the 2018 CHL Import Draft.

Aliaksei Protas meets the media for the first time as a member of the Capitals after Washington moves up to select him in the third round of the 2019 NHL Draft.#ALLCAPS | #CapsDraft pic.twitter.com/PxsMTVlBdm

Leason and Protas are the fourth and fifth Raiders to be drafted by the Capitals.