Scott Shuts The Door In Game 4 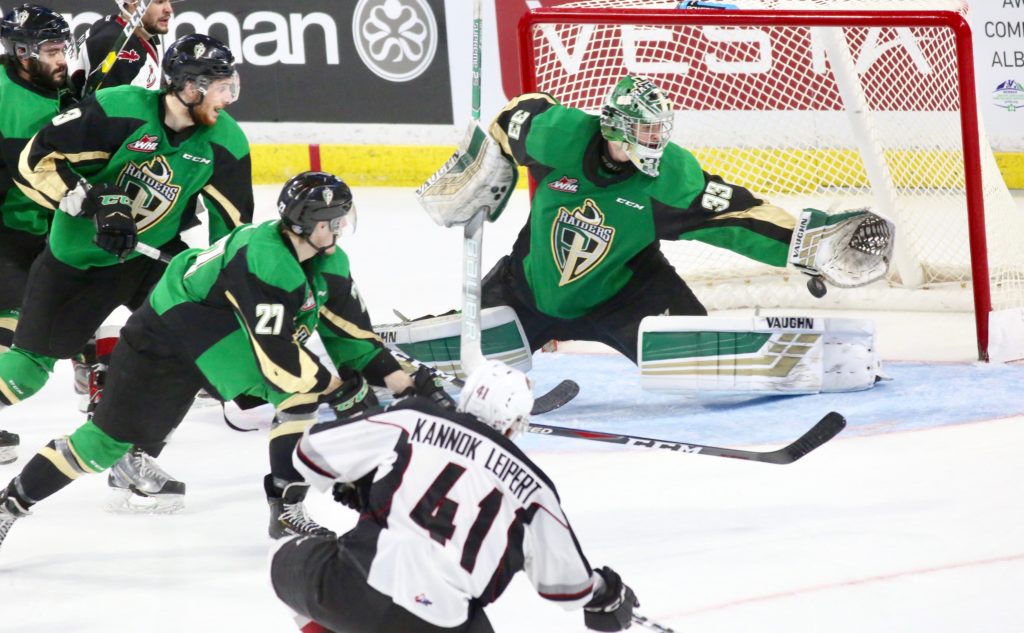 Langley, BC – Ian Scott stopped all 36 shots fired his way as he backstopped the Prince Albert Raiders to a 1-0 win over the Vancouver Giants in Game 4 of the 2019 Rogers WHL Championship Series on Wednesday night at the Langley Events Centre.

Scott’s fifth shutout of the WHL Playoffs put the Raiders up three games to one in the best-of-seven series.

Brett Leason scored the game’s lone goal in early in the third period to extend his goal-scoring streak to four games and his point streak to seven.

The Giants came out firing in the opening 20 minutes of the game, but Scott was able to turn them away. The Toronto Maple Leafs draft pick stopped all 15 shots fired his way during the period. His best of the frame came when he stopped Davis Koch on a shorthanded breakaway in the final moments of the period.

In the second, the Raiders started to push back as they controlled the offensive zone for the majority of the second half of the period.

Vancouver had its chances as Milos Roman sent a breakaway shot wide and Brayden Watts toe-dragged to the centre of the zone, but lost control of the puck.

The Raiders’ best chance of the period came late in the middle frame. Sergei Sapego tripped a Giant of the puck in the defensive zone and skated in on David Tendeck on a breakaway. However, Tendeck made the save as Sapego tried to go five-hole.

In the third, the Giants nearly got on the board. With Scott down, Jadon Joseph threw a backhanded towards the net. However, the Raiders netminder was able to just get his pad on the puck to keep it from crossing the line.

Great desperation save by Ian Scott on Jadon Joseph to rob him of a sure goal. pic.twitter.com/U7EkQozni0

Shortly after, Leason broke the deadlock. Aliaksei Protas chipped a puck ahead to Leason, springing the Calgary product on a breakaway. Leason snapped a shot of which Tendeck got a piece, but wasn’t able to keep the puck from crossing the goal line 4:21 into the final frame.

That goal was well worth the wait! @Bleason7 makes no mistake on the breakaway for @PARaidersHockey!#WHLChampionship pic.twitter.com/tDcvU9ESvV

Scott preserved the lead with his best save of the night. Bowen Byram dug the puck out of the corner and sent a pass across the ice to Alex Kannok Leipert for the one-timer. Scott was able to slide across and snag the puck in his trapper with 7:36 remaining.

From there, the Giants continued to press, but the Raiders kept them at bay. Vancouver pulled Tendeck for the extra attacker for the final 1:17 of the contest, but weren’t able to solve Scott and the Raiders.

Tendeck stopped 25 of the 26 shots he faced while picking up the loss.

The Raiders have a chance win the Ed Chynoweth Cup in Game 5 of the 2019 Rogers WHL Championship Series on Friday night at the Langley Events Centre. Puck drop is 8:30 p.m. CST. The Raiders will be hosting a watch party in the Ches Leach Lounge. Admission is $5 at the door with a limit of 400 people allowed. Doors open at 7:30 p.m. CST.