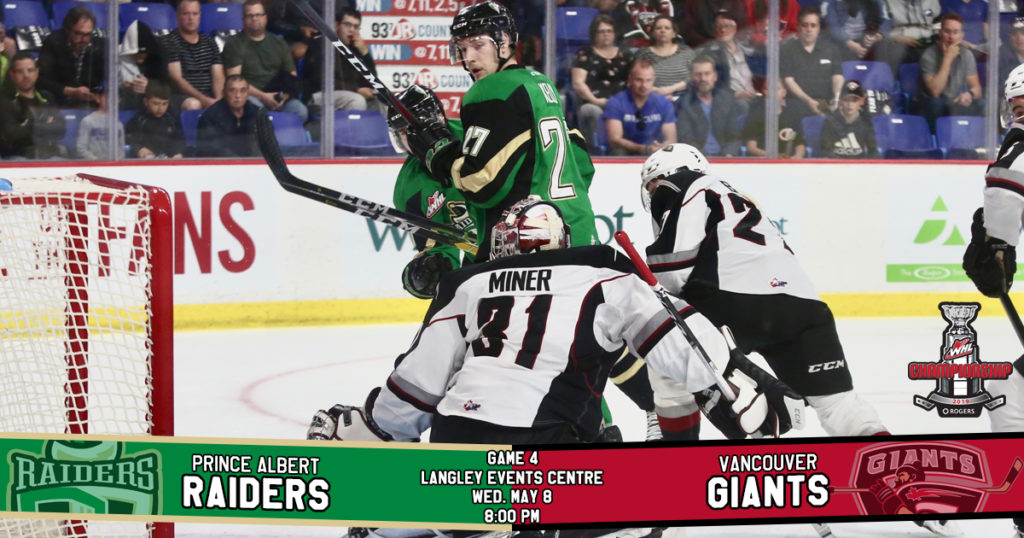 RAIDER REVIEW: The Raiders and Giants continue the 2019 Rogers WHL Championship Series tonight at the Langley Events Centre for Game 4. Last night, the Raiders took a two-games-to-one lead in the best-of-seven series with an 8-2 victory in Game 3. Brett Leason led the way with two goals and two assists for the Raiders. Parker Kelly also had a pair of goals for Prince Albert. Dante Hannoun and Noah Gregor each had a goal and an assist in the win. Aliaksei Protas chipped in with two assists. Cole Fonstad and Ozzy Wiesblatt also scored for the Raiders. Brayden Watts and Yannick Valenti had the Giants’ goals. Ian Scott made 27 saves in the win for the Raiders. David Tendeck stopped 10 shots, while Trent Miner turned aside nine in relief.

MAKE IT EIGHT: The Raiders scored eight goals in a game for the fourth time this season and first time in the WHL Playoffs. Tuesday night was the most goals the Raiders have scored in a playoff game since Game 3 against the Moose Jaw Warriors in Round 1 of the 2016 WHL Playoffs. The last time they scored eight in a playoff game was on April 11, 1999 against Moose Jaw.

LEASON’S FOURTH: With two goals and two assists on Tuesday night, Brett Leason picked up his third four-point night of the WHL Playoffs. The 2019 NHL Draft eligible winger has six goals and three assists during his current six-game point streak. Leason is tied with Dante Hannoun for the team scoring lead with 22 points.

ENDING THE DROUGHT: With his goal in Tuesday night’s win over the Giants, Cole Fonstad ended a 12-game span without a point. His last goal and point came in Game 4 of the Raiders’ Round 1 series against the Red Deer Rebels. The Montreal Canadiens prospect previously had a drought of 13 games without a goal during the regular season. In the 2019 WHL Playoffs, Fonstad has two goals and three assists in 17 games.

NEXT UP: The Raiders and Giants play Game 5 of the 2019 Rogers WHL Championship Series on Friday night at the Langley Events Centre. Puck drop is 8:30 p.m. CST. Catch the game at the watch party in the Ches Leach Lounge. Admission at the door is $5. Doors open at 7:30 p.m.