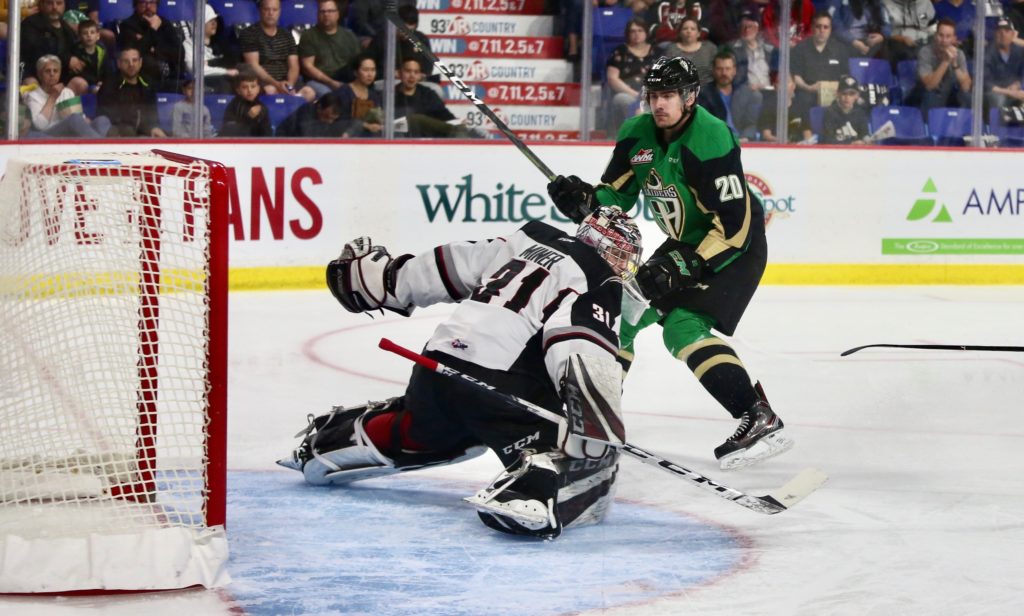 Langley, BC – Brett Leason had a four-point night as the Prince Albert Raiders rolled to an 8-2 win over the Vancouver Giants in Game 3 of the 2019 Rogers WHL Championship Series on Tuesday night at the Langley Events Centre.

Leason finished the game with two goals and two assists to help the Raiders take a two games to one lead in the best-of-seven series.

Parker Kelly also had a pair of goals in the win. Noah Gregor and Dante Hannoun each had a goal and an assist. Aliaksei Protas and Sean Montgomery both recorded two assists.

The Raiders opened the scoring just 41 seconds into the contest. Kelly skated int the zone on the left wing and snapped a shot on goal that got through David Tendeck to make it 1-0.

That’s how you start on the road! @Senators prospect @Parks_17 scores 41 seconds in for @PARaidersHockey! #WHLChampionship pic.twitter.com/JdwYbY8CAv

Two minutes later, Ozzy Wiesblatt extended the lead with a power-play goal. Protas found a cutting Wiesblatt and the rookie from Calgary buried a one-timer to give the Raiders a 2-0 advantage 2:27 into the game.

After the goal, the Giants pulled Tendeck for Trent Miner. Leason welcomed the new goaltender to the game when he skated past the Giants defender ant the blueline and put a backhand shot past Miner to put the Raiders up 3-0.

Shortly after, the Giants ran into penalty trouble as they took three consecutive minors. Cole Fonstad made them pay on a delayed penalty. The Montreal Canadiens prospect tapped in a backdoor feed from Gregor to give the Raiders a four-goal advantage.

The Raiders added another power-play goal less than two minutes later. Leason took a pass from Hannoun at the side of the goal and buried his second of the night to give the Raiders a 5-0 lead.

After a blocked shot, Kelly scored his second of the game. The Ottawa Senators prospect was in on a breakaway from the red line and beat Miner with a shot to his blocker side, putting the Raiders up 6-0 with 3:30 to play in the period.

With 16 seconds left in the opening period, the Raiders made it a 7-0 game at the intermission. Gregor got the puck deep in the Giants end on a breakaway, cut across the goal mouth and backhanded a shot over Miner’s glove.

Tendeck returned to the net start the second period for the Giants as the home side started to press more in the middle frame. Ian Scott was strong in the second period as the Raiders ran into penalty trouble of their own with three consecutive minors.

The Raiders were able to increase their lead late in the second period. On a power play, Leason put a shot on goal from the top of the slot that was deflected by Hannoun in front of Tendeck to give the Raiders an 8-0 lead.

Before the end of the second, the Giants broke Scott’s shutout bid. Lukas Svejkovsky found Brayden Watts in front of the goal on the power play and Watts one-timed the pass past Scott with 52 seconds left in the period, making it an 8-1 game after 40 minutes.

In the third, the Giants wrapped up the game’s scoring with 5:16 to play. Yannik Valenti scored on a one-timer to make it an 8-2 game.

Scott finished the game with 27 saves for the win. Tendeck made 10 saves for the Giants, while Miner stopped nine shots in his relief appearance in the first period.

The two teams will meet again for Game 4 of the 2019 Rogers WHL Championship Series on Wednesday night at the Langley Events Centre. Puck drop is 8 p.m. CST. The Raiders will be hosting a watch party in the Ches Leach Lounge. Admission is $5 at the door with a limit of 400 people allowed. Doors open at 7 p.m. CST.