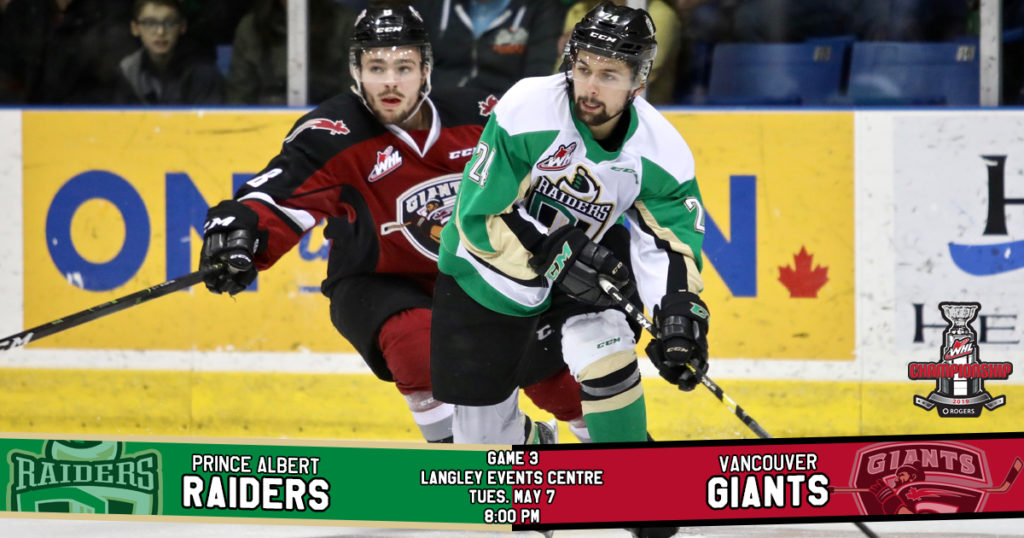 RAIDER REVIEW: The 2019 Rogers WHL Championship Series shifts to the Langley Events Centre as the Raiders are on the road for Game 3 against the Vancouver Giants. In Game 2 on Saturday, the Raiders evened the series with a 4-0 shutout win over the Giants. Ian Scott earned the clean sheet with 15 saves on the night. Dante Hannoun led the way with a goal and two assists in the win. Parker Kelly had a two-assist game for the second straight night. Sergei Sapego, Noah Gregor, and Brett Leason also scored for the Raiders. David Tendeck stopped 30 shots in the loss for the Giants.

TAKING CHARGE: Dante Hannoun registered his fourth three-point night of the WHL Playoffs with a goal and two assists in Saturday night’s win over the Giants. The Delta, BC product is tied for the team lead in goals with 11 and leads the Raiders in scoring with 20 points.

SAPEGO SCORES: Defenceman Sergei Sapego scored his first goal since Game 2 of the Raiders’ Round 1 series against the Red Deer Rebels on Saturday night. The Belarusian blueliner leads the Raiders in scoring from a defenceman with 11 points (three goals, eight assists), which also has him tied for fifth on the team in scoring in the WHL Playoffs.

TOP SPOT: With his shutout on Saturday, Ian Scott now leads the entire CHL Playoffs with four shutouts. The closest goaltender is Samuel Harvey with three for the QMJHL’s Rouyn-Noranda Huskies. No other goaltender in the WHL has recorded multiple shutouts.

SHUT DOWN: The Raiders allowed just 15 shots on goal in Saturday night’s win over the Giants, which is the fewest the Raiders have allowed during the WHL Playoffs. The previous low giving up 16 shots in Game 4 of their Round 1 series against the Red Deer Rebels. It was also the fewest shots allowed by a team since the Lethbridge Hurricanes held the Spokane Chiefs to just 14 shots in 2008.

WEEKLY AWARDS: Dante Hannoun and Ian Scott received recognition for their work in Games 1 and 2 of the 2019 Rogers WHL Championship Series as the winners of the WHL On the Run Player of the Week and the WHL Eli Wilson Goaltending Goaltender of the Week, respectively.

NEXT UP: Game 4 of the 2019 Rogers WHL Championship Series is on Wednesday night at the Langley Events Centre. Puck drop is 8 p.m. CST. Catch the game at the watch party in the Ches Leach Lounge. Admission at the door is $5. Doors open at 7 p.m.