Hannoun Named WHL On the Run Player of the Week 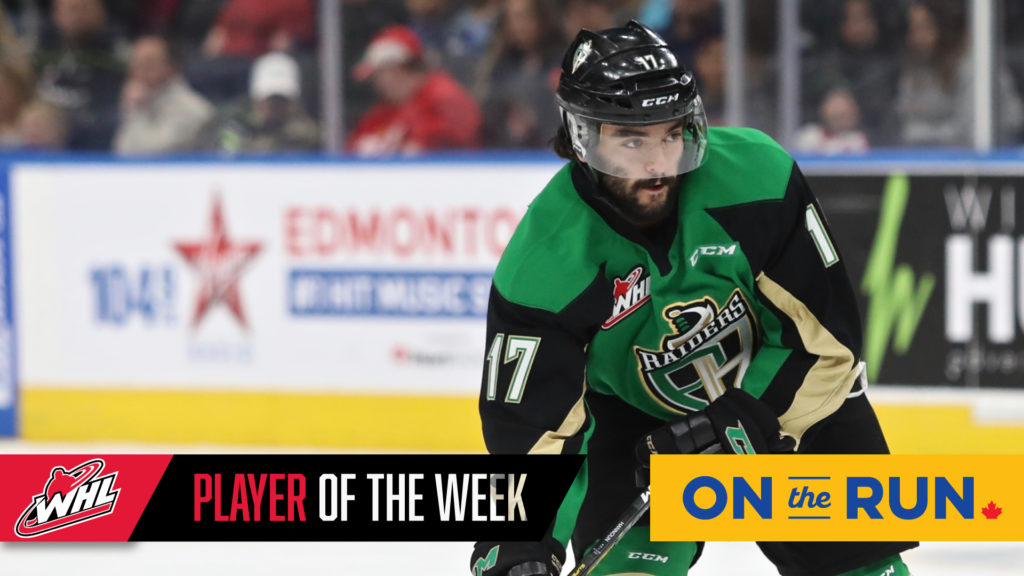 Calgary, Alta. – The Western Hockey League announced today that Prince Albert Raiders forward Dante Hannoun has been named the WHL On the Run Player of the Week for the week ending May 5, 2019.

Hannoun recorded five points (2G-3A) and carried a plus-two rating as the Raiders split Games 1 and 2 of the 2019 Rogers WHL Championship Series against the Vancouver Giants.

Friday, Hannoun contributed two points (1G-1A) to the Raiders tally, despite losing 5-4 to the Giants. Hannoun began his night with a power-play assist on Prince Albert’s first goal and continued his efforts by scoring the Raiders’ third goal of the night to tie the game. To end his night, Hannoun was awarded the second star of the game.

In Game 2 of the 2019 Rogers WHL Championship Series on Saturday, Hannoun increased his point total to three (1G-2A). Scoring Prince Albert’s first goal and assisting on the second and third, Hannoun helped power the Raiders to a 4-0 win over the Giants. After his performance, Hannoun was awarded the first star of the game as well as the WHL Championship Player of the Game.

The 5-foot-6, 160-pound centreman has been a major contributor to the Raiders’ success in the 2019 WHL Playoffs, recording 20 points (11G-9A) in 18 games including, one power-play goal, two short-handed goals and three game-winning goals.

Hannoun and the Raiders will challenge the Vancouver Giants on Tuesday night in Game 3 of the 2019 Rogers WHL Championship Series at the Langley Events Centre. Puck drop is 8 p.m. CST.