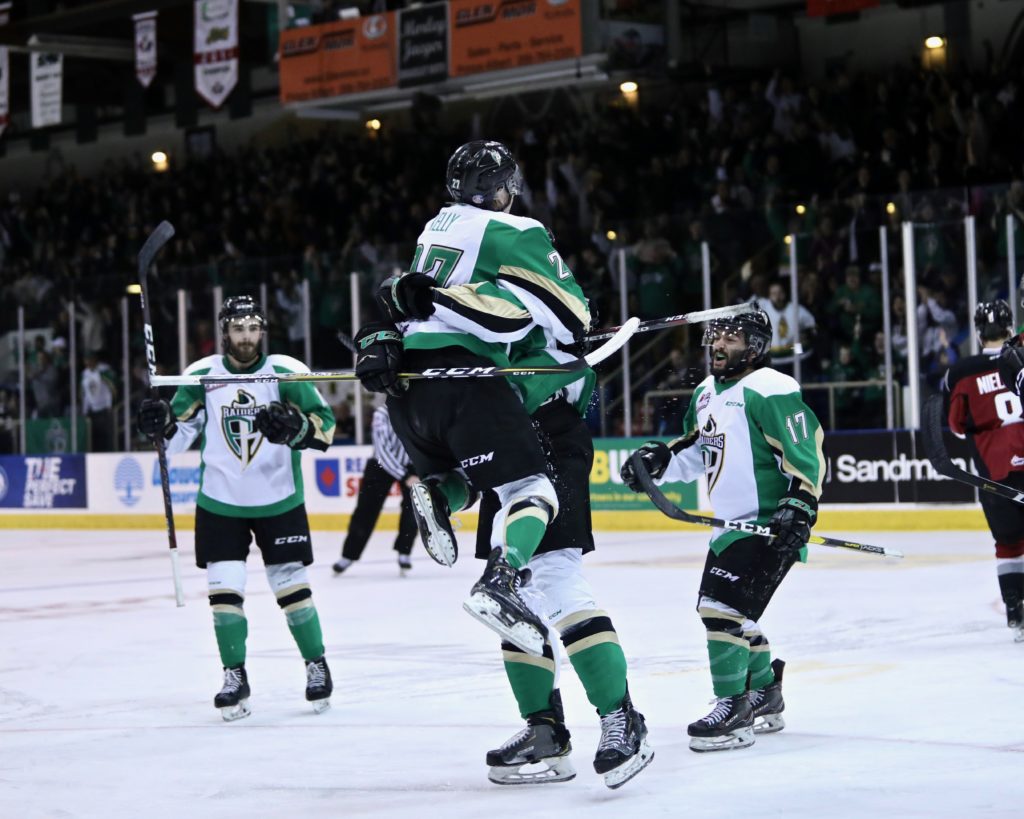 Prince Albert, SK – Dante Hannoun had a three-point night and Ian Scott shut the door as the Prince Albert Raiders blanked the Vancouver Giants 4-0 in Game 2 of the 2019 Rogers WHL Championship Series on Saturday night at the Art Hauser Centre.

The best-of-seven series is now tied at one game each.

Hannoun had a goal and two assists to take over the team lead in scoring in the WHL Playoffs with 20 points. Parker Kelly also recorded his second-straight game with two assists. Scott made 15 saves for his fourth shutout of the WHL Playoffs.

Early on, the Art Hauser Centre faithful thought Aliaksei Protas opened the scoring, but his shot found iron and bounced away from goal.

Midway through the period, the Raiders opened the scoring. Kelly collected the puck in the corner and drove to the front of the net. As he was getting hooked, he found a cutting Hannoun with a pass and the overager from Delta, BC buried his 11th of the WHL Playoffs.

Late in the first, the Giants almost drew even on a power play. Justin Sourdif was left alone in front of Scott, but the Toronto Maple Leafs prospect got his blocker on the shot to keep it a 1-0 game after 20 minutes.

The Raiders increased their lead 7:43 into the second period. Hannoun stole the puck from a Giants defenceman and found Kelly at the side of the goal. The Ottawa Senators prospect waited and found a trailing Sergei Sapego. The Belarusian blueliner toe-dragged to the centre of the zone and snapped a shot past David Tendeck for his third goal of the WHL Playoffs.

Three minutes later, Noah Gregor made it a three-goal game on the power play. Hannoun recovered the puck in the slot and spotted Gregor at the right faceoff circle. The San Jose Sharks prospect one-timed a low shot through Tendeck for his ninth of the playoffs to make it a 3-0 game.

The Raiders kept pressing, but were unable to solve Tendeck for the rest of the night. They also kept the Giants attack at bay, only allowing nine shots in the final two periods to Vancouver.

Brett Leason iced the game in the third period with an empty-net goal with 1:21 to go with his seventh of the playoffs.

Tendeck finished the game with 30 saves for the Giants in the loss.

The series shifts to the Langley Events Centre for the next three games as the Raiders head west. Game 3 of the series is on Tuesday night. Puck drop is 8 p.m. CST.