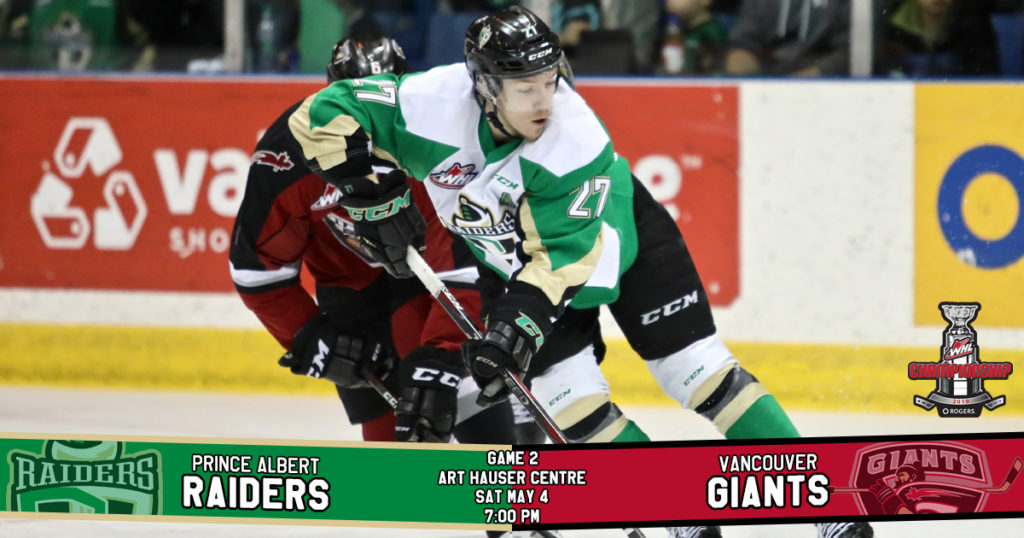 RAIDER REVIEW: The Raiders try to even up the 2019 Rogers WHL Championship Series in Game 2 at the Art Hauser Centre tonight against the Vancouver Giants. In Game 1 last night, the Raiders were unable to complete a comeback in a 5-4 loss to the Giants. Dante Hannoun had a goal and an assist in the loss for the Raiders. Parker Kelly had a pair of assists. Brett Leason, Noah Gregor, and Jeremy Masella also found the back of the net for the Raiders. Dawson Holt had a pair of goals for the Giants, while Jared Dmytriw added a goal and two assists. Bowen Byram also had four assists. Ian Scott stopped 21 shots in the loss. David Tendeck made 25 saves in the win.

ON THE BOARD:  It took 25 games, but Jeremy Masella scored his first career goal in the WHL Playoffs on Friday night. It was the Phoenix, AZ product’s third point of the WHL Playoffs, previously chipping in two assists. Masella’s goal was also the first by a Raiders’ defenceman since Zack Hayes’ goal during Game 2 of their Round 2 series against the Saskatoon Blades – a span of 10 games.

BACK IN THE GOAL COLUMN: Dante Hannoun ended a six-game goalless drought on Friday night with his second-period tally. It was hist first goal since recording a hat trick in a series-clinching win over the Saskatoon Blades on April 14. With a goal and an assist in the contest, the Delta, BC product is now tied for the team lead with five multi-point efforts during the 2019 WHL Playoffs.

PARKER’S POINTS: After being held off the scoresheet in the Eastern Conference Championship, Parker Kelly provided a pair of assists in Friday night’s game against the Giants. It was his first multi-assist performance since Jan. 26 in Cranbrook, BC against the ICE. The Ottawa Senators prospect has four goals and five assists in the 2019 WHL Playoffs.

HEATING UP: With a goal on Friday night, Brett Leason extended his point streak to four games, which is his longest of the WHL Playoffs. It’s Leason’s longest since he had a five-game streak from Jan. 11 to 19.

HOME SWEET HOME: Friday night’s loss to the Vancouver Giants was the first time the Raiders lost in regulation at home at the Art Hauser Centre since Feb. 1 against the Edmonton Oil Kings, a stretch of 18 home games.

NEXT UP: Game 2 of the 2019 Rogers WHL Championship Series is on Saturday night at the Art Hauser Centre. Puck drop is 7 p.m. The series will shift to the Langley Events Centre, beginning with Game 3 on Tuesday night.