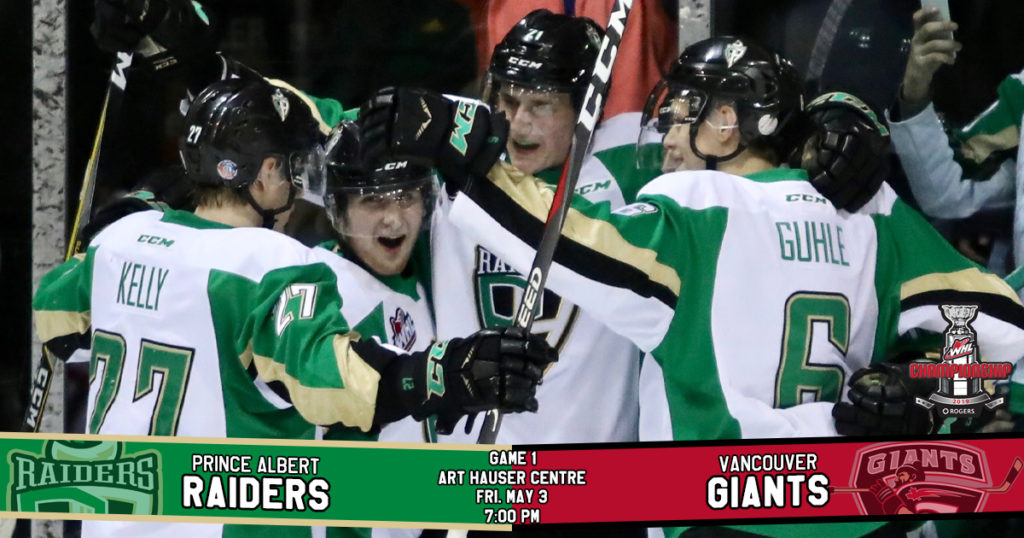 RAIDER REVIEW: The 2019 Rogers WHL Championship Series gets underway tonight as the Raiders host the Vancouver Giants in Game 1 at the Art Hauser Centre. The Raiders secured their spot in the series for the Ed Chynoweth Cup by defeating the Edmonton Oil Kings in six games in the Eastern Conference Championship. The series concluded with the Raiders beating the Oil Kings 4-2 at Rogers Place on Sunday afternoon. Out west, the Giants won the Western Conference Championship in five games against the Spokane Chiefs. The series was wrapped up with a 3-2 win for the Giants in Game 5 last Friday night. To get to this point, the Raiders have won 12 of their 16 games while the Giants earned their 12 wins in 15 contests.

VS. VANCOUVER: The Raiders lost their only matchup with the Vancouver Giants by a 3-1 score at the Langley Events Centre in January. Brayden Pachal scored the Raiders’ lone goal. Davis Koch had a pair of goals for the Giants. Ian Scott stopped 25 shots in the loss. Trent Miner made 31 saves in the win.

GIANT KILLER: While the Raiders only see the Giants once a year, overager Dante Hannoun is very familiar with Vancouver. In his WHL career that saw the Delta, BC product play in 318 regular season and WHL Playoffs games with the Victoria Royals, Hannoun has squared off with the Giants 50 times. In those games against Vancouver, the overage centreman has 17 goals and 34 assists. Included in that total is a three-goal, nine-assist performance in the Royals’ seven-game series against the Giants during last year’s WHL Playoffs.

VIPER STRIKES: Aliaksei Protas has been putting up great offensive numbers for the Raiders during their current run in the WHL Playoffs. Protas, who was ranked 44th among North American skaters in NHL Central Scouting’s final NHL Draft rankings, recorded back-to-back hat tricks to help close out the Edmonton Oil Kings to bring his goal total to 11 in 16 WHL Playoffs games. That matches his goal total from the entire 2018-19 regular season.

STREAKS: After being held off the scoresheet in the first three games of the Eastern Conference Championship, Brett Leason has two goals and two assists during his current three-game point streak. Leason is tied with Sergei Sapego for the longest active point streak on the team. The Belarusian blueliner has four assists over the last three contests, with three of those helpers coming on goals scored by fellow countryman Aliaksei Protas.

NEXT UP: Game 2 of the 2019 Rogers WHL Championship Series is on Saturday night at the Art Hauser Centre. Puck drop is 7 p.m. The series will shift to the Langley Events Centre for Games 3, 4, and 5 beginning on Tuesday night.