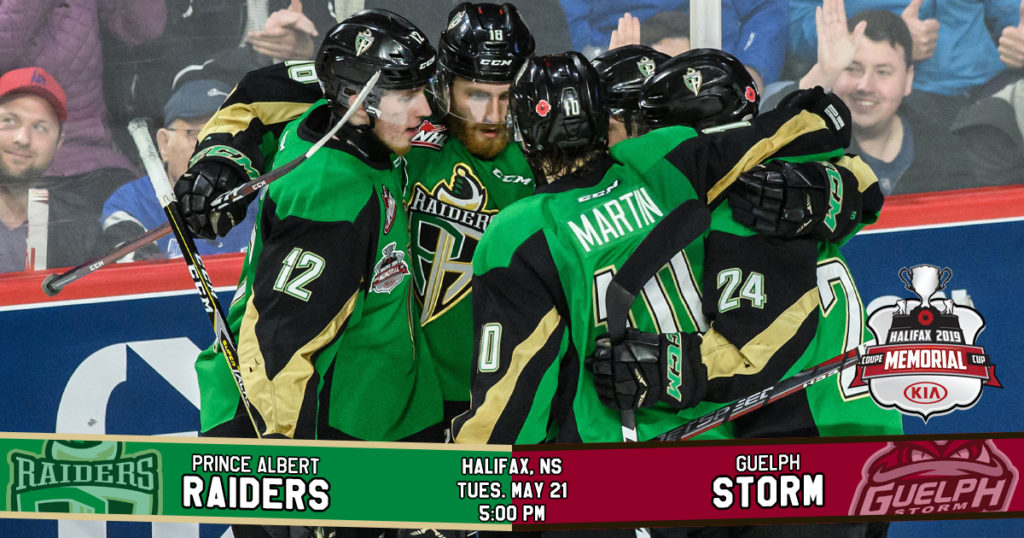 RAIDER REVIEW: The Raiders (0-2) face a must-win game as they wrap up the round robin of the 2019 Memorial Cup Presented by Kia when they take on the J. Ross Robertson Champion Guelph Storm (1-1) of the OHL in Halifax, NS. Last night, the Raiders lost a 6-3 game to the Rouyn-Noranda Huskies. Noah Gregor had a goal and two assists for the Raiders to lead the offence. Cole Fonstad also had a goal and an assist. Tyler Hinam had two goals for the Huskies, while Félix Bibeau, Noah Dobson, and Joël Teasdale picked up a goal and an assist. Ian Scott stopped 27 shots in the loss for the Raiders. Samuel Harvey made 30 saves in the win.

OPPOSITION OUTLOOK: The Guelph Storm posted a 40-18-6-4 record to place them fourth in OHL’s Western Conference. The Storm trailed in each of their series, including erasing a three-games-to-none deficit against the London Knights, en route defeating the Ottawa 67’s to claim the J. Ross Roberston Trophy. Nate Schnarr was the leading point-getter for the Storm with 34 goals and 68 assists in the regular season. Nick Suzuki led the way in the OHL Playoffs, putting up 16 goals and 26 assists in 24 games. The Storm opened the Memorial Cup with a 5-2 win over the Rouyn-Noranda Huskies before falling to the host Halifax Mooseheads 4-2 on Sunday night.

ON FIRE: Noah Gregor has been the offensive catalyst for the Raiders over the last three games. The San Jose Sharks prospect has been involved in the Raiders’ seven goals scored over that span, giving the Beaumont, AB product four goals and three assists. Gregor leads the Raiders in Memorial Cup scoring with four points (two goals, two assists) in two games, and is tied for third in tournament scoring with Alexey Toropchenko of the Guelph Storm.

DOUBLING UP: With a goal and an assist on Monday night, Cole Fonstad recorded his first multi-point effort since Game 4 of the Raiders’ Round 1 series against the Red Deer Rebels. During the regular season, Fonstad had multiple points in 23 games. The Montreal Canadiens prospect’s offensive production has picked up over the past few games as he has points in three of his last five contests. In that stretch, he has a goal and three assists.

CAPTAIN’S GOAL: Brayden Pachal snapped a 22-game goalless drought with his first-period marker on Monday night. It was the Estevan product’s first goal since Game 2 of the Raiders’ Round 1 series against the Red Deer Rebels. The Raiders captain led the team in scoring by a defenceman during the regular season with 15 goals and 36 assists.

NEXT UP: A win over Guelph on Tuesday night will put the Raiders into a tiebreaker scenario to be fully determined following the final game of the round robin between Halifax Mooseheads (2-0) and the Rouyn-Noranda Huskies (1-1). A loss eliminates the Raiders from the 2019 Memorial Cup Presented by Kia.