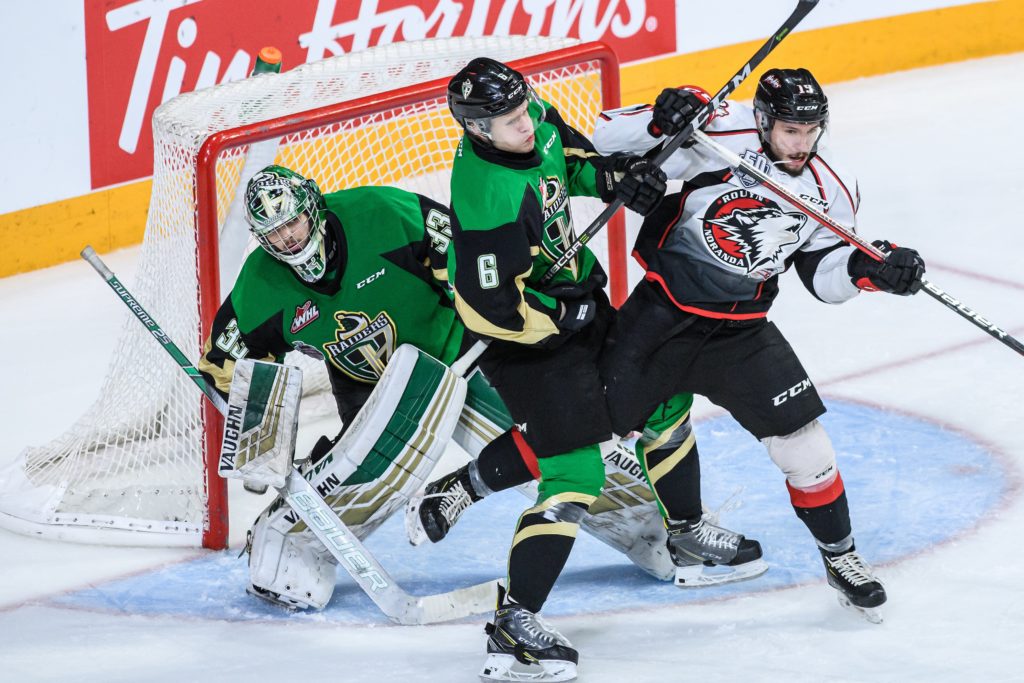 Halifax, NS – The Prince Albert Raiders (0-2) had a better effort on Monday night, but fell 6-3 to the Rouyn-Noranda Huskies (1-1) at the 2019 Memorial Cup Presented by Kia in Halifax, NS.

Noah Gregor led the way offensively for the Raiders with a goal and two assists in the contest. Cole Fonstad also had a goal and an assist. Tyler Hinam had two goals for the Huskies. Félix Bibeau, Noah Dobson, and Joël Teasdale each picked up a goal and an assist for Rouyn-Noranda.

The Raiders got off to a better start in Monday’s game and had the best early chance. Parker Kelly toe-dragged into the centre of the zone, snapped a shot that beat Samuel Harvey but not the post.

Despite the early pressure from the Raiders, Rouyn-Noranda opened the scoring. Tyler Hinam pounced on a loose puck in the corner and his shot fooled Ian Scott to find its way into the net 4:34 into the game.

The Raiders responded with a breakaway chance from Brett Leason and Noah Gregor before tying the game. Cole Fonstad drove wide on the right wing and around the net. The Montreal Canadiens prospect tucked it under Samuel Harvey’s skate on the wraparound attempt for his first of the Memorial Cup at the 8:32 mark.

Later, captain Brayden Pachal gave the Raiders their first lead of the Memorial Cup. After Leason kept the puck alive in the Huskies’ end and Jeremy Masella outmuscled a defender, Gregor collected the puck and found a pinching Pachal coming off the point and buried the one-timer opportunity with 6:13 to play in the opening period.

Before the end of the first, the Huskies tied the game with a power-play goal. Rouyn-Noranda worked a bouncing puck around the zone until it found Joël Teasdale at the side of the net. Teasdale lifted a shot over Scott with 1:28 to play in the period.

With 7:01 to play in the middle frame, the Huskies took the lead back. Jakub Lauko dug the puck out from behind the net and found Félix Bibeau alone in the slot. Bibeau’s quick shot got through Sergei Sapego trying to block the shot and Scott to put Rouyn-Noranda up 3-2.

The Raiders tied it up with 2:17 to play in the second. Fonstad gained the zone and left a pass for Gregor. The San Jose Sharks prospect didn’t get all of his first shot, but picked up his own rebound and snapped it past Harvey for his second of the tournament.

Just after Gregor’s goal, Scott turned aside the Huskies at the other end. Alex Beaucage was set up with a one-timer, but Scott slid across to make the pad save, keeping it a 3-3 game after two periods.

Late in the third, the Huskies broke the tie. Noah Dobson skated down the right win and put a shot on goal. It was stopped, but puck pounced off a skate in front to Hinam who buried his second of the night with 4:32 remaining.

Scott was pulled for the extra attacker, but the Huskies hit the empty net as Dobson collected his second point of the night with the goal with 1:41 to play.

Scott made 27 saves in the loss for the Raiders. Harvey stopped 30 Raider attempts on goal for the win.

The Raiders play a must-win game on Tuesday night against the OHL Champion Guelph Storm (1-1). A win puts the Raiders in a tiebreaker game as at least two of the four teams in the tournament will have a 1-2 record. Puck drop is 5 p.m. Listen to the game on 900 CKBI with Trevor Redden or watch on Sportsnet.