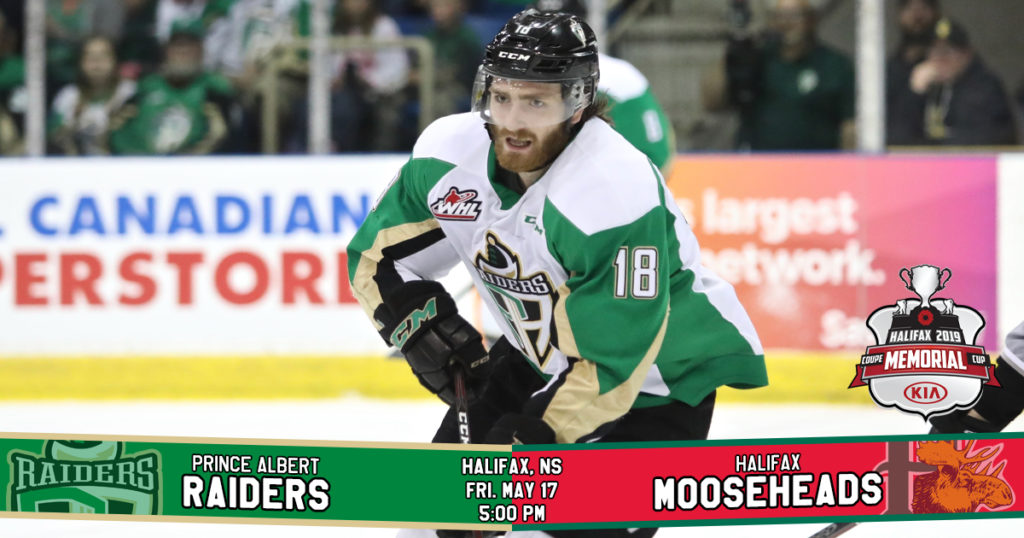 RAIDER REVIEW: The Raiders open the 2019 Memorial Cup Presented by Kia tonight in Halifax, NS against the host Mooseheads of the QMJHL. In their last game, the Raiders won the Ed Chynoweth Cup by defeating the Vancouver Giants 3-2 in overtime of Game 7 of the 2019 Rogers WHL Championship Series. Dante Hannoun was the overtime hero with his goal with 1:35 left in overtime. Noah Gregor had both of the Raiders’ goals in regulation and set up Hannoun’s winner. Parker Kelly had a pair of assists in the win. Ian Scott made 24 saves in the series-clinching win and was named the 2019 WHL Playoffs MVP.

OPPOSITION OUTLOOK: The Halifax Mooseheads enter the 2019 Memorial Cup as the host team. They finished in first in the QMJHL’s Eastern Conference with a 49-15-2-2 record. In the QMJHL Playoffs, the Mooseheads won their conference and faced off against the Rouyn-Noranda Huskies for the President Cup, but lost the series four games to two. Raphaël Lavoie led the Mooseheads in scoring in their playoff run with 20 goals and 12 assists in 23 games. Samuel Asselin paced Halifax during the regular season with 48 goals and 38 assists in 69 games.

BACK AT THE MEMORIAL CUP: The Raiders are entering their first Memorial Cup since 1985. In that tournament, the Raiders took home the trophy following a 6-1 win over Shawinigan in the Memorial Cup final.

LEASON LEADING: Like the regular season, the Raiders were led in scoring during the 2019 WHL Playoffs by Brett Leason. The Calgary, AB product had 10 goals and 15 assists in 22 games played. He was followed closely by Dante Hannoun (14 goals, 10 assists) and Noah Gregor (13 goals, 11 assists) who both had 24 points.

DOUBLING UP: Noah Gregor’s two-goal performance in Game 7 of the WHL Playoffs was his third multi-goal game in the post-season. Parker Kelly and Aliaksei Protas also had three multi-goal games during the playoffs. Gregor and Kelly and three two-goal games, while Protas had two hat tricks and a two-goal outing.

PARKER’S POINTS: With his two assists on Monday, Parker Kelly led the 2019 Rogers WHL Championship Series in scoring with 10 points (four goals, six assists). The Ottawa Senators draft pick had points in five of the seven games in the series. In each of those games, the Camrose, AB product had two points. Dante Hannoun and Brett Leason each had five goals and four assists to land in a tie for second in the series.

STACKING UP: WHL Goaltender of the Year and 2019 WHL Playoffs MVP Ian Scott led the WHL post-season with a 1.96 goals-against average, a 0.925 save percentage, and eight shutouts. The Toronto Maple Leafs prospect also led the CHL during the playoffs with those numbers.

NEXT UP: The Raiders have two days off before taking on the President Cup Champion Rouyn-Noranda Huskies of the QMJHL. Puck drop is 5 p.m. CST. The game can be seen on Sportsnet, or listen to Trevor Redden on 900 CKBI.