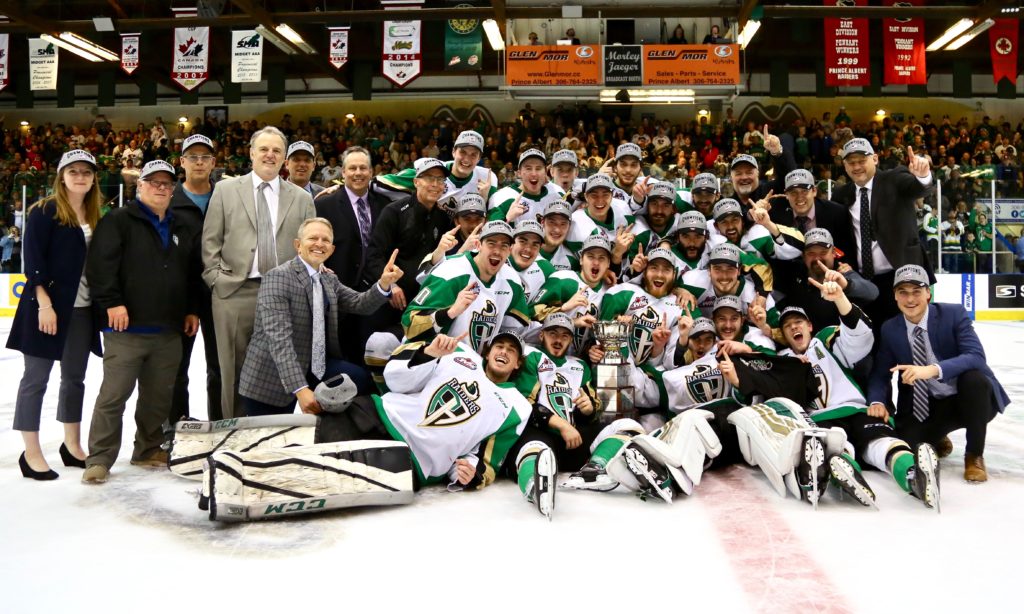 For the first time since 1985, the Prince Albert Raiders are the WHL Champions!

Dante Hannoun scored with 1:35 left in overtime to clinch the Ed Chynoweth Cup with a 3-2 victory in Game 7 of the 2019 Rogers WHL Championship Series on Monday night at the Art Hauser Centre.

With the win, the Raiders won the best-of-seven series four games to three to advance to the 2019 Memorial Cup presented by Kia.

With an assist on the game-winning goal, Noah Gregor finished the game with a three-point night as he scored both of the Raiders’ goals in regulation. Parker Kelly also had a pair of assists in the win for the Raiders. Milos Roman had both of Vancouver’s goals.

Ian Scott was named the Most Valuable Player of the 2019 WHL Playoffs following the game. In the Raiders’ run, Scott had a 16-6-1 record, 1.96 goals-against average, 0.925 save percentage, and five shutouts. He led all four major statistical goaltending categories in the WHL.

This is the second time in team history that the Raiders have taken the title as the WHL’s top team since entering the league for the 1982-83 season.

The teams showcased their talent in the opening period. After the Raiders jumped out to an early lead in the shot total, the Giants stormed back. The best chance of the period came off the stick of Tristen Nielsen. He stepped in to a shot that beat Scott, but hit the cross bar.

The Giants opened the scoring in the second period. Bowen Byram skated down the left wing and cut in towards goal. He put a pass across the crease to Roman who buried his chance 4:45 into the frame. It was Roman’s third goal of the playoffs.

After the goal, the Raiders turned up the pressure. Eventually, they broke through with 5:05 remaining in the middle frame. Gregor collected the puck at the top of the right faceoff circle. He skated to the middle, hesitated and turned towards goal. The San Jose Sharks prospect beat David Tendeck with his shot to even the score at 1-1 with his 12th of the post-season.

Noah Gregor evens this game up with a beauty! The @SanJoseSharks prospect gets the @PARaidersHockey on the board! #WHLChampionship pic.twitter.com/59VoAcuym2

About five minutes into the third, Gregor struck again. Trailing the play, he took a handoff from Sergei Sapego and his quick shot got past Tendeck to put the Raiders up 2-1 at the 4:25 mark of the third.

Noah Gregor gets his second goal of the night! The @PARaidersHockey lead 2-1 in the third period!#WHLChampionship pic.twitter.com/WCLYqkiA6r

Four minutes later, the Giants levelled the score with a power-play goal. Jared Dmytriw put a backhander on net that was stopped by Scott. Roman followed up the play and put the rebound past the Raiders netminder to make it 2-2 with 11:30 to play in regulation.

Before the end of regulation, the Raiders had three great chances to get their third goal of the game. First, Cole Fonstad was sprung on a partial breakaway, but the Montreal Canadiens prospect hit the cross bar.

Later, Brett Leason’s shot was stopped by Tendeck, but the puck was popped up into the air. He gloved the puck down, but put his shot through the blue paint.

Then in the waning seconds of regulation, Leason found Zack Hayes creeping in from the blue line. The defenceman sent his shot just wide of the right post for the last quality chance of the third period.

In the overtime, The Raiders were able to kill off a delay of game penalty with 5:33 to go.

Two minutes after the power play expired, Hannoun scored the series-clinching goal. Gregor circled behind the net and up the right wing. At the top of the faceoff circle, he changed directions and skated back towards the net. Gregor then hit Hannoun with a backdoor pass and the Delta, BC product tapped in the game-winning goal. It was Hannoun’s 14th goal of the playoffs, which led the post-season.

The celebration is on at the Art Hauser Centre! @hannoun19 wins the 2019 @Rogers #WHLChampionship Series for @PARaidersHockey in overtime! pic.twitter.com/JXqTrzMLZm

Scott finished the game with 24 saves. Tendeck made 37 saves in the loss for the Giants.

The Raiders will represent the WHL at the 2019 Memorial Cup presented by Kia, which begins on Friday night in Halifax, NS. The Raiders will take on the host Halifax Mooseheads in the first game of the round robin on Friday. Game time is 5 p.m. CST.