Leason Named WHL On the Run Player of the Week 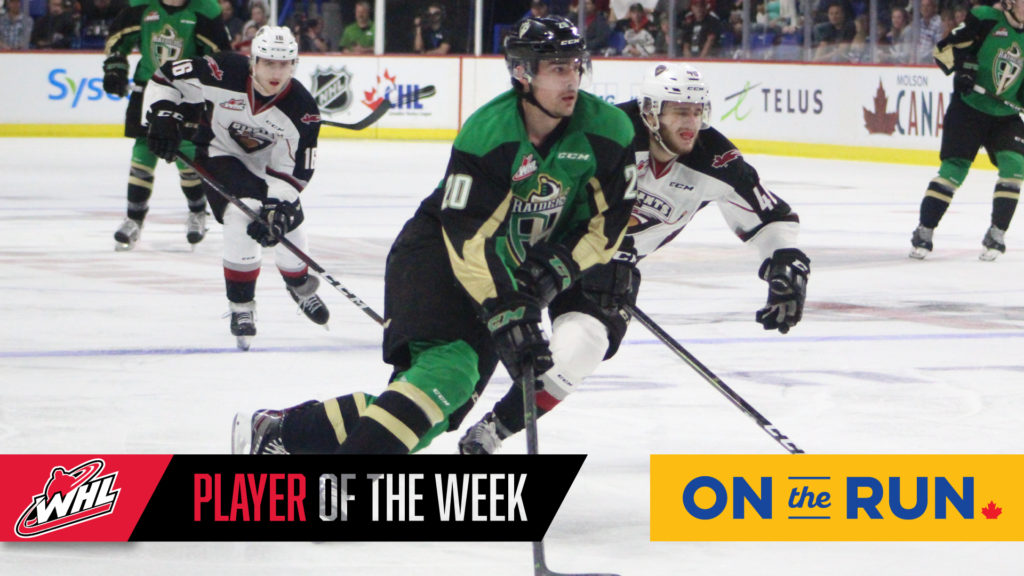 Calgary, Alta. – The Western Hockey League announced today that Prince Albert Raiders forward Brett Leason has been named the WHL On the Run Player of the Week for the week ending May 12, 2019.

Leason, a 2019 NHL Draft prospect, recorded seven points (3G-4A) in four games. After Leason and the Raiders’ performance against the Vancouver Giants during the past week, the 2019 Rogers WHL Championship Series is now tied 3-3.

This is the third week in a row that a member of the Raiders has been named WHL On the Run Player of the Week. Dante Hannoun and Aliaksei Protas won the last two.

Tuesday, Leason contributed four points (2G-2A) to the Raiders tally in a 8-2 domination over the Giants in Game 3. Leason was strong on the power play, earning one goal and two assists on the man-advantage. Outside of his power play success, Leason scored Prince Albert’s third goal of the game at even strength. To end his night, Leason was awarded the first star of the game and the WHL Championship Player of the Game.

In Game 4 on Wednesday, Leason was the hero for the Raiders as he scored the lone goal of the game in a 1-0 victory over the Giants. Scoring at 4:21 into the final period of regulation, Leason used his speed to create room in the Giants’ zone where he shot the puck blocker side, finding the back of the net.

Despite the Raiders’ loss in Game 5 on Friday night, Leason still managed to earn two even-strength assists in the 4-2 game; bringing his points total to seven (3G-4A) for the week.

The 6-foot-4, 199-pound right wing has continued his breakout regular-season success into the 2019 WHL Playoffs, recording 25 points (10G-15A) in 21 games. Combined, Leason has 28 points (10G-18A) in 32 WHL Playoffs games for his career including, three power-play goals and four game-winning goals.

Leason was selected in the third round, 50th overall by the Tri-City Americans in the 2014 WHL Bantam Draft. The Calgary, Alta. native has appeared in 190 WHL regular season games, posting 140 points (60G-80A), including eight power-play goals, nine short-handed goals, and 13 game-winning goals. The 20-year-old has also been identified by NHL Central Scouting for selection at the 2019 NHL Draft, giving him a 25th overall ranking among North American skaters on the NHL Central Scouting final rankings.

Leason and the Raiders will be back in action against the Giants for Game 7 of the 2019 Rogers WHL Championship series tonight at the Art Hauser Centre. The winner will advance to the 2019 Memorial Cup presented by Kia in Halifax, N.S., from May 17 to 26, as the WHL’s representative.