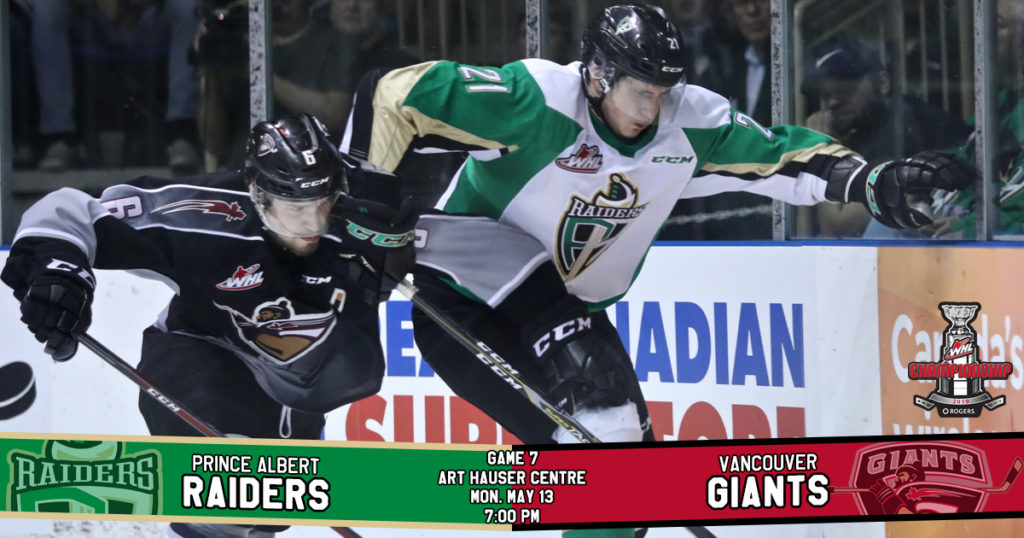 GAME 7s: The Raiders are playing their first Game 7 of the 2019 WHL Playoffs tonight. In their last Game 7 appearance, the Raiders fell 5-4 to the Warriors in Moose Jaw in Round 1 of last year’s playoffs. The Raiders’ last win in a Game 7 came on April 10, 1996. It was a 5-1 triumph over the Regina Pats in the second round of the playoffs. Steve Kelly had a pair of goals on the Raiders’ win.

DOUBLING UP: For the second time in three games, Parker Kelly recorded a pair of goals. The Ottawa Senators prospect has four two-point performances against the Giants in the 2019 Rogers WHL Championship Series. The other two nights were both two-assist games. Kelly has eight points in the series, which is tied for second-most between both teams. In total, Kelly has three two-goal games and a pair of two-assist contests. The Camrose, AB product has eight goals and seven assists while playing in all 22 games in the WHL Playoffs.

PROTAS POWER: Aliaksei Protas kept his point streak alive with his assist on Parker Kelly’s goal late in the first period. The Belarusian forward is now tied for the longest point streak of the 2019 WHL Playoffs at eight games with teammate Brett Leason, who saw his point streak snapped last night. With the assist, Protas is in sole possession of third in team scoring with 22 points (12 goals, 10 assists) in 22 playoff games.

HALF A CENTURY: Sunday night’s game marked Noah Gregor’s 50th career game in the WHL Playoffs. The San Jose Sharks prospect has totalled 22 goals and 22 assists in those contests. Gregor is fourth in team scoring during the 2019 WHL Playoffs with 11 goals and 10 assists through 22 contests.

NEXT UP: The winner of tonight’s Game 7 will move on to represent the WHL at the 2019 Memorial Cup presented by Kia in Halifax, NS. The first game of the Memorial Cup features the WHL against the host Halifax Mooseheads of the QMJHL on Friday, May 17. Puck drop is at 5 p.m.