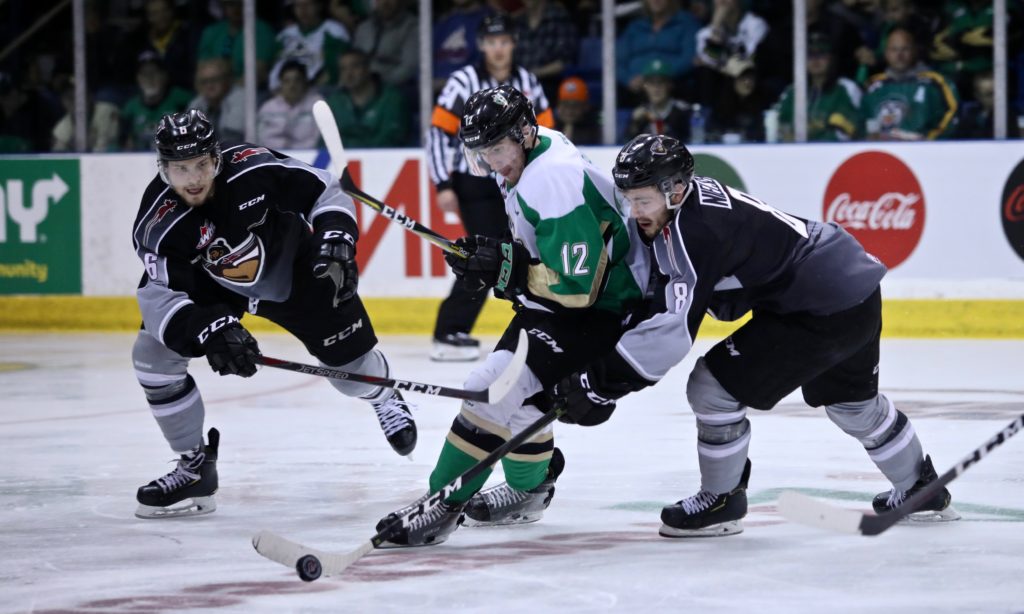 Prince Albert, SK – There will be a Game 7 in the 2019 Rogers WHL Championship Series.

On Sunday night, the Prince Albert Raiders lost a 4-2 game to the Vancouver Giants in Game 6 at the Art Hauser Centre. The best-of-seven series is tied at three games apiece.

Parker Kelly had both of the Raiders’ goals in the loss. Davis Koch had two goals for the Giants, while Jared Dmytriw had a goal and an assist.

The Raiders got out a to quick start in Game 6, opening the scoring just 53 seconds into the game. Justin Nachbaur fed the puck to Kelly, but his initial shot was stopped. The Ottawa Senators prospect kept with the play, found the puck and threw it back towards the front of the goal. The puck bounced off David Tendeck and in for Kelly’s seventh goal of the WHL Playoffs.

Just 53 seconds in & we have our first goal! @Senators prospect @Parks_17 puts @PARaidersHockey ahead early on! #WHLChampionship pic.twitter.com/Qu9elxp8na

Six minutes later, the Giants evened the score. Milos Roman cut through the zone to set up the play. When he lost it, the puck eventually found Koch in the corner. The Giants forward cut to the net and put a backhanded shot past Scott for his fourth of the post-season at the 6:58 mark.

The Giants took their first lead of the game with 4:43 to play in the first. Dmytriw found Owen Hardy on a three-on-two rush and Hardy’s shot found the back of the net for his fifth goal of the playoffs.

Before the end of the period, Kelly struck again. Aliaksei Protas got his own rebound and fed Kelly at the top of the crease. Kelly faked to his forehand before scoring with his backhand for his second marker of the game and eighth of the post-season. The goal came with just 33 seconds to play in the period, making it a 2-2 game after the first.

A celly from Kelly again! We’re tied 2-2 after 20 minutes!#WHLChampionship pic.twitter.com/JgO9WWMEYQ

In the second, each team had a great chance to break the deadlock. Noah Gregor took possession at the red line, skated through the zone and behind the net, but was denied on his wraparound attempt. Then in the waning seconds of the middle frame, Dylan Plouffe was left alone at the right faceoff circle. Scott stepped up and got a piece of the attempt to deny the defenceman as time expired.

The Giants restored their lead 3:40 into the third. Lukas Svejkovsky’s shot got through a screen in front and was stopped by Scott. Dmytriw was in right spot and deposited the rebound for his ninth of the post-season.

The Raiders’ best chance to tie it came from Sean Montgomery, who had his rebound attempt from the slot stopped by Tendeck. The puck was loose at the side of the goal, but Protas was unable to bury the secondary rebound attempt.

Koch wrapped up the scoring with 15 seconds to play as he found the empty net.

Scott finished the game with 23 shots in the loss for the Raiders. Tendeck made 36 saves for the win.

The decisive Game 7 of the 2019 Rogers WHL Championship Series will be played on Monday night at the Art Hauser Centre. Puck drop is 7 p.m. Limited standing room tickets are still available for the game here.