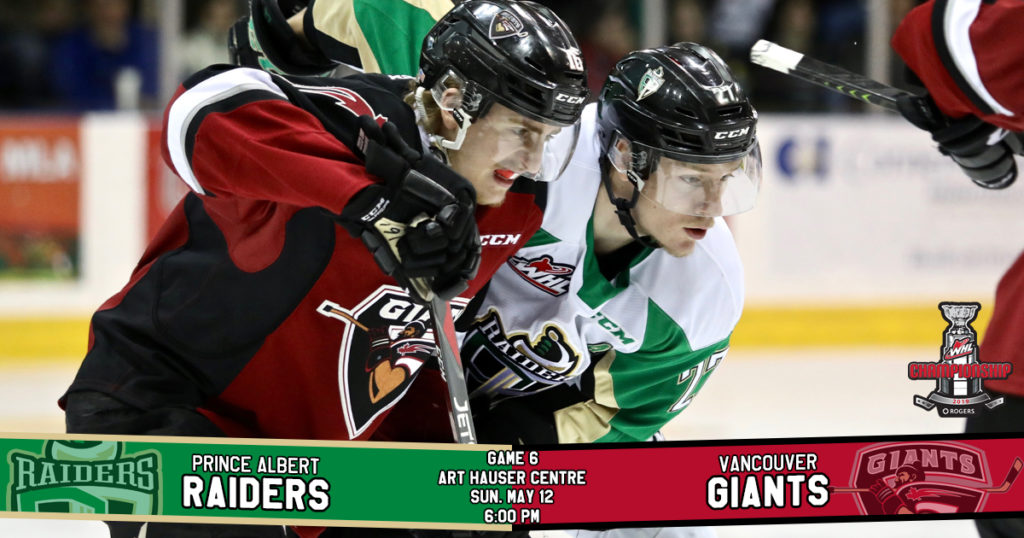 RAIDER REVIEW: The 2019 Rogers WHL Championship Series returns to Prince Albert tonight as the Raiders and Giants square off in Game 6 of the series at the Art Hauser Centre. The Raiders lead the best-of-seven series three games to two. In Game 5 on Friday night at the Langley Events Centre, the Raiders fell 4-3 to the Giants to extend the series. Brett Leason had two assists for the Raiders. Aliaksei Protas, Dante Hannoun, and Noah Gregor were the Raiders’ goal scorers. For the Giants, Brayden Watts and Bowen Byram each had a goal and an assist. Jadon Joseph chipped in with two assists. Davis Koch and Dylan Plouffe also scored. Ian Scott made 26 saves for the Raiders, while David Tendeck stopped 37 shots for the Giants.

STILL STREAKING: With a pair of assists in Game 5 of the 2019 Rogers WHL Championship Series on Friday night, Brett Leason extended his point streak to eight games. His current streak is the longest in the WHL this post-season, picking up seven goals and six assists in that span. Right behind him is teammate Aliaksei Protas, who has points in seven consecutive games. Protas also has seven goals and six assists over his streak.

BACK TO FORM: Cole Fonstad is starting to find his offensive touch. In Game 5 on Friday night, the Montreal Canadiens prospect recorded his first assist in 14 games. His last assist was in Game 4 of the Raiders’ Round One sweep of the Red Deer Rebels. Fonstad now has points in two of his last three games after being held off the scoresheet for 12 games. The Estevan product has two goals and four assists in the 2019 WHL Playoffs.

FOUR MORE: Noah Gregor and Dante Hannoun have been a large part of the Raiders taking a three-games-to-two lead in the 2019 Rogers WHL Championship Series. Both overagers have a goal in four of the five games in the series. Through five games, Hannoun has eight points in the series with Gregor close behind with five points.

NEXT UP: If necessary, the Raiders and Giants will meet in Game 7 of the 2019 Rogers WHL Championship Series on Monday night at the Art Hauser Centre. Puck drop is 7 p.m.