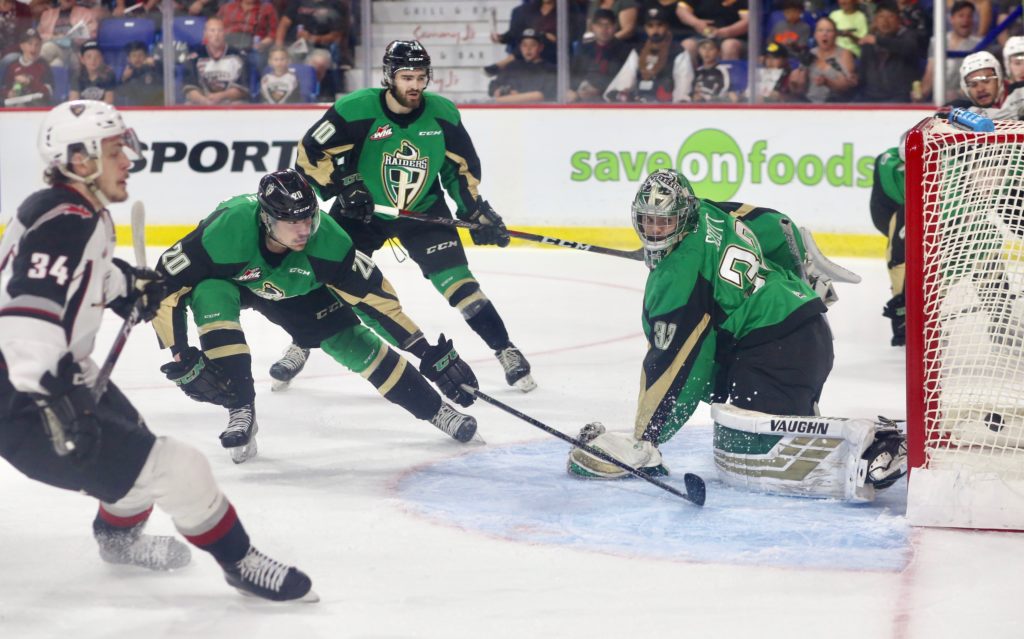 Langley, BC – The 2019 Rogers WHL Championship Series will be decided in Prince Albert.

On Friday night at the Langley Events Centre, the Raiders fell 4-3 in Game 5 of the best-of-seven series for the Ed Chynoweth Cup.

Brett Leason had a pair of assists in the contest for the Raiders. Aliaksei Protas, Dante Hannoun, and Noah Gregor got the Raiders’ goals. Jadon Joseph had two helpers for the Giants. Brayden Watts also had a goal and an assist.

The Giants opened the scoring 7:42 into the first period. Ian Scott stopped the initial shot by Tristen Nielsen, but the rebound found the stick of Watts and he buried the rebound for his seventh goal of the WHL Playoffs.

Just three minutes later, the Raiders tied it up. Sean Montgomery put a shot on goal that was stopped by David Tendeck. Aliaksei Protas found the rebound and snapped a shot past Tendeck with 9:16 to play in the opening frame. It was Protas’ 12th goal of the post-season.

Aliaksei Protas notches his 12th goal of the 2019 WHL Playoffs to tie it up! Psst, he’s a rookie & eligible for the 2019 #NHLDraft. #WHLChampionship pic.twitter.com/f6iy2aKqew

Early in the second, the Raiders took their first lead of the game. Just after a penalty to Brett Leason expired, Hannoun forced a turnover in the Vancouver end. Leason picked up the puck and found Hannoun alone in front of the goal. The Delta, BC product beat Tendeck for his 13th goal of the post-season 2:45 into the frame.

The Giants responded less than a minute later. Bowen Byram’s wrister from the top of the faceoff circle got past Scott at the 3:35 mark of the second, notching his eighth of the WHL Playoffs.

Midway through the period, Vancouver regained its lead. Davis Koch banged home a rebound from Seth Bafaro’s shot for his third of the post-season with 10:36 left to play in the second.

Two minutes later, the Giants doubled their lead. Dylan Plouffe launched a slapshot from the point that beat Scott to make it a 4-2 game for Vancouver. It was Plouffe’s sixth of the playoffs.

With 4:06 to play in the second, the Raiders cut the lead in half. A pass by Ozzy Wiesblatt to Cole Fonstad missed its mark, but Noah Gregor grabbed the puck trailing the play. His quick backhander beat Tendeck and just crossed the goal line to make it a 4-3 game with his 11th of the post-season.

Shortly after his goal, Gregor had another chance. He used his speed to generate a breakaway for himself and skated in on Tendeck. His shot hit the post, but he drew a penalty. However, the Raiders were unable to capitalize.

In the third, the Raiders came out firing and outshot the Giants 15-5 in the final 20 minutes. The best chance to equalize came when Leason got the puck through the defence and looked to have a clean look on Tendeck. Before he was able to get the shot off, Plouffe dove to knock the puck off Leason’s stick and into the corner.

In the final moments of the third, Scott was pulled for the extra attacker. The Raiders were able to get a couple shots on Tendeck, but were unable to draw even.

Game 6 of the 2019 Rogers WHL Championship Series will be played on Sunday evening at the Art Hauser Centre. Puck drop is 6 p.m.

Tickets for Game 6 and 7 will go on sale on Saturday morning at 9 a.m. at the Art Hauser Centre box office. There is a limit of six tickets per patron. Online sales begin at 10 a.m.

Game 7 tickets are non-refundable. If a Game 7 isn’t necessary, the tickets can be used as vouchers for a game during the 2019-20 season.