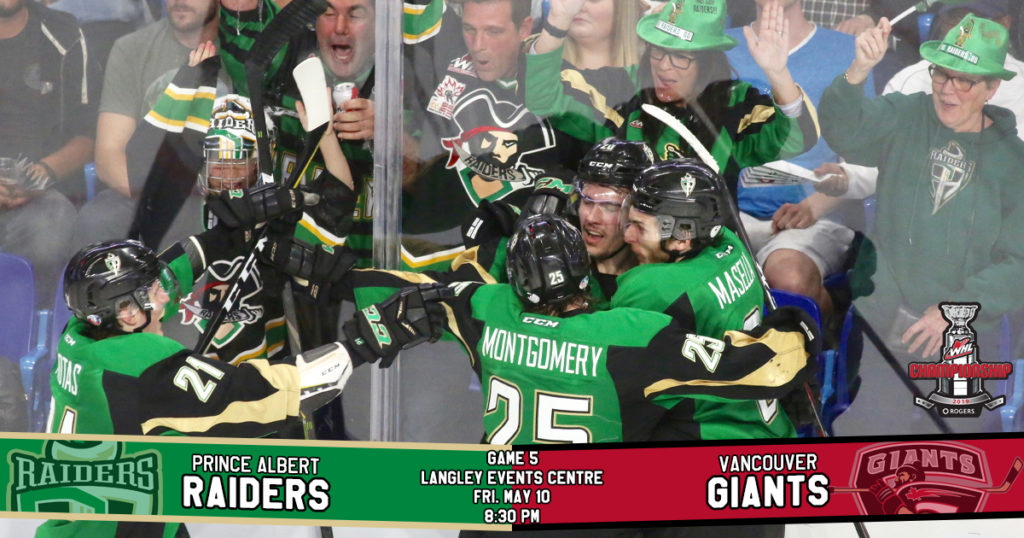 RAIDER REVIEW: The Raiders have a chance to wrap up the 2019 Rogers WHL Championship Series tonight in Game 5 against the Vancouver Giants at the Langley Events Centre. On Wednesday night in Game 4, the Raiders took a three-games-to-one lead in the best-of-seven series with a 1-0 shutout win over the Giants. Ian Scott earned the shutout with a 36-save performance. Brett Leason scored the game’s lone goal at the 4:21 mark of the third period. David Tendeck made 25 saves in a losing effort for the Giants.

STREAKING: Brett Leason extended his goal-scoring streak to four games and his point streak to seven games with his goal during Wednesday night’s win over the Giants. Leason is now tied for the scoring lead in the WHL Playoffs with 23 points with Giants defenceman Bowen Byram. The Calgary, AB product’s point streak is the longest of the season since his 30-game stretch to kick off the year. Leason’s goal also ties him with Noah Gregor for the WHL lead in game-winning goals with four.

SHUTTING THE DOOR: Ian Scott earned his fifth shutout of the WHL Playoffs on Wednesday night at the Langley Events Centre. The Toronto Maple Leafs prospect is tied for second in WHL history with Portland’s Mac Carruth and Edmonton’s Laurent Brossoit for the second-most shutouts in a single post-season run. The record is six, which is shared by Swift Current’s Stuart Skinner and Vancouver’s Dustin Slade.

POINT-PER-GAME: With an assist on Brett Leason’s goal on Wednesday night, Aliaksei Protas extended his point streak to a WHL Playoffs career high of six games. Over the past six games, the Belarusian rookie has six goals and six assists. Protas is averaging a point-per-game in his first WHL Playoffs run. His assist also gave the Raiders their fourth player with 20 or more points in the WHL Playoffs, joining Brett Leason, Dante Hannoun, and Noah Gregor. Protas has 11 goals and nine assists in the WHL Playoffs.

ONE-GOAL GAME: Wednesday night’s game was the third of the Raiders’ run in the WHL Playoffs that finished with a 1-0 score. The Raiders hold a 2-1 record in games with just one goal. The other 1-0 win for the Raiders was a victory in Game 1 of the Eastern Conference Championship against the Edmonton Oil Kings.