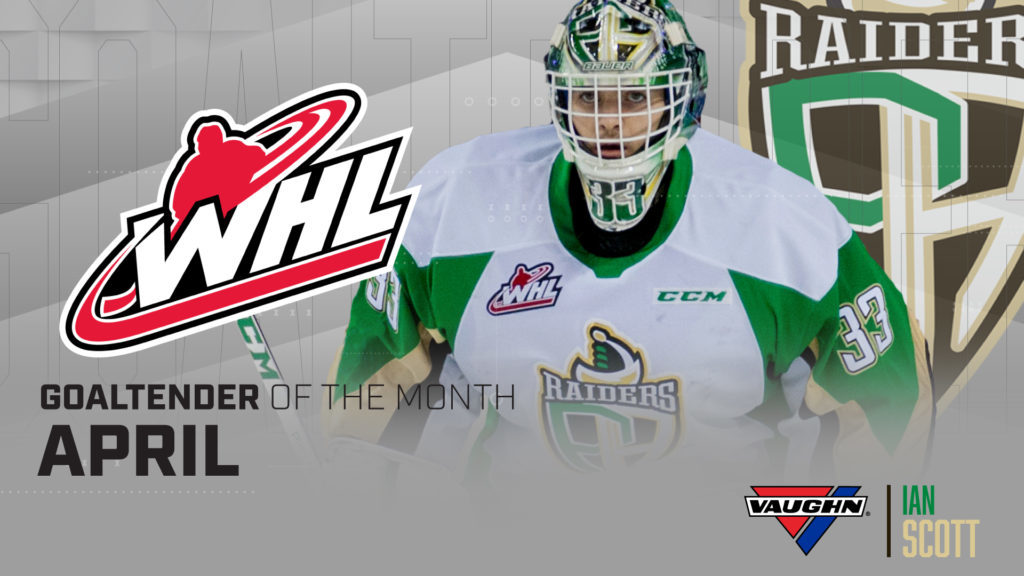 Calgary, Alta. – The Western Hockey League announced today that Toronto Maple Leafs prospect Ian Scott of the Prince Albert Raiders has been named the WHL Vaughn Goaltender of the Month for April 2019.

Scott posted an 8-3-1-0 record in the month of April while maintaining a 1.88 goals-against average and stopping 323 of 346 shots for a .934 save percentage. Scott also recorded three shutouts in the calendar month as the Raiders advanced to the 2019 Rogers #WHLChampionship Series, their first appearance in the series since 1985. For the calendar month, he ranked first in wins, SV%, and shutouts, ranking fourth in GAA.

In the second round of the 2019 WHL Playoffs, Scott and the Raiders bested the Saskatoon Blades in a six-game series. Scott allowed 11 goals over the six-game series, helping the Raiders advance to play the Edmonton Oil Kings in the Eastern Conference Championship.

Against Edmonton, Scott posted a pair of shutouts throughout the six-game series to help guide the Raiders to victory. At the conclusion of the Eastern Conference Championship, Scott was recognized as the WHL Eli Wilson Goaltending Goaltender of the Week and the First Star of the Conference Championship Round.

The ninth-overall selection by the Raiders at the 2014 WHL Bantam Draft, Scott has appeared in 175 WHL regular season games for his career, sporting an 87-64-9-5 record, 2.90 GAA, .905 SV%, and 11 shutouts. April’s honour marks the third time this season Scott has been named the WHL Vaughn Goaltender of the Month.

Scott and the Raiders will open the 2019 Rogers #WHLChampionship Series Friday, May 3 (7:00 p.m. MT) on home ice at the Art Hauser Centre.