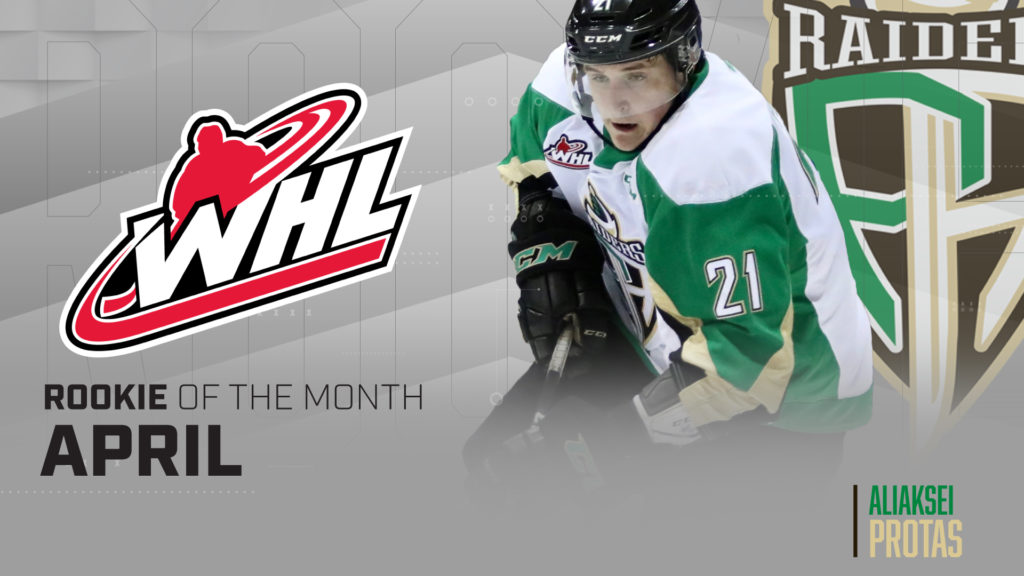 Calgary, Alta. – The Western Hockey League announced today that forward Aliaksei Protas of the Prince Albert Raiders has been named WHL Rookie of the Month for April 2019.

Protas recorded 11 points (9G-2A) and a plus-seven rating in 12 games as the Raiders clinched the Eastern Conference Championship to advance to the 2019 Rogers WHL Championship Series against the Vancouver Giants. The 2019 NHL Draft prospect also impressed with back-to-back hat trick games at the end of the month.

On April 26, Protas recorded his first of two hat trick performances. Scoring Prince Albert’s first, second and fourth goals and assisting on the third goal against the Edmonton Oil Kings, Protas powered the Raiders to a 4-0 victory. For his efforts, Protas was awarded both the WHL’s first star of the night and the first star of the game.

He then repeated his three-point performance the next game against the Oil Kings on April 28, where he collected two even-strength goals and one power-play goal. Again Protas was awarded the first star of the night in the WHL as well as the third star of the game.

In addition to his Rookie of the Month award, Protas was also named the WHL On the Run Player of the Week for the week ending April 28, 2019 and was awarded the second star of the WHL’s Three Stars for the Conference Championship round during the 2019 WHL Playoffs.

During the 2019 WHL Regular Season, Protas recorded 40 points (11G-29A), including one power-play goal and two game-winning goals in 61 games. The Vitebsk, Belarus product also competed early this season in the 2019 IIHF Division I World Junior Championship for Team Belarus in Fussen, Germany and recorded five points (2G-3A) in five games.

Protas and the Raiders will host the Vancouver Giants on Friday, May 3 (7:00 p.m. MT) for Game 1 of the 2019 Rogers WHL Championship Series at the Art Hauser Centre in Prince Albert, Sask.

WHL Rookie of the Month