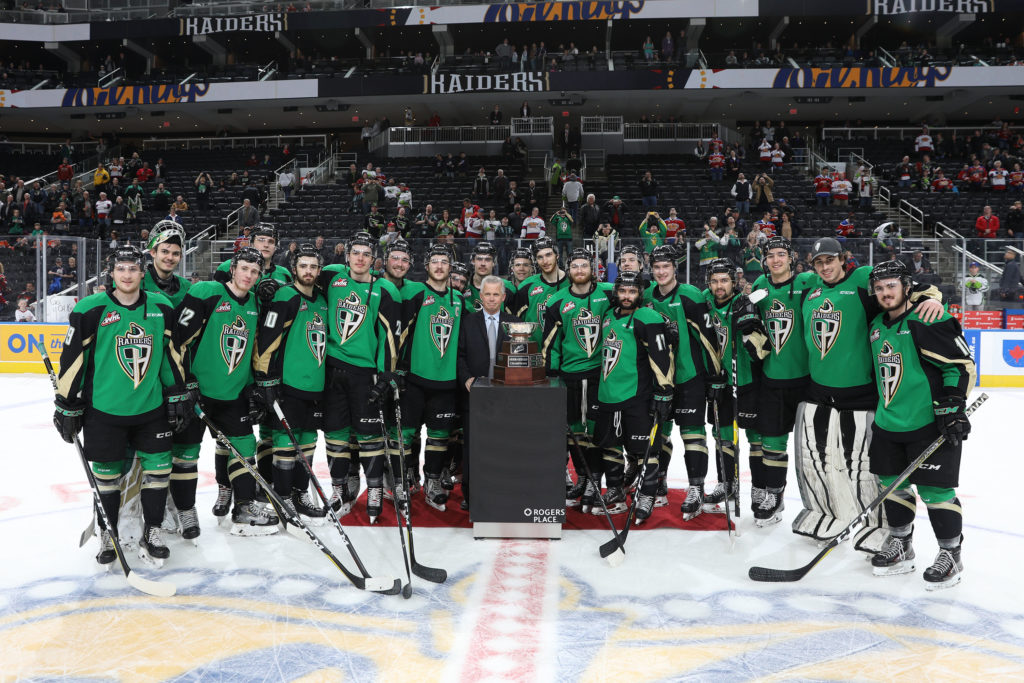 Edmonton, AB – The Prince Albert Raiders are heading to the 2019 Rogers WHL Championship.

The Raiders knocked off the Edmonton Oil Kings 4-2 Game 6 of the Eastern Conference Championship on Sunday afternoon at Rogers Place, defeating the Oil Kings four games to two.

Aliaksei Protas recorded a hat trick in his second consecutive game to pace the offence. Sean Montgomery also had a pair of assists in the win.

The Raiders advance to the WHL Championship for the first time since the 1984-85 season where they went on to win the league and then the Memorial Cup.

The Oil Kings opened the scoring midway through the first period. Trey Fix-Wolansky’s point shot through traffic and a deflection attempt by Quinn Benjafield trickled through Ian Scott with 8:11 to play in the frame.

Protas evened the score later in the period on the power play. From the right faceoff circle, the Belarusian rookie snapped a shot past Dylan Myskiw on the short side for his ninth of the WHL Playoffs with 5:55 to go in the period.

Just 39 seconds later, Protas gave the Raiders the lead. The Oil Kings tried to pass the puck cross-ice in front of their own goal, but Protas got in the way and knocked the pass past Myskiw for his second of the night and 10th of the WHL Playoffs to lead the league.

With 2:02 to go in the first, the Raiders struck again on the power play. Dante Hannoun found Noah Gregor at the right faceoff circle and the San Jose Sharks prospect wired a shot past Myskiw on the glove-hand side for his seventh of the post-season to put the Raiders up 3-1 after the first.

Early in the second, the Raiders came within inches of making it a three-goal game. Gregor beat Myskiw, but his shot hit the post and bounced out.

Midway through the period, the Oil Kings cut the lead in half with a shorthanded marker. Benjafield found Fix-Wolansky alone in front of the net. Fix-Wolansky beat Ian Scott with a quick shot to make it a 3-2 game with 9:19 to play in the second.

The Raiders restored their two-goal advantage with 3:20 to play in the middle frame. With a diving pass attempt, Leason sent Protas in alone on a breakaway. Myskiw cheated to his glove side, which gave Protas an empty side of the net to fill with his third of the night, giving him hat tricks in back-to-back games.

The Oil Kings pressed to solve Scott in the final period, but were denied. The Raiders’ penalty killers were able to keep Edmonton at bay for the entire frame, including a stretch of five-on-three action midway through the frame.

In total, Scott turned away 14 shots during the third period to preserve the win. The Toronto Maple Leafs prospect finished the game with 32 saves. At the other end, Myskiw stopped 20 shots in the loss.

The 2019 Rogers WHL Championship begins on Friday, May 3 at the Art Hauser Centre. Puck drop is 7 p.m.

Tickets for Games 1 and 2, which are Friday and Saturday night, go on sale on Tuesday morning at 9 a.m. There is a limit of six per person. Online sales will begin at 10 a.m.