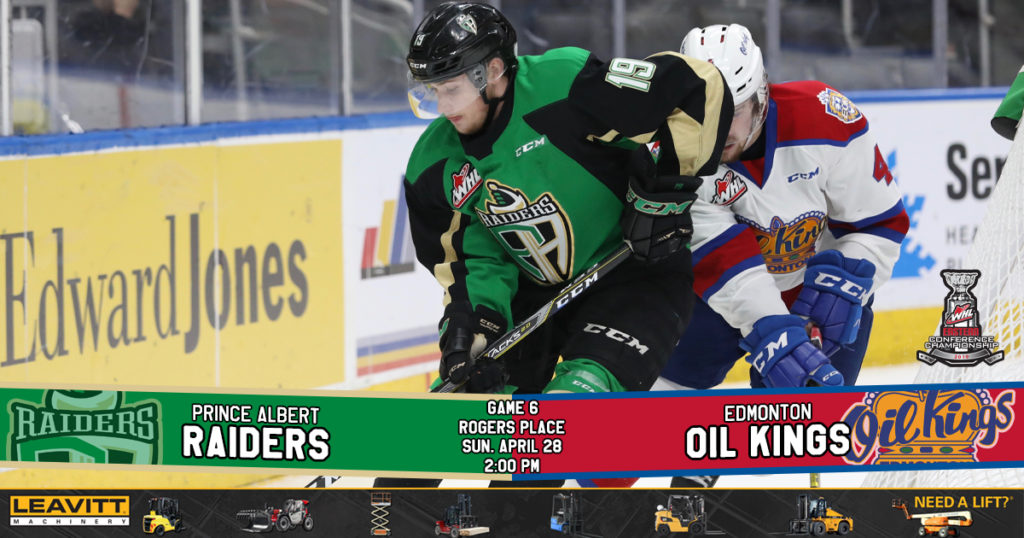 RAIDER REVIEW: The Raiders head back to Edmonton this afternoon to take on the Oil Kings in Game 6 of the Eastern Conference Championship at Rogers Place. In Game 5 on Friday night, the Raiders took the lead in the series with a 4-0 win at the Art Hauser Centre. Aliaksei Protas had a hat trick and an assist to pace the Raiders in the win. Brett Leason also had a goal and an assist. Kaiden Guhle and Sergei Sapego each chipped in with a pair of assists. Ian Scott stopped 24 shots for the shutout. Dylan Myskiw made 26 saves in the loss for the Oil Kings.

VS. EDMONTON: The Raiders lead the best-of-seven series 3-2. The Raiders won the regular season series against the Oil Kings with a record of 3-1.

HAT TRICK HERO: Aliaksei Protas recorded the first hat trick of his WHL career in Friday night’s Game 5 win over the Edmonton Oil Kings. He is the third Raider to tally a hat trick this season, joining Dante Hannoun and Sean Montgomery. The only time the Belarusian rookie has record multi-goal games has been in the 2019 WHL Playoffs. With an assist as well on the night, the 2019 NHL Draft eligible prospect tallied the first four-point game in the league. Protas jumped to fourth in team scoring with eight goals and four assists after Friday’s performance.

SHUTTING THE DOOR: Ian Scott backstopped the Raiders to his second shutout of the Eastern Conference Championship and third overall in the WHL Playoffs on Friday night. The Toronto Maple Leafs prospect is tied for the CHL Playoffs lead in shutouts with Niagara’s Stephen Dhillon and Rouyn-Noranda’s Samuel Harvey. Scott now has 14 career shutouts with the Raiders between the regular season and WHL Playoffs.

GUHLE’S ASSISTS: Rookie defenceman Kaiden Guhle picked up his first multi-point performance in the WHL Playoffs with a pair of assists in Friday night’s win. The Sherwood Park, AB product recorded two multi-assist performances during the regular season in back-to-back games on Dec. 15 and 27.