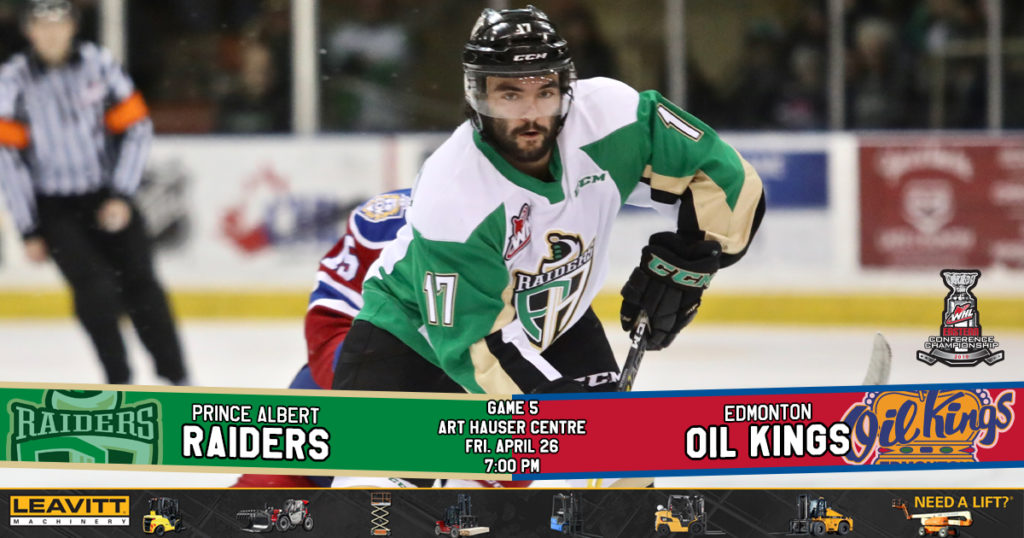 RAIDER REVIEW: The Raiders host the Edmonton Oil Kings for Game 5 of the Eastern Conference Championship tonight at the Art Hauser Centre. In Game 4 on Wednesday in Edmonton, the Raiders evened the series with the Oil Kings with a 2-1 win. Brett Leason and Noah Gregor scored the Raiders’ goals in the win, with Gregor’s holding up as the game winner. Wyatt McLeod scored late in the third to bring the Oil Kings back within one, but it was as close as the home team came. Ian Scott stopped 25 shots to pick up the win for the Raiders. Dylan Myskiw made 25 saves in the loss.

VS. EDMONTON: The best-of-seven series is tied 2-2. The Raiders won the regular season series against the Oil Kings with a record of 3-1. Including this year’s Eastern Conference Championship, the Raiders have won seven of the last 10 meetings between the two teams at the Art Hauser Centre.

BACK IN THE GOAL COLUMN: Brett Leason snapped his eight-game goal-scoring drought on Wednesday night in Edmonton when he recorded the game’s first goal. His last goal came in the series opener of Round 2 against the Saskatoon Blades on April 5 at the Art Hauser Centre. Leason has four goals and nine assists in 13 games during the 2019 WHL Playoffs, which places him third on the team in scoring during the post-season.

GREGOR’S GAME WINNER: Noah Gregor’s goal in the third period ended up being the game winner in Game 4 on Wednesday night. It was the third game-winning goal scored by the San Jose Sharks prospect in the 2019 WHL Playoffs. Gregor is tied for the league lead in game-winning goals with Riley Woods of the Spokane Chiefs.

DOUBLE DIGITS: With an assist on Noah Gregor’s game-winning goal on Wednesday night, Sergei Sapego recorded his 10th career point in the WHL Playoffs in 21 career games. In this post-season, the Belarusian blueliner has two goals and five assists in 14 games played. His plus-12 rating during the playoffs is tied for the second highest in the WHL.

HELPING OUT: Ozzy Wiesblatt snapped a stretch of eight consecutive games without an assist in Wednesday night’s win over the Oil Kings. The rookie from Calgary has four goals and two assists in the WHL Playoffs.

NEXT UP: The Eastern Conference Championship heads back to Edmonton for Game 6 on Sunday afternoon at Rogers Place. Game time is 2 p.m. If necessary, Game 7 would be played in Prince Albert on Tuesday night.