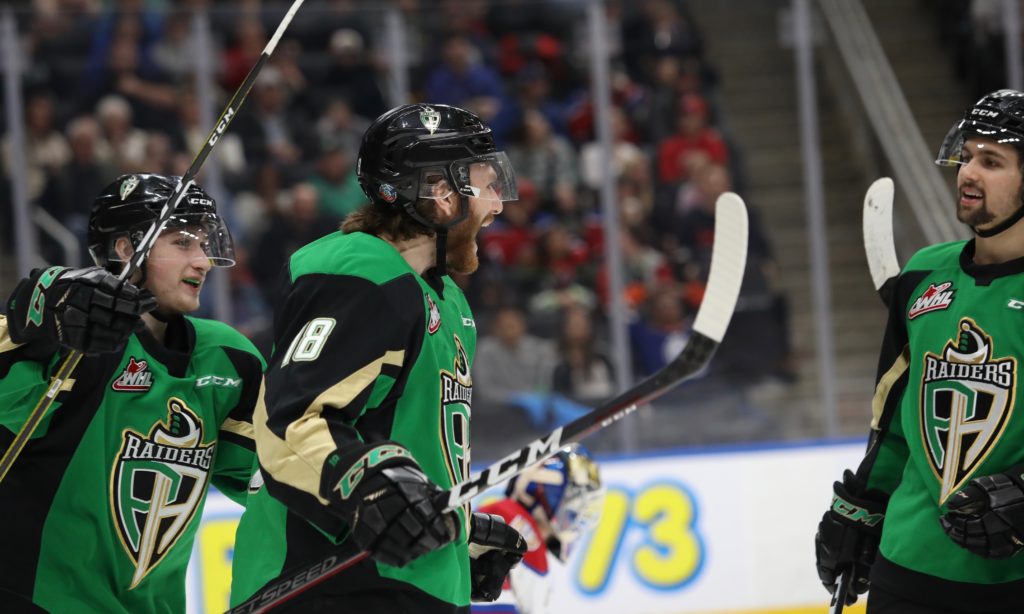 Edmonton, AB – Goals from Brett Leason and Noah Gregor led the Prince Albert Raiders to a 2-1 win over the Edmonton Oil Kings in Game 4 of the Eastern Conference Championship on Wednesday night at Rogers Place.

The effort evened the best-of-seven series at 2-2 as the Raiders regained their home-ice advantage.

The Raiders got off to a quick start in the game with a lot of zone time, supported by a power play in the first five minutes of the contest. Prince Albert put the first six shots on goal before Edmonton managed an attempt on Ian Scott.

Midway through the second, the Raiders had a couple of quality chances to open the scoring. Sean Montgomery deflected a point shot past Dylan Myskiw, but off the post. Shortly after, Cole Fonstad turned in front of the net and put a shot through Myskiw, but it slid wide of the post.

The Raiders broke through with 6:59 to go in the second period. Just after an Oil Kings’ power play expired, the Raiders kept the puck in Edmonton’s end with a good forecheck by Dante Hannoun. Leason picked up the loose puck, skated into the faceoff circle and snapped a shot through Myskiw to make it 1-0 with his fourth goal of the post-season.

Late in the period, Noah Gregor almost made it a two-goal game. With approximately two minutes to play in the frame, the San Jose Sharks prospect hit the post with his attempt on goal.

Gregor made up for the near miss early in the third period. Just 2:13 into the third, Ozzy Wiesblatt threw a pass out front from behind the goal. Gregor one-timed it from his knee from the bottom of the faceoff circle to beat Myskiw for his sixth of the playoffs.

With 6:06 to play, the Oil Kings cut the lead in half. Quinn Benjafield centered for a cutting Wyatt McLeod. Scott got a piece of the defeceman’s shot, but the puck trickled past the goaltender and into the net.

It was as close as the Oil Kings came on the night. With the goalie pulled, they upped the pressure in the Raiders’ end but were unable to solve Scott again.

Scott stopped 10 of 11 shots faced in the third period as the Toronto Maple Leafs prospect turned aside 25 shots in total for the win. Myskiw made 25 saves in the loss.

The Eastern Conference Championship returns to Prince Albert on Friday for Game 5 of the series. Puck drop is 7 p.m.