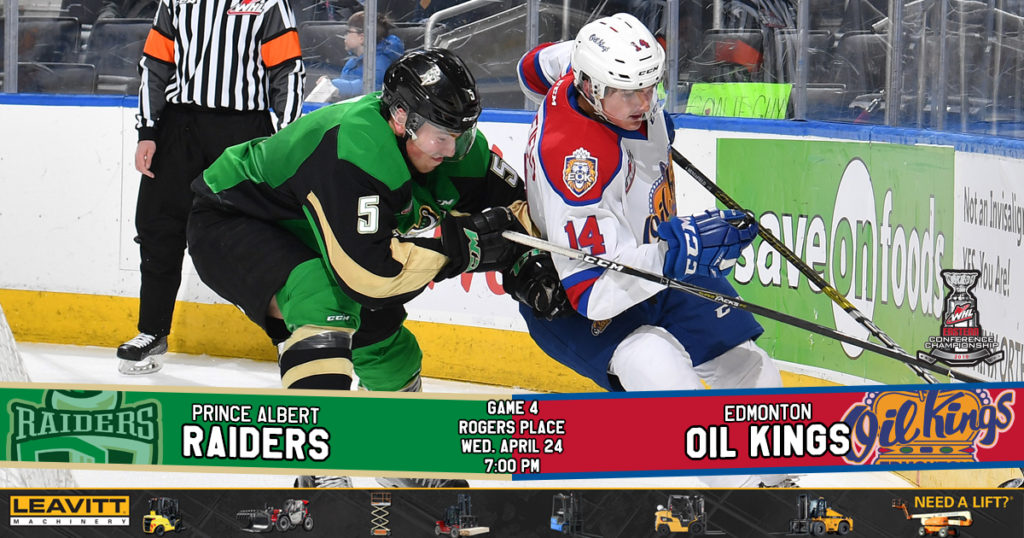 RAIDER REVIEW: The Raiders and the Oil Kings meet for Game 4 of the Eastern Conference Championship tonight at Rogers Place. In Game 3 on Tuesday night, the Raiders fell 5-1 to the Oil Kings in Edmonton. Sean Montgomery scored the Raiders’ lone goal of the game with three-tenths of a second left in the second period. However, the Oil Kings had jumped out to a 4-0 lead prior to Montgomery’s goal. Vince Loschiavo and Trey Fix-Wolansky each had a three-point night for the Oil Kings. Ian Scott stopped 34 shots in a losing effort for the Raiders. Dylan Myskiw made 28 saves in the win for the Oil Kings.

FILLING THE NET: Sean Montgomery’s second period goal was his eighth of the WHL Playoffs, which puts him second in the WHL in goals scored for the post-season behind teammate Dante Hannoun. The goal, which was scored on the power play, brought him into a four-way tie for the league lead in power-play goals in the WHL Playoffs. In 13 games this post-season, Montgomery has nine points to put him in fourth in team scoring.

HELPING HAND: Noah Gregor recorded his ninth assist of the WHL Playoffs on Sean Montgomery’s second period goal on Tuesday night. The San Jose Sharks prospect is tied for the team lead in assists during the post-season. He is also now tied for the team lead in points with 14 (five goals, nine assists) with fellow overager Dante Hannoun (nine goals, five assists). Gregor has at least a point in four of the last five WHL Playoffs games, putting up three goals and four assists in that span.

SHOTS ON GOAL: With seven shots on goal on Tuesday night, Noah Gregor added to his WHL Playoff-leading shot total. Through 13 games, Gregor has put 59 shots on goal, which is nine more than Bowen Byram.