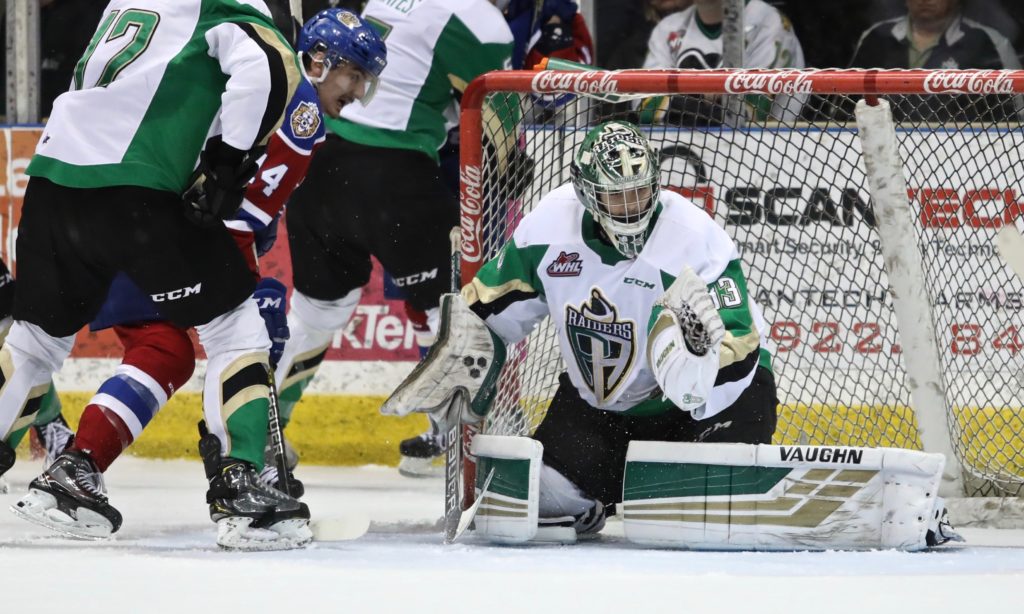 Prince Albert, SK – Ian Scott stopped 26 shots to backstop the Prince Albert Raiders to a 1-0 win over the Edmonton Oil Kings in Game 1 of the 2019 Eastern Conference Championship on Friday at the Art Hauser Centre.

It was Scott’s second shutout of the 2019 WHL Playoffs, giving the Raiders a 1-0 lead in the best-of-seven series.

In the first, the Raiders outshot the Oil Kings 10-7. One of the best chances of the period came when Parker Kelly and Ozzy Wiesblatt entered Edmonton’s zone on a two-on-one rush. Kelly tried to slide the puck over to Wiesblatt, but Dylan Myskiw chipped the puck away from Wiesblatt and just past a trailing Aliaksei Protas.

The Raiders broke through early in the second period. As Wiesblatt made his move to skate behind the net, he threw a puck in front hoping to find Brayden Pachal. Oil Kings defenceman Wyatt McLeod batted the puck into his own goal to put the Raiders up 1-0 1:48 into the frame. Wiesblatt was credited with the goal for his fourth of the WHL Playoffs.

Later in the frame, Brett Leason got behind the defence on a partial shorthanded breakaway. He was able to get a shot on Myskiw, but the Oil Kings netminder deflected it over the net.

The Raiders’ best chance to increase their lead in the second period came from the stick of Sean Montgomery. He pounced on a turnover at the side of the goal and was left alone in front of the net, but Myskiw stopped his backhand attempt. The puck was still loose in the crease, but Protas wasn’t able to lift it over Myskiw’s pad.

The Oil Kings upped the pressure in the third period, but Scott was able to keep them at bay. The Toronto Maple Leafs prospect made 11 saves in the frame, which was his busiest of the game.

At the other end, Myskiw allowed just the one goal on 24 shots in a losing effort.