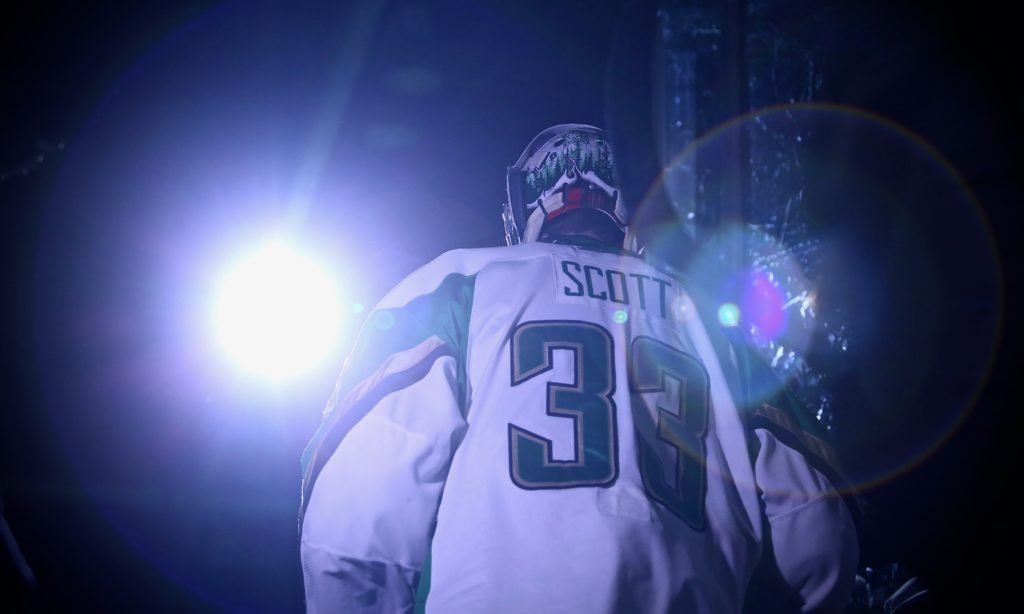 It was Scott’s seventh shutout of the season, surpassing the previous mark set by Rejean Beauchemin (2003-04) and Luke Siemens (2012-13). The Toronto Maple Leafs prospect made 14 saves to set the new mark, which was also the 10th clean sheet of his WHL career.

The Raiders made it an easy night for Scott and gave him plenty of support at the other end of the rink. Parker Kelly and Brett Leason each had a pair of goals. Brayden Pachal picked up a goal and two assists. Cole Fonstad, Noah Gregor, and Spencer Moe each had a goal and an assist. Max Martin and Justin Nachbaur each chipped in a pair of assists.

Like Tuesday night, the Raiders got the scoring started early. Pachal was allowed to skate down the left wing to the net and snapped a shot past Isaac Poulter for his 15th goal at the 3:33 mark of the game.

At the 4:59 mark, Leason doubled the Raiders’ advantage. He buried a cross-zone pass from Aliaksei Protas for his 34th goal of the game, breaking a seven-game goalless drought in the process.

Later in the opening frame, Gregor tallied his 39th goal of the season. With 7:03 to play in the period, the San Jose Sharks prospect circled behind the net and tucked home a wraparound attempt to make it 3-0.

The Raiders opened up a 4-0 lead with 11 seconds remaining in the first. Pachal skated down the left wing again, this time hitting Leason with the backdoor pass for a tap-in goal for his 35th marker of the season.

It was more of the same in the second. Just 2:01 into the frame, Fonstad streaked down the left wing and picked the far corner over Poulter’s glove for his 29th goal of the year.

The Raiders struck twice within 34 seconds late in the middle frame. On a counter attack, Nachbaur found Kelly with a cross-ice pass. The Ottawa Senators prospect collected the pass and uncorked a slapshot that beat Poulter for his 31st goal of the season with 3:50 to play in the second. Then, Moe was stationed in front of the net. Gregor found the Calgary product on the top of the crease and Moe redirected the puck past Poulter for his ninth of the year to put the Raiders up 7-0 after two periods.

Kelly rounded out the scoring at the 8:07 mark of the third period. Trailing the play, Sergei Sapego hit Kelly with a pass and he snapped a shot past Poulter for his 32nd of the season.

Poulter made 40 saves in a losing effort for the Broncos.

Up next for the Raiders is a trip to Swift Current on Sunday afternoon to take on the Broncos for the final time this season. Puck drop is 4 p.m. Catch the game on 900 CKBI or watch at The Rock And Iron Sports Bar.

The next Raiders’ home game is also the final regular season contest at the Art Hauser Centre on Saturday, March 16 against the Saskatoon Blades. Game time is 7 p.m. The Raiders will be wearing Brooks Freeman’s winning jersey design from this season’s Fan Appreciation Night jersey contest. The jerseys will be available via auction, which begins on Monday at Noon CST. Tickets are available at raiderhockey.com and the Raider Office.