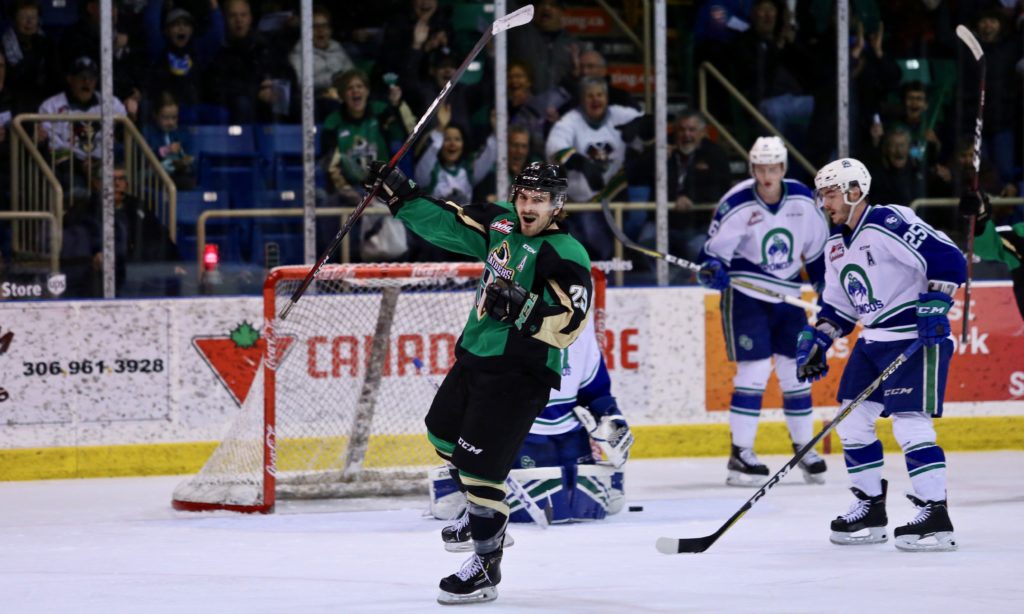 Prince Albert, SK – The Prince Albert Raiders (50-9-2-2) play the penultimate week of the regular season with three games in the next seven days.

Last week, the Raiders finished with a 1-1-1-0 record over their three games. The week began with a 5-4 overtime loss to the Lethbridge Hurricanes. On Friday, the Raiders edged the Red Deer Rebels 2-1 in a shootout. Saturday night saw the Raiders fall 4-2 to the Moose Jaw Warriors at Mosaic Place.

This week, the Raiders have a chance to clinch the Scotty Munro Memorial Trophy as the WHL’s regular season champions. The Raiders can accomplish this feat with a win, or an overtime or shootout loss. Alternatively, a loss by the Vancouver Giants in any situation will clinch the trophy for the Raiders. The last Raiders team to win the Scotty Munro Memorial Trophy was the 1984-85 squad that went on to win the Memorial Cup.

The Raiders open the week with a Tuesday night tilt against the Swift Current Broncos (10-45-4-2) at the Art Hauser Centre. The two teams meet again on Friday night in Prince Albert on Friday night. Both games begin at 7 p.m. Tickets are available at raiderhockey.com and the Raider Office.

The week concludes on Sunday afternoon in Swift Current as the Raiders and Broncos finish their trilogy of games at the Innovation Credit Union i-Plex. Puck drop is 3 p.m. Head to The Rock And Iron Sports Bar to watch the game or listen on 900 CKB with Trevor Redden.