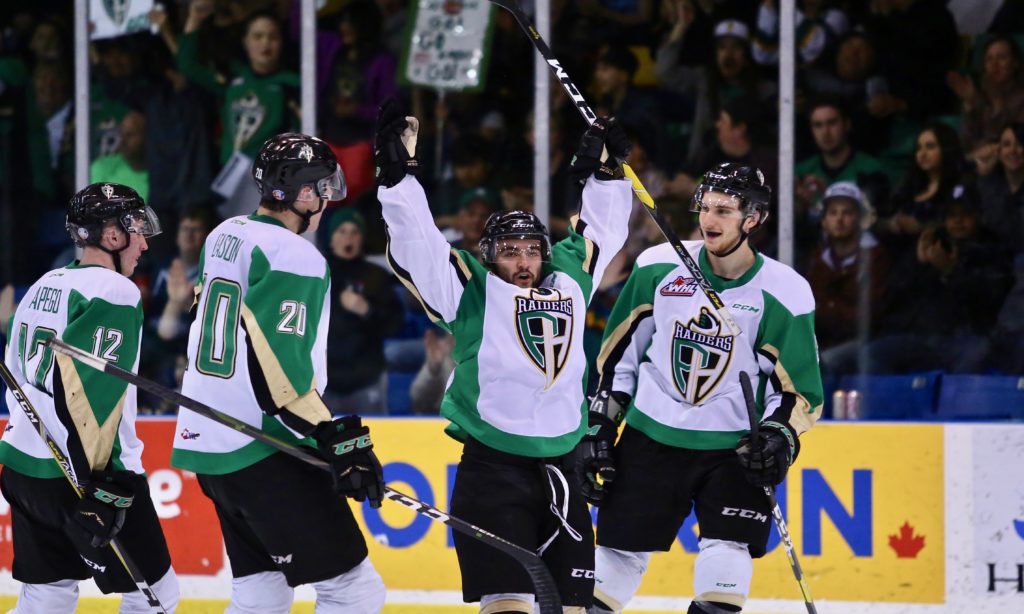 Prince Albert, SK – The Prince Albert Raiders opened the 2019 WHL Playoffs with a 3-0 win in Game 1 of the Round 1 series against the Red Deer Rebels on Friday night at the Art Hauser Centre.

Ian Scott made 21 saves to earn his first career WHL Playoffs shutout and was named the game’s first star.

The Raiders had their chances to score during the first period. The best chance came on a two-on-one with Noah Gregor and Ozzy Wiesblatt. The San Jose Sharks prospect floated a pass to Wiesblatt, but the rookie deflected the puck just wide.

Before the end of the frame, the Raiders opened the scoring. Aliaksei Protas picked up the puck along the half boards in the offensive zone. The import forward sent a pass across the ice to Dante Hannoun who tapped the puck in on the backdoor play with 32 seconds remaining, putting the Raiders up 1-0 after 20 minutes.

Midway through the second, Wiesblatt increased the lead. Brayden Pachal’s point shot was stopped by Ethan Anders. Wiesblatt was in front of the net and on his second attempt batted the puck past Anders to give the Raiders a 2-0 advantage 8:49 into the period.

Later in the third, the Raiders made it a three-goal game. Parker Kelly drove the defence deep into the zone. Justin Nachbaur dug the puck out of the corner and centered for Sean Montgomery. The Raiders overager was left alone in the slot and beat Anders with 3:07 to play in the second.

Scott had his busiest period of the night in the third. His best stop came on a shorthanded breakaway on Brandon Hagel. The Rebels forward got behind the defence but Scott flashed the leather to preserve his shutout.

Anders finished the game with 25 saves in a losing effort.

The Raiders will try to take a 2-0 advantage in the series in Game 2 of the best-of-seven series on Saturday night at the Art Hauser Centre. Puck drop is 7 p.m. Tickets are available at raiderhockey.com and the Raider Office.