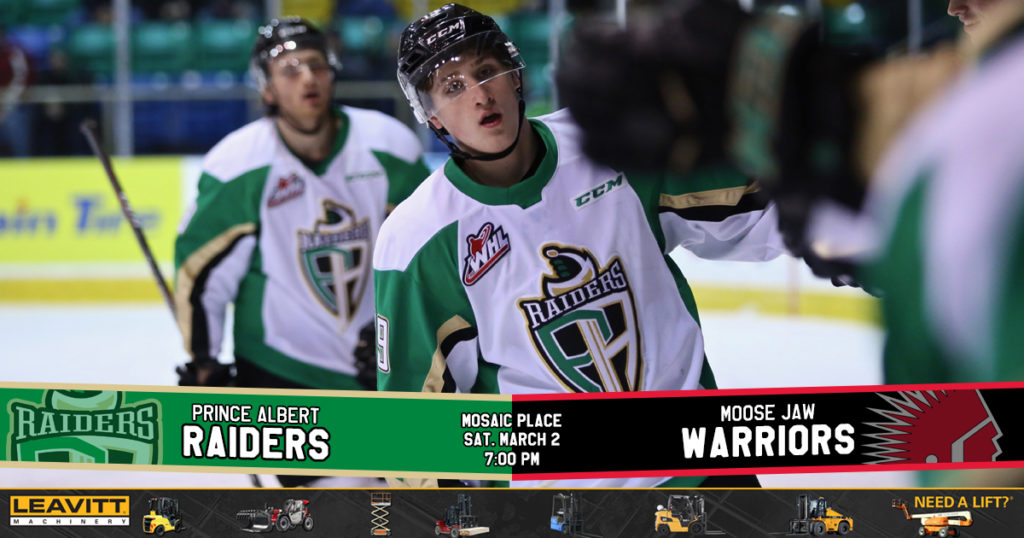 RAIDER REVIEW: The Raiders (50-8-2-2) travel to Moose Jaw tonight to wrap up their season series with the Warriors (34-18-6-2) at Mosaic Place. Last night in Prince Albert, the Raiders downed the Red Deer Rebels 2-1 in a shootout. Noah Gregor scored the Raiders’ goal in regulation. Brandon Hagel answered for the Rebels. Gregor, Dante Hannoun, and Brett Leason solved Ethan Anders in the shootout. Ian Scott earned his 34th win of the year by making 23 stops in regulation and overtime, then turning aside one of two shooters in the shootout.

VS. MOOSE JAW: This is the final game of the season between the Raiders and the Warriors. The Raiders hold a 4-1-0-0 advantage in the season series, including a 4-3 win in the last meeting at the Art Hauser Centre on Feb. 18.

50TH WIN: Friday night was the Raiders’ 50th win of the season, which was the fourth time the team has reached the 50-win plateau since joining the WHL for the 1982-83 season. The Raiders had two 50-win seasons in their last two seasons in the SJHL. With the win, the Raiders have tied the 1991-92 team for the third-most wins since becoming a member of the WHL.

SHOOTOUT SUCCESS: Friday night marked the Raiders’ first shootout win of the season in their third attempt of the year. The win in the shootout snapped a four-game losing streak in the shootout dating back to last season. The Raiders’ last win in a shootout was on March 2, 2018 in Swift Current against the Broncos.

MONTGOMERY TO THE BOX: Sean Montgomery’s penalty during Friday night’s game against the Rebels increased his penalty minutes to six on the season. It was the overager from Calgary’s first penalty since Nov. 14 against Medicine Hat, which was a span of 41 games. Montgomery has totalled just 46 penalty minutes in his 339-game WHL career.

NEXT UP: The Raiders return to the Art Hauser Centre on Tuesday night when the Swift Current Broncos (10-45-3-2) come to town. Puck drop is 7 p.m. Tickets are available at raiderhockey.com and the Raider Office.