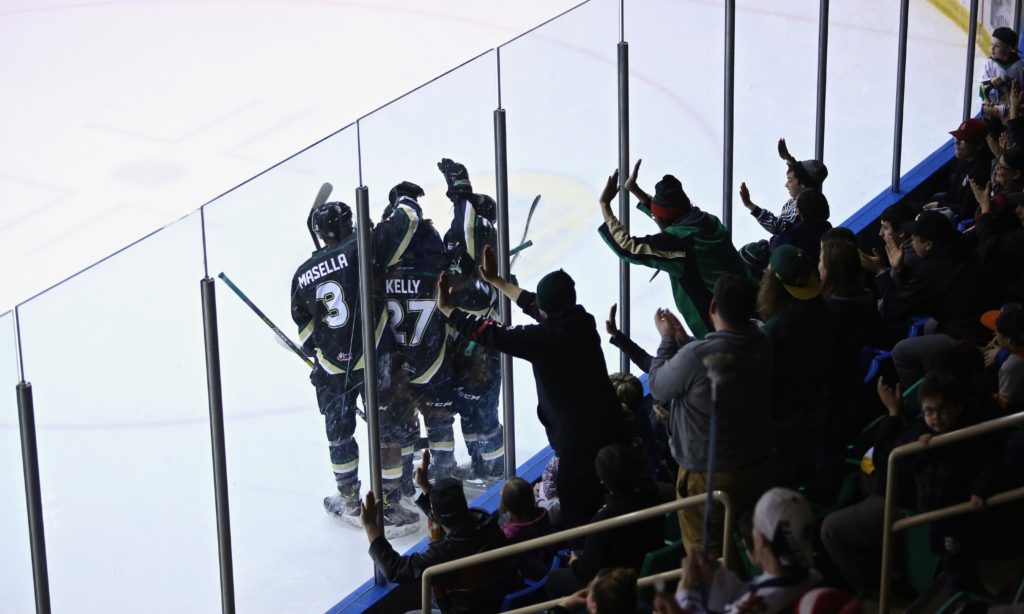 Noah Gregor had a pair of goals in the win to reach 43 on the season and was the only Raider with a multi-point game.

The Raiders opened the scoring 8:05 into the first period. Cole Fonstad forced a turnover in the corner. The Montreal Canadiens prospect got the puck and found Sean Montgomery who snapped a shot past Dorrin Luding for his 29th goal of the season, putting the Raiders up 1-0.

Less than two minutes later, the Raiders made it 2-0 on a power play on Gregor’s first of the game. Ozzy Wiesblatt went faceoff dot to faceoff dot with a one-time pass and the San Jose Sharks prospect beat Luding from one knee for his 42nd goal this year.

The Raiders increased their lead late in the second period. Gregor and Parker Kelly broke into the Blades’ zone on a shorthanded two-on-one. Gregor kept and hit the post. Originally, Kelly followed up the play and banged home the rebound. However, Gregor’s shot actually crossed the line for the San Jose Sharks prospect’s second of the game and 43rd of the year.

In the third, the Raiders had chances to add another goal, but Ludding denied Fonstad from the slot with his blocker.

Saskatoon broke Ian Scott’s shutout bid with 3:56 to play in the third. A loose puck bounced through the slot and to Max Gerlach at the side of the goal. Gerlach collected it and snapped a quick shot past Scott as the net was coming off its moorings. The play was briefly reviewed, but the call on the ice was upheld.

It was as close as the visitors came on the night as they took a roughing penalty with 2:10 to play, keeping them out of the attacking zone for the final minutes of the game.

Scott made 24 saves to earn his 38th win of the year in his 49th appearance. Luding stopped 29 shots in the loss for the Blades.

The Raiders will celebrate the success of the 2018-19 regular season at the Year-End Banquet Presented by Great Western Brewing on Monday night. The banquet begins at 6 p.m.

Then, the Raiders turn their attention to the Red Deer Rebels and Round One of the 2019 WHL Playoffs. The best-of-seven series opens on Friday night at the Art Hauser Centre.

The matchup is set.

Raiders versus Rebels in the first round of the 2019 #WHLPlayoffs.

Single-game tickets are also available for Games 1 and 2 of the 2019 WHL Playoffs, which will be played on March 22 and 23, respectively. Tickets are available at raiderhockey.com and the Raider Office.