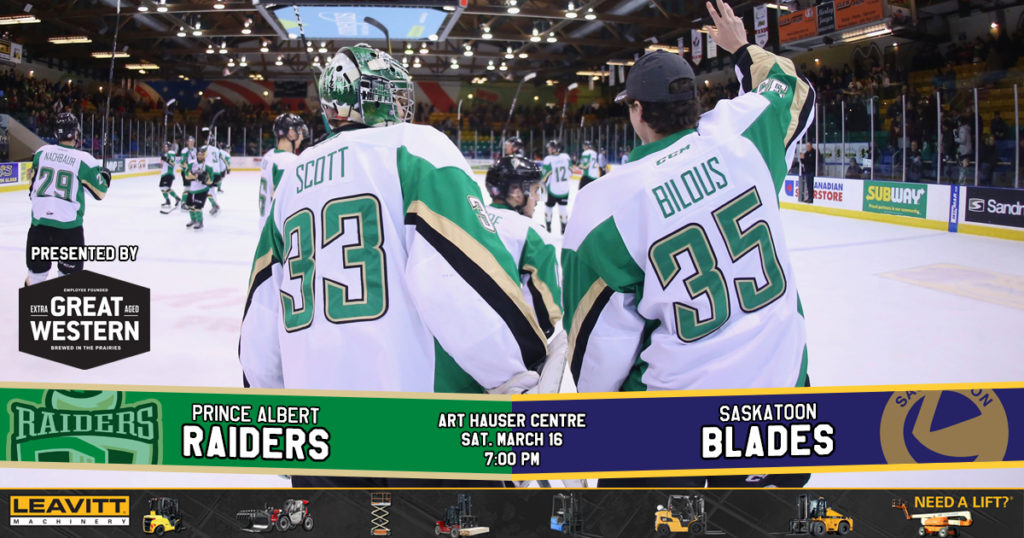 RAIDER REVIEW: The Raiders (53-10-2-2) close out the regular season tonight at the Art Hauser Centre against the Saskatoon Blades (45-14-8-0) in the second leg of the home-and-home series. Last night in Saskatoon, the Raiders dropped a close 3-2 game to the Blades at SaskTel Centre. Parker Kelly led the way with the game’s first goal then assisting on the other. Noah Gregor’s power-play goal in the third period tied the game before the Blades pulled ahead for good. Ian Scott made 29 saves in a losing effort.

VS. SASKATOON: This is the final game of the regular season series between the Raiders and the Blades. So far, the Raiders hold a 5-2-0-0 record against Saskatoon this season, including three wins at the Art Hauser Centre.

PLAYOFF MATCHUP SET: The Raiders learned who they are facing in Round One of the 2019 WHL Playoffs on Friday night. Although they lost to Lethbridge, a Brandon Wheat Kings loss set up a first round series between the Raiders and the Red Deer Rebels. The Raiders won the regular season series 3-1-0-0.

SHUTOUT STREAK: Ian Scott’s impressive shutout streak came to an end in the first period of Friday night’s game against the Blades. The Toronto Maple Leafs prospect’s streak concluded at 185 minutes and 44 seconds, setting a new Raiders record. The previous record was held by Craig Hordal in 1995 at 128:32.

PENALTIES KILLED: The Raiders surrendered their first power-play goal since Feb. 18 against the Moose Jaw Warriors, which was 28 consecutive times shorthanded. The Raiders continue to lead the WHL in this category, killing off 86.6% of penalties this season.

MOE’S MILESTONE: Spencer Moe will play in his 200th WHL game tonight. The forward from Calgary is enjoying the fest offensive season of his WHL career with nine goals and 24 assists in 65 games played this year.

NEXT UP: The Raiders open the 2019 WHL Playoffs at the Art Hauser Centre on Friday, March 22. Puck drop is 7 p.m. Tickets are available at raiderhockey.com and the Raider Office.