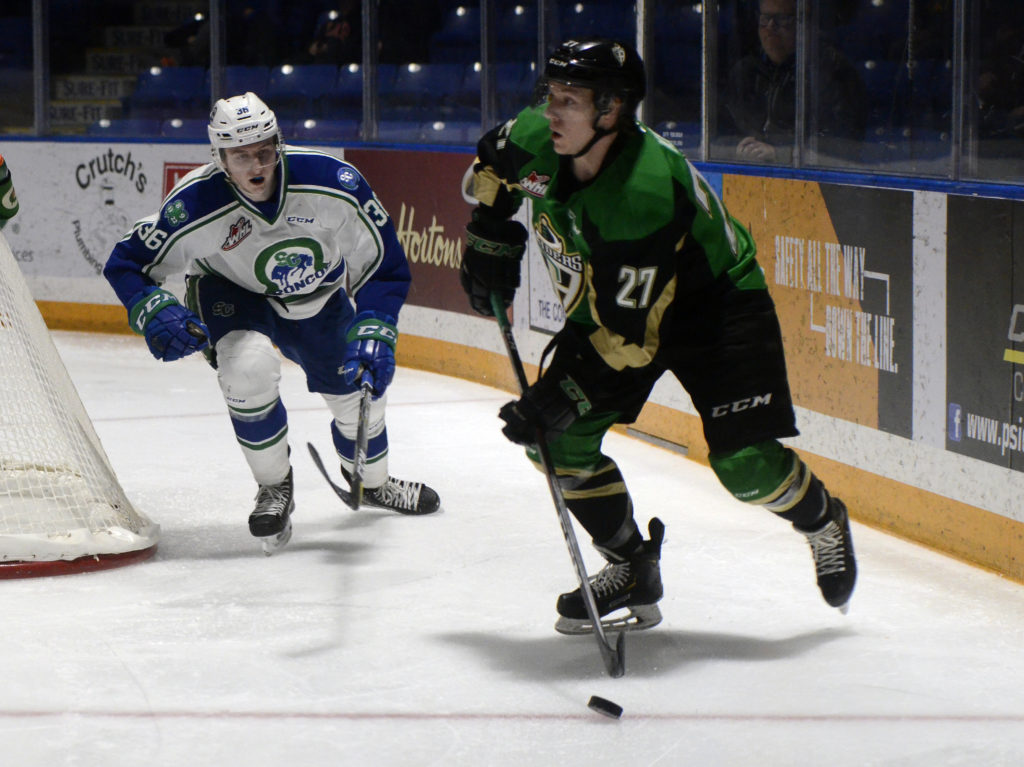 This time, Ian Scott made 14 saves for the Raiders in a 6-0 win over the Broncos. The Toronto Maple Leafs prospect was in goal for all three shutouts, increasing his total on the season to eight. Scott’s 180 consecutive minutes of shutout hockey is a team record.

Offensively, Parker Kelly (two goals and an assist) and Brett Leason (a goal and two assists) each had three points in the win. Sean Montgomery and Sergei Sapego also had multi-point nights with a goal and an assist each.

The win also gave this year’s Raiders the second-most wins in the franchise’s WHL history, trailing just the 1984-85 team. Including the SJHL years, it was the third-most wins since the 1981-82 team had 57 wins in the Raiders’ last season in Junior A.

The Raiders peppered Riley Lamb with shots in the opening period firing 19 shots that hit the target. Eventually, the Raiders broke through with a shorthanded marker. Brayden Pachal sprung Leason with a breakaway pass. The 2019 NHL Draft eligible forward faked a shot then slid the puck through Lamb’s five-hole for his sixth shorthanded goal of the season and 36th overall with 4:49 to play in the first.

SCORES! @Bleason7 finds the back of the net shorthanded! Great pass up the ice from @BraydenPachal!

Swift Current gained some momentum later in the period with 57 seconds of five-on-three time. However, the Raiders were able to kill off both penalties before the period expired and killed off all four infractions.

In the second, the Raiders pulled away. At the 2:10 mark of the period, Noah Gregor struck on the power play with a shot from the right wing. It was Gregor’s 40th goal of the year, reaching that plateau for the first time in his WHL career.

Sapego made it a 3-0 game with 5:05 left in the period. After a scramble in front of the net, the Belarusian blueliner picked up the loose puck and snapped a shot past Lamb for his 10th of the season.

SCORES! Sergei Sapego strikes following a battle in front of the goal!

About a minute later, the Raiders increased their lead to 4-0. Leason sent a puck to the front of the net that Montgomery redirected past Lamb for the overager’s 28th goal of the year with 4:00 to play in the second.

Kelly rounded out the second-period scoring. The Ottawa Senators prospect was sprung on a breakaway by Leason. Kelly went forehand-backhand and lifted the puck over Lamb to put the Raiders up 5-0 with 25 seconds left in the middle frame with his 33rd goal of the year.

SCORES! @Parks_17 pots one with a great finish.

5-0 us right before the end of the second. Gregor, Montgomery, and Sapego also scored in the middle frame.

Kelly added his second of the game with 4:04 remaining. Montgomery found Kelly on a two-on-one rush and the Camrose, AB product snapped a shot past a diving Lamb for his 34th goal of the year, wrapping up the scoring at 6-0.

Kelly nets his second of the game late in the third.

Ian Scott earns his third consecutive shutout and eighth of the season.

Up next for the Raiders is a home-and-home series with the Blades to close out the regular season this weekend.#GoRaidersGo pic.twitter.com/xz8LSE90OH

The Raiders close out the regular season with a home-and-home series against the Saskatoon Blades (44-14-8-0), beginning on Friday night in Saskatoon at SaskTel Centre. Game time is 7 p.m.

On Saturday, the two teams meet again at the Art Hauser Centre in the final game of the regular season. Puck drop is 7 p.m. The Raiders will be wearing Brooks Freeman’s winning jersey design from this season’s Fan Appreciation Night jersey contest. The jerseys will be available via auction, which begins on Monday at Noon MDT. Tickets are available at raiderhockey.com and the Raider Office.

Tickets are also still available for the Raiders Year-End Banquet Presented by Great Western, which will be held on Monday, March 18. The banquet begins at 6 p.m. Tickets are available at the Raider Office for $40.