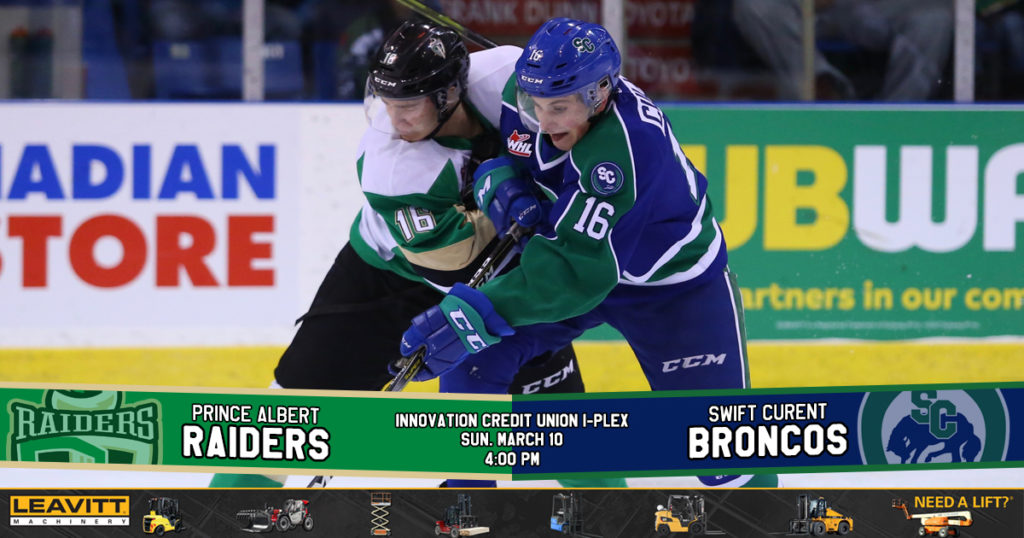 RAIDER REVIEW: The Raiders (52-9-2-2) head to Swift Current this afternoon to wrap up their weeklong series with the Broncos at the Innovation Credit Union i-Plex. On Friday, the Raiders earned their second consecutive shutout against the Broncos with an 8-0 win at the Art Hauser Centre. Parker Kelly and Brett Leason each scored two goals in the win. Brayden Pachal added a goal and two assists. The line of Cole Fonstad, Noah Gregor, and Spencer Moe each had a goal and an assist. Max Martin and Justin Nachbaur each chipped in two assists. Ian Scott picked up his second consecutive shutout with 14 saves.

VS. SWIFT CURRENT: This is the final meeting of the eight-game season series between the Raiders and the Broncos. The Raiders hold a 6-0-0-1 record against the Broncos this season, including a 2-0-0-1 record in Swift Current.

NEW RECORD HOLDER: Ian Scott’s second shutout in as many nights gave him seven on the season, setting the new Raiders single-season shutout record. It was previously shared by Rejean Beauchemin (2003-04) and Luke Siemens (2012-13). It was also the Toronto Maple Leafs prospect’s 10th clean sheet of his WHL career. Beauchemin is the Raiders career shutout record holder with 12 from 2002-05.

NEW CAREER HIGH: With a pair of goals, Parker Kelly set a new career high in points with 61 points this season. He is third Raider to cross the 30-goal mark this season with 32 on the campaign. The Ottawa Senators prospect is starting to heat up again with three goals and an assist in his last three games.

BREAKING THROUGH: Brett Leason snapped a seven-game goalless skid with two markers on Friday night. The drought was the longest of the season for the 2019 NHL Draft prospect. The Calgary product continues to lead the Raiders in scoring with 86 points (35g-51a) in 52 games this season.

NEXT UP: The Raiders begin a regular season-ending home-and-home series with the Saskatoon Blades on Friday night at SaskTel Centre. Game time is 7 p.m. The two teams will meet again on Saturday at the Art Hauser Centre on Fan Appreciation Night. Puck drop is 7 p.m. Tickets are available at raiderhockey.com and the Raider Office.