Raiders Down Rebels for 50th Win of the Season 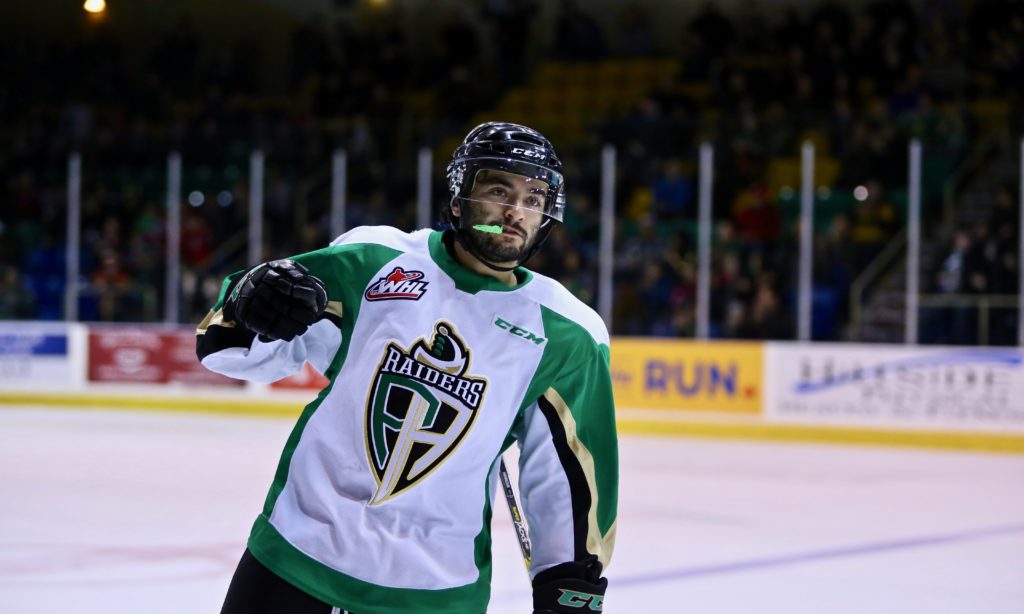 Prince Albert, SK – For the fourth time since joining the WHL, the Prince Albert Raiders reached the 50-win mark with a 2-1 shootout win over the Red Deer Rebels (31-24-4-2) on Friday night at the Art Hauser Centre.

The Raiders (50-8-2-2) also accomplished the mark twice during their years in the SJHL.

Noah Gregor scored in regulation and found the back of the net in the shootout. Dante Hannoun and Brett Leason also solved Ethan Anders in the shootout to clinch the win.

Both teams had chances to open the scoring in the first period. Ozzy Wiesblatt pounced on a puck in the slot but was stopped by Ethan Anders. At the other end, Ian Scott slid across to rob Carson Sass’s one-timer.

In the second, Leason outraced Sass to a loose puck on the right wing. His shot beat Anders but not the post. Later in the period, Scott stepped up to the challenge again when he stopped Reece Johnson twice. He made a pad save with his first attempt, then kicked away the second shot from his side.

The Raiders broke the deadlock midway through the third on the power play. Hannon set up Gregor at the right faceoff circle with a one-timer and the San Jose Sharks prospect’s shot hit a body in front and beat Anders at the 9:29 mark. It was Gregor’s 38th goal of the year.

With 5:39 to play, the Rebels tied it. Brandon Hagel controlled the puck around the Raiders’ zone. He skated into the slot and beat Scott with a shot from the inside hash marks, sending the game to overtime.

In the extra period, the two teams again had their chances. Dawson Barteaux got around the defence but was unable to put his backhand attempt past Scott. At the other end, Hannoun found Wiesblatt streaking to the net. The Calgary product got his stick on it but Anders kicked it away with his left pad.

In the shootout, Gregor got the Raiders on the board when he faked to the backhand and roofed a forehand shot over Anders. After Scott denied Brandon Hagel, Hannoun weaved down the ice and put his shot off the far post and in.

Cam Hausinger kept the Rebels alive when he faked his shot then deked to his backhand to beat Scott.

Leason sealed the win with his shootout attempt. He entered the zone with speed, slowed down, and wired a shot past Anders’ glove to end the game.

Scott finished the game with 23 saves for his 34th win of the season. Anders made 39 saves in a losing effort for the Rebels.

The Raiders are also hosting a watch party in the Ches Leach Lounge for Saturday night’s game against the Warriors for fans of all ages. The evening includes a silent auction, raffle for a Traeger barbecue, and intermission entertainment provided by Kelly Taylor. Admission is $10 at the door.

The next Raiders’ home game is on Tuesday night when the Swift Current Broncos (10-45-3-2) come to town. Puck drop is 7 p.m. Tickets are available at the Raider Office and raiderhockey.com.