Raiders Fall In Overtime To Hurricanes 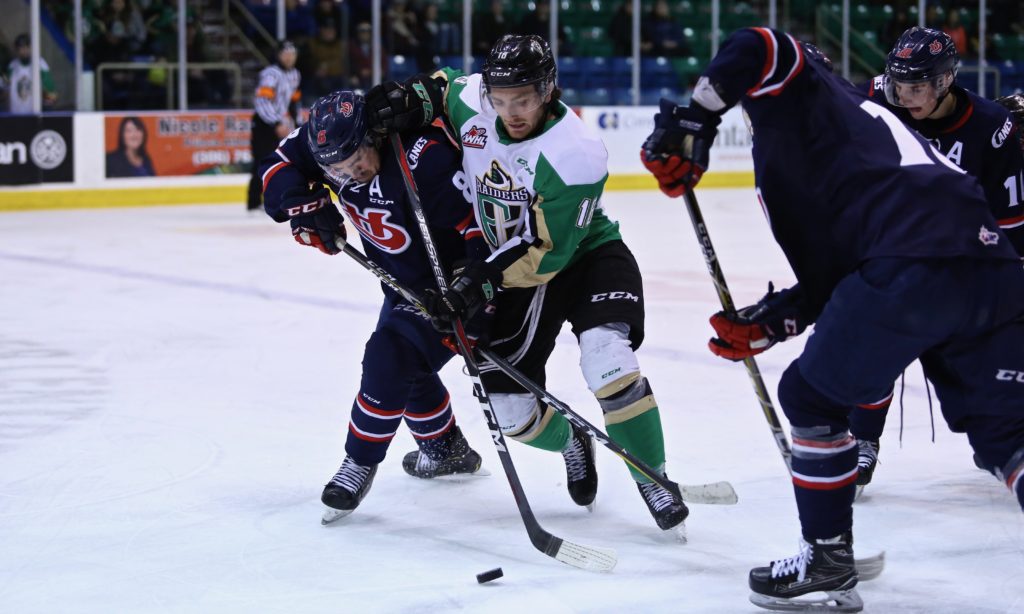 Prince Albert, SK – Jake Elmer’s second goal of the game was the overtime winner as the Prince Albert Raiders (49-8-2-2) fell 5-4 to the Lethbridge Hurricanes (33-18-5-5) on Wednesday night at the Art Hauser Centre.

For the Raiders, Cole Fonstad had a goal and two assists. Kaiden Guhle and Spencer Moe each had a multi-point game with a goal and an assist, while Brett Leason chipped in two helpers.

The Raiders had the chance to open the scoring early in the contest, working the puck around to Noah Gregor on the power play. The San Jose Sharks one-timed the puck on goal, but Carl Tetachuk robbed Gregor of the game’s first goal.

Lethbridge opened the scoring with 8:51 to play in the first. After a scramble in front of the goal, Dylan Cozens pounced on the rebound and buried his 29th goal of the season. Just 13 seconds later, Logan Barlage wired a shot past Ian Scott for his 15th goal to put the Hurricanes up 2-0.

Before the end of the period, the Raiders cut the lead in half. Cole Fonstad’s shot from the wing on the power play was stopped by Tetachuk but it had enough to cross the goal line for the Montreal Canadiens prospects 28th of the year, making it a 2-1 game after 20 minutes.

In the second, the Raiders tied it up with their second power-play goal of the contest. Cole Fonstad found Justin Nachbaur on the wing. Nachbaur’s shot beat Tetachuk and broke the water bottle on the back of the net for his 16th of the season, tying the game at 2-2.

About a minute later, Lethbridge restored its lead. Elmer’s shot was turned aside by Ian Scott. However, Cozens collected the rebound, outwaited the Raiders goaltender, and scored his second of the game to make it 3-2.

Midway through the period, Spencer Moe tied the game again with his eighth of the season. Moe was left alone in front of the goal and got a pass from Loeden Schaufler. The Calgary product had a couple whacks at the puck before putting the backhand past Tetachuk for his eighth of the season to level the score at 3-3 with 8:04 to play in the period.

The Raiders took their first lead of the game at the 9:15 mark of the third period. Fonstad carried the puck into the zone, put the puck between his legs and found the trailing Kaiden Guhle with the pass. Guhle stepped into a shot and beat Teatchuk to put the Raiders up 4-3 with his third goal of the season.

In the final minutes of the game, Lethbridge tied it up. Cozens dug the puck off the half wall and found Elmer. The Calgary product snapped a shot past Scott to extend his goal-scoring streak to 10 games with 2:17 remaining, sending the game to overtime.

In the extra period, the Raiders turned the puck over at the Lethbridge blueline. Elmer grabbed the puck and skated in on a breakaway, snapping a shot past Scott to end the game with his 34th of the season.

Up next for the Raiders is a date with the Red Deer Rebels (31-24-4-1) on Friday night at the Art Hauser Centre. Puck drop is 7 p.m. on Wall of Honour Night. Tickets are available at the Raider Office and at raiderhockey.com.

The Raiders are also hosting a watch party in the Ches Leach Lounge for Saturday night’s game against the Moose Jaw Warriors for fans 19 and older. The evening includes a silent auction, raffle for a Traeger barbecue, and intermission entertainment provided by Kelly Taylor. Admission is $10 at the door.