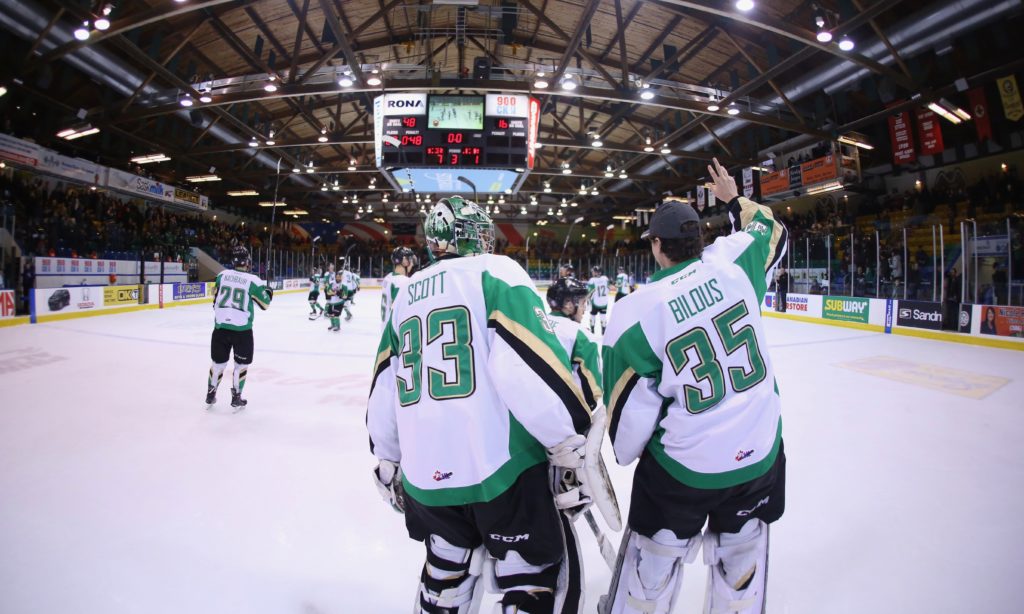 With a 7-1 win over the Brandon Wheat Kings on Saturday night, the Raiders earned their first division title since 1998-99. The Raiders also blanked the Kootenay ICE 4-0 on Friday night.

The Raiders play three games this week, beginning on Wednesday night when the Lethbridge Hurricanes (32-17-5-5) visit the Art Hauser Centre for the final time this season. So far, Prince Albert has won all three meetings of the season series.

On Friday, the Raiders conclude their homestand when the Red Deer Rebels (29-24-4-1) come to town. It’s the final game of the four-game season series, with the Raiders winning two of the three previous contests. The Raiders won the only meeting between the two teams at the Art Hauser Centre this season by a 2-1 score.

The Raiders will also be inducting two more members into the Wall of Honour prior to Friday’s game against the Rebels. The inductees will be announced later this week.

Tickets for the Raiders’ home games are available at the Raider Office and at raiderhockey.com. Puck drop for both games is 7 p.m.

The week concludes on Saturday night with a trip to Moose Jaw for a game against the Warriors (34-16-6-2) at Mosaic Place. The Raiders have won four of the five meetings against Moose Jaw this season, including both games at Mosaic.

The Raiders will be holding a watch party for Saturday night’s game in the Ches Leach Lounge. Tickets are $10 at the door for fans 19 and older. The evening includes a silent auction, a raffle for a Traeger barbecue, and intermission entertainment provided by Kelly Taylor.