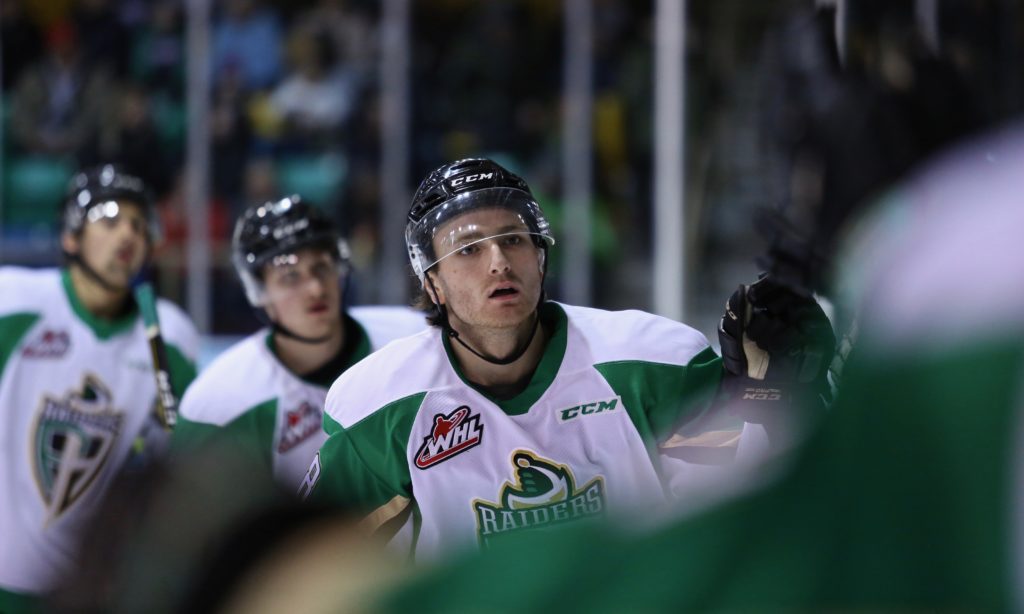 It was Gregor’s fifth game of the year with four points and second this month. It was also the eighth time in his WHL career that he had four points or more.

The San Jose Sharks prospect helped open the scoring 10:14 into the game. Gregor drove the net and hit the side of the goal. Ozzy Wiesblatt followed up the play and banged home his 13th goal of the season to give the Raiders a 1-0 lead.

Five minutes later, Gregor struck for the first time. He dug the puck out of a pile on the side boards, skated to the goal line and beat Adam Evanoff over the shoulder with a perfect shot for his team-leading 34th goal of the season.

The Raiders made it a three-goal game before the end of the first period. Gregor’s shot was stopped by Evanoff, but Sean Montgomery dove for the loose puck and got the rebound past the Warriors goaltender for his 24th of the year.

That goal signaled the end of the night for Evanoff after the first period. He made 17 saves in the first 20 minutes.

In the second period, Gregor scored the eventual game-winning goal. After his two-on-one pass with Wiesblatt didn’t connect, the Raiders kept possession in the zone. Fonstad found Gregor, who skated to the faceoff circle to beat Brodan Salmond five-hole with his 35th of the season.

The Warriors pressed in the closing moments of the second period, but Boston Bilous stood his ground. He denied Brayden Tracey with a point-blank shot, then robbed Justin Almeida before clearing the rebound away from his goal.

Moose Jaw broke through midway through the third period. Daemon Hunt found Tristin Langan with a cross-ice pass and the Warriors’ leading scorer snapped a shot through Bilous to end his shutout bid at the 8:31 mark of the frame.

Late in the period, Brayden Tracey struck twice with two power-play goals with the Warriors’ net empty to make it a 4-3 game but it was too little too late.

Bilous finished the game with 23 saves for his eighth win of the season. Salmond stopped 21 shots in relief for the Warriors.

The Raiders are off until Friday night when they play their first of two weekend home games. On Friday, the Kootenay ICE (11-37-7-1) make their final trip of the season to the Art Hauser Centre. The Brandon Wheat Kings (27-22-3-4) return to Prince Albert on Saturday night to wrap up the season series. Both games begin at 7 p.m. Tickets are available at the Raider Office and raiderhockey.com.