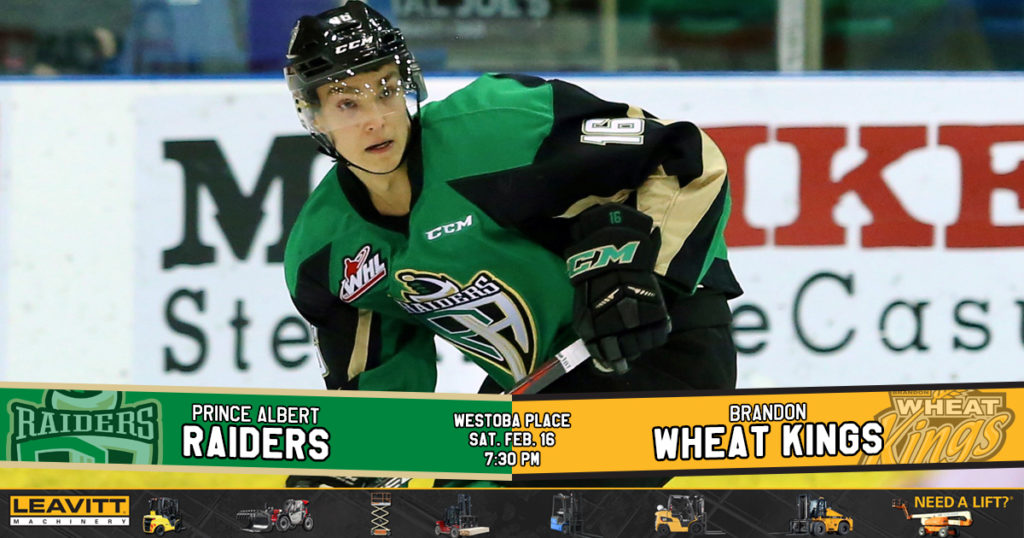 RAIDER REVIEW: The Raiders (46-7-1-2) and the Brandon Wheat Kings (25-22-3-4) complete their home-and-home series tonight at Westoba Place. Last night in Prince Albert, the Raiders fell 5-4 in overtime to the Wheat Kings on Zach Wytinck’s goal at the 3:06 mark of the extra frame. Parker Kelly had a pair of goals and an assist to pace the Raiders’ offensive effort. Aliaksei Protas had a goal and an assist, while Dante Hannoun chipped in a pair of helpers. Sean Montgomery also scored for the Raiders. Boston Bilous stopped 23 shots in his first loss since joining the Raiders.

VS. BRANDON: This is the fifth of six games between the Raiders and the Wheat Kings this season. The Raiders have won both meetings in Brandon this season by a combined 11-2 score.

FOUR OR MORE: Four had been the magic number for the Raiders. Friday night’s loss snapped a 40-game regular season winning streak when the Raiders have scored four or more goals in a game. The last loss came in last year’s regular season finale against the Blades in Saskatoon.

KELLY’S TALLY: Parker Kelly’s two goals on Friday night brought him to 29 on the season, tying a career best set last season. He is also two points off his career high of 59, which was also set last year. Through 55 games, the Ottawa Senators prospect has 28 assists to go along with his 29 goals for 57 points.

SNIPIN’ SEAN MONTGOMERY: Overager Sean Montgomery scored in his return to the lineup on Friday night to run his career-best point streak to six games. The Calgary product has produced three goals and three assists in that span. The Raiders all-time games played leader continues to put up numbers in his final WHL season with 23 goals and 28 assists in 55 games played.

NEXT UP: The Raiders are back at home on Monday afternoon for a Family Day Game against the Moose Jaw Warriors. Puck drop is 4 p.m. Kids and kids at heart can come onto the ice for a post-game skate presented by Real Canadian Superstore. Get tickets at raiderhockey.com and the Raider Office.