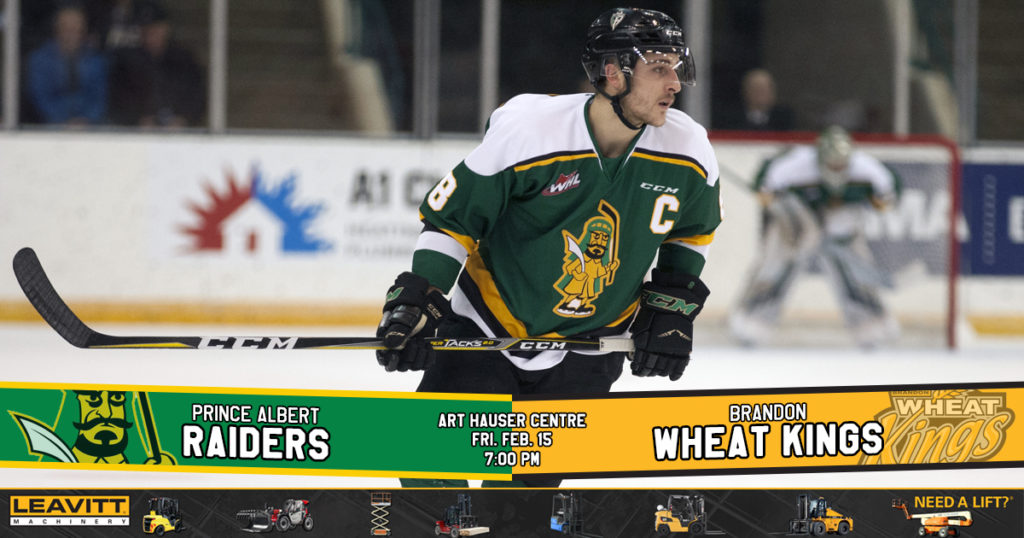 RAIDER REVIEW: The Raiders (46-7-0-2) host the Brandon Wheat Kings (24-22-3-4) at the Art Hauser Centre to open a home-and-home series. On Wednesday night, the Raiders skated to a 3-1 victory over the Swift Current Broncos at the Innovation Credit Union i-Plex. Parker Kelly netted a pair of goals while Dante Hannoun added a goal and two assists. Spencer Moe also chipped in a pair of assists. Boston Bilous turned aside 15 shots to pick up his fourth win as a Raider.

VS. BRANDON: This is the fourth of six games between the Raiders and the Wheat Kings this season. The Raiders have won all three meetings so far, including a 5-2 victory in Prince Albert on Dec. 8.

SNAPPED: Noah Gregor had his six-game point streak snapped on Wednesday night in Swift Current, tying his longest streak of the season. Over those games, the overager from Beaumont, AB scored six goals and added seven assists. The San Jose Sharks prospect is now tied for the team lead with 33 goals and has 40 assists in 50 games played.

FIVE-NINE LINE: The line of Dante Hannoun, Parker Kelly, and Spencer Moe – or the Five-Nine Line as coined by paNOW’s Jeff D’Andrea – was the driving force behind Wednesday night’s win in Swift Current. The line factored in on every goal and combined for seven points on the evening. Hannoun extended his current point streak to five games, which is one back of his longest point streak this year. The Delta, BC product has seven goals and 13 assists in 17 games since joining the Raiders. In total, Hannoun has 26 goals and 30 assists in 45 games.

CANADA WINTER GAMES: Four Prince Albert Raiders prospects will be taking the ice at the Canada Winter Games. Defenceman Nolan Allan and forward Logan Linklater will suit up for Saskatchewan; Forward Tyson Laventure will play for Team Alberta; and defenceman Tayem Gislason will play for Team Manitoba. The hockey event begins today and runs until February 22.

NEXT UP: The Raiders head to Brandon on Saturday night to wrap up the home-and-home series with the Wheat Kings. Game time at Westoba Place is 7:30 p.m. The next Raiders’ home game is on Monday afternoon for a Family Day Game against the Moose Jaw Warriors. Puck drop is 4 p.m. Kids and kids at heart can come onto the ice for a post-game skate presented by Real Canadian Superstore. Get tickets at raiderhockey.com and the Raider Office.