Fonstad Named WHL On The Run Player of the Week 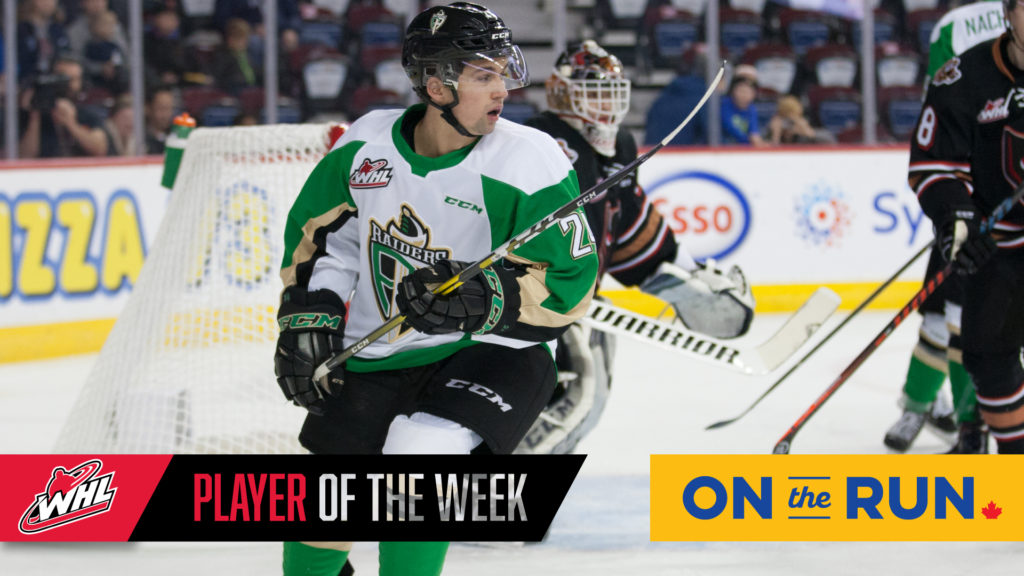 Calgary, Alta. – The Western Hockey League announced today that Montréal Canadiens prospect and Prince Albert Raiders forward Cole Fonstad has been named the WHL On the Run Player of the Week for the week ending February 10, 2019.

Fonstad recorded eight points (5G-3A) and a plus-six rating in three games this week as the Raiders went a perfect 3-0-0-0 to wrap up a Central Division swing, becoming the first team to secure a 2019 WHL Playoff berth with 88 points last Tuesday. The Raiders now hold a 45-7-0-2 record for 92 points.

Monday against Edmonton, Fonstad scored the Raiders’ fifth goal at even strength, which supported a 5-1 win in Prince Albert’s favour. On Friday night in Calgary, Fonstad aided the Raiders in an 8-2 victory over the Hitmen with two goals and three assists. Scoring two even-strength goals, assisting on two even-strength goals and one power-play goal, Fonstad was awarded the first star of the game as well as the third star of the night in the WHL. Fonstad’s career-high five-point night allowed him to surpass the 100-assist mark in his WHL career.

Fonstad’s success continued on Saturday night in Lethbridge where he scored twice and marked his 20th multi-point game of the 2018-19 WHL Regular Season. In a tight 6-5 win over the Hurricanes, Fonstad scored Prince Albert’s third and sixth goals of the game, both at even strength to earn the third star of the game.

Returning to action Wednesday, February 13 (7:00 p.m. CT), Fonstad and the Raiders will take on the Swift Current Broncos at Innovation Credit Union i-plex.

The Raiders return to the Art Hauser Centre on Friday night to take on the Brandon Wheat Kings. Puck drop is 7 p.m. Tickets are available at raiderhockey.com and the Raider Office.