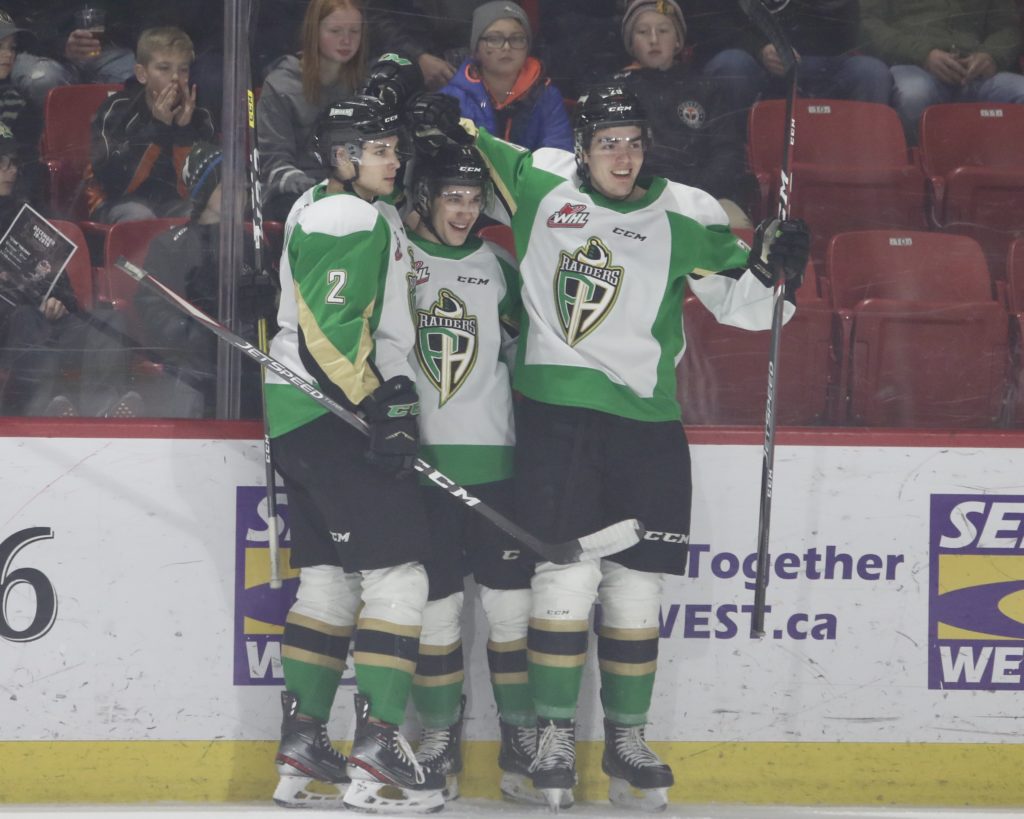 The goals were Horon’s first two as a Raider since being acquired from the Seattle Thunderbirds midway through November. Evan Herman and Tyson Laventure each had a goal and an assist. Daniil Stepanov also found the back of the net for the Raiders.

Horon got the scoring started 3:16 into the contest. Cole Nagy sent a backhand pass across the zone to a cutting Horon. The Lethbridge product tipped the pass past a sliding Adam Evanoff for his second of the season.

SCORES! Michael Horon gets his first as a Raider!

Midway through the opening period, the Raiders doubled their lead. Herman cut through the Warriors defence and hit Horon with a pass. Horon looked to return the pass to Herman at the top of the crease, but the pass went off a Warriors defenceman in front of the goal and past Evanoff for Horon’s second of the contest.

SCORES! Michael Horon gets his second of the game as his centering pass goes off a Warriors stick and past Evanoff!

Just before the end of the opening period, the Warriors got on the board. Brayden Tracey found Owen Hardy at the side of the goal. The Warriors captain controlled the puck and slid it through Carter Serhyenko’s five-hole to make it a 2-1 game with 37 seconds to play in the first period.

At the 5:35 mark of the second, the Raiders restored their two-goal lead. Jakob Brook carried the puck into the Warriors’ end on a shorthanded rush. He found a trailing Herman and the rookie fired a quick shot past Evanoff for his sixth of the year and first shorthanded marker of his WHL career.

Laventure extended the Raiders’ lead less than two minutes later. Ozzy Wiesblatt hit Laventure with a pass in the middle of the zone. The Lloydminster, AB product put a shot on goal that was turned aside by Evanoff. Laventure found the rebound and buried it from a very sharp angle for his fourth of the season.

SCORES! @tysonlaventure nets his own rebound from a sharp angle!

The Raiders added another late in the third period to wrap up the scoring. Reece Vitelli spotted Stepanov cutting to the net after he beat his man. The Belarusian lifted his shot over a sprawling Evanoff for his fourth of the season, making it a 5-1 contest with 6:53 to play. It was also Stepanov’s third point in the third game against this former club.

Serhyenko picked up the win between the pipes for the Raiders with a 28-save performance. It lowered his goals-against average to 1.56 as he allowed only one goal in a game for the third time this year.

Evanoff made 22 saves in the loss for the Warriors.

The Raiders are back at the Art Hauser Centre on Wednesday night to take on the Medicine Hat Tigers. Wednesday’s game is the Wawanesa Toy Drive in support of the Optimist Club of Prince Albert. Fans can bring a new and unwrapped toy for donation to the Optimist Club’s Santa Anonymous. Get more details at wawanesa.com/toydrive.

The home schedule prior to the holiday break wraps up on Saturday night for the Teddy Bear Toss Presented By Canadian Tire against the Kamloops Blazers.

All three games begin at 7 p.m. Tickets are available at the Raiders Office and online here.