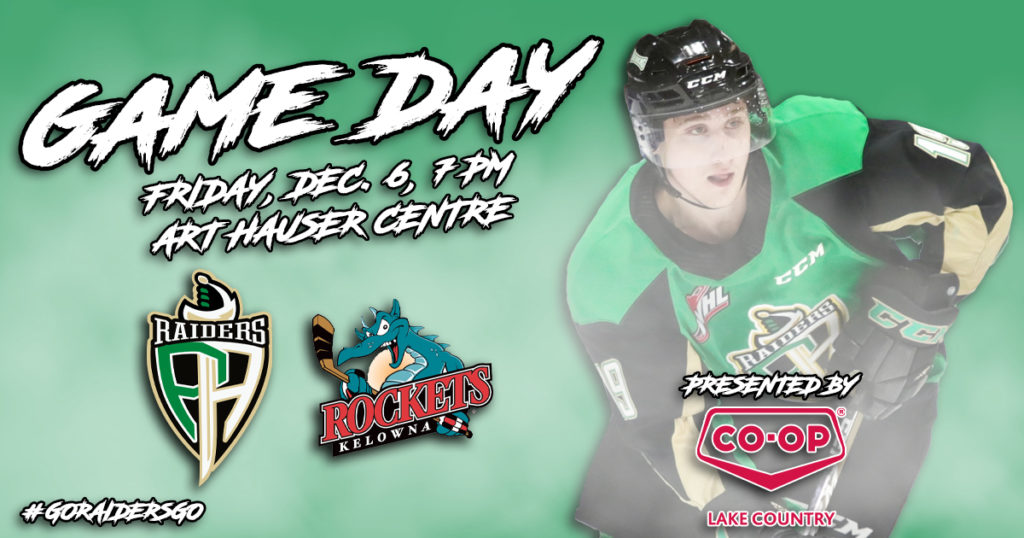 RAIDER REVIEW: The Raiders (18-5-3-1) welcome the Kelowna Rockets (14-8-1-2) to the Art Hauser Centre tonight. In their last action, the Raiders knocked off the Broncos 4-1 in Swift Current. Ozzy Wiesblatt had a pair of goals for the Raiders, while Aliaksei Protas and Ilya Usau picked up a pair of assists each. Carter Serhyenko got the win with an 18-save effort.

VS. KELOWNA: Last season, the Raiders fell 4-3 in a shootout to the Rockets in Kelowna at Prospera Place. Aliaksei Protas, Dante Hannoun, and Parker Kelly scored the Raiders’ goals in the game. Spencer Moe had a pair of assists.

NOVEMBER RECAP: The Raiders finished November with a 9-3-0-1 record to hold on to the top spot in the East Division. Aliaksei Protas led the Raiders in scoring with nine goals and 14 assists in 23 games to continue to lead the team in all offensive categories.

MOE-VEMBER:  Spencer Moe finished second in team scoring and fourth in WHL scoring for November. The Calgary, AB product posted nine goals and 11 assists in 13 games.  Moe was held off the scoresheet just once in the month. So far this year, he has a career high 11 goals and 18 assists.

HERMAN’S MONTH: Evan Herman picked up 10 points (four goals, six assists) in 13 games during November, which was fourth among all rookies in the WHL. All but two of Herman’s points came in the last month. Hailing from The Pas, MB, he has five goals and seven assists in 24 games so far this year.

RISING IN THE RANKS: The Raiders jumped to fourth in the Kia CHL Top 10 which was released on Wednesday evening. The team rose two spots from its previous ranking. The Raiders are the highest ranked WHL team this week.

NEXT UP: The Raiders head to Moose Jaw tomorrow night to faceoff with the Warriors. Game time is 7 p.m. The next Raiders’ home game is on Wednesday night against the Medicine Hat Tigers for the Wawanesa Toy Drive in support of the Optimist Club of Prince Albert. Puck drop is 7 p.m. Tickets are available at the Raiders Office and online here.