Raiders Fall to Blades in Saskatoon 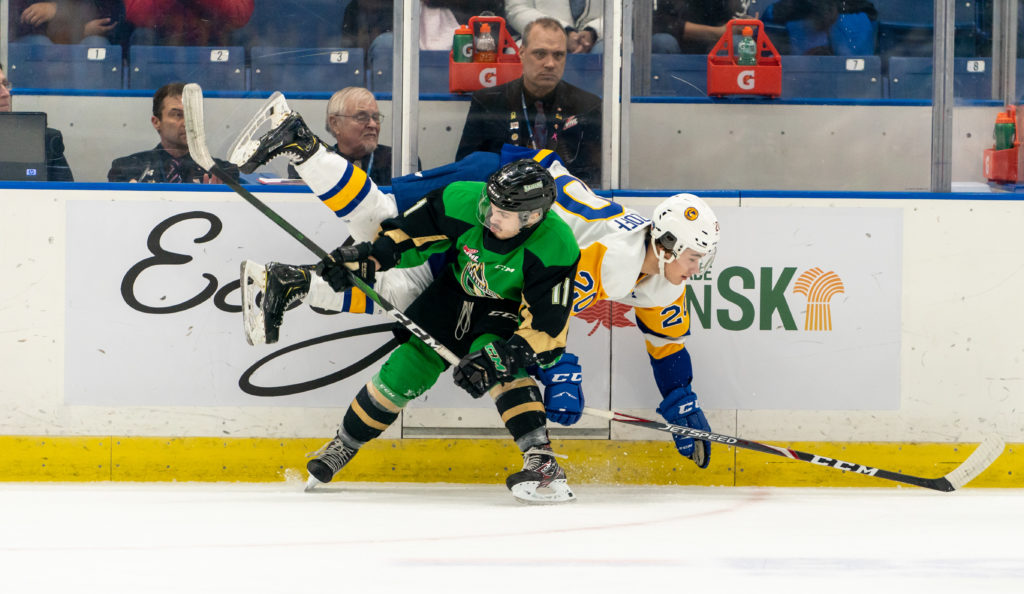 Ilya Usau and Aliaksei Protas factored into all three Raiders goals on the night. Usau had two goals and an assist in the loss, while Protas added a goal and two assists.

Saskatoon opened the scoring 1:50 into the game. Matthew Sanders let a shot go from the point that got through traffic and past Carter Serhyenko to make it a 1-0 game.

At the 2:41 mark, Jakob Brook was given a five-minute major and a game misconduct for checking Nolan Kneen from behind in the corner. On the ensuing power play, the Blades were able to extend their lead with two goals. Chase Wouters made it 2-0 when he finished off a tic-tac-toe passing play past a sprawling Serhyenko. Just more than a minute later, Scott Walford beat Serhyenko through traffic from the point to give the Blades a 3-0 advantage.

The Raiders pushed back through the rest of the period. Their best chance of the frame came when Usau cut through the zone and snapped a shot from the slot that beat Nolan Maier on the blocker side, but hit the crossbar and ricocheted into the corner.

In the second, the Blades capitalized quickly to make it a 4-0 game. Walford stepped in from the blueline and snapped a shot past Boston Bilous from the top of the left faceoff circle for his second of the night 35 seconds into the middle frame.

Saskatoon extended its lead to 5-0 at the 4:32 mark of the second. Eric Florchuk cut towards the net from the corner and his attempt was stopped by Bilous. Colton Dach was left alone in front of the goal and the rookie put in the rebound.

After being denied by the post in the first period, Usau got the Raiders on the board midway through the second. Protas skated around the back of the net and came out on the right side. He fired a pass across the crease to Usau who buried it into the empty side of the cage for his eighth of the season.

SCORES! Ilya Usau gets us on the board just before the media timeout.

Usau tallied his second of the game and ninth of the year with 2:23 to play. Protas fought off Wouters along the boards and hit Usau with a pass. Usau skated to the top of the slot and wired a shot past Maier to make it 5-2.

SCORES! Ilya Usau nets his second of the night!

Just before the end of the period, Protas brought the Raiders back within two. He circled the offensive zone and drove down the left wing and picked the corner on Maier over his glove hand for the Washington Capitals prospect’s 20th of the year.

SCORES! The Viper strikes! @protas_21 circles the zone and snaps a shot past Maier!

The Raiders continued their pressure in the third period, outshooting the Blades 17-5 in the final frame. One of the shots that didn’t count on the clock was when Spencer Moe skated across the zone and fired a shot on goal from the right wing that found iron on the far side of the net midway through the period.

With about five minutes to play, Matthew Culling made a cross-ice pass to Daniil Stepanov, who found a cutting Reece Vitelli. The Winnipeg product got his stick on the puck to get it on goal, but Maier turned aside the attempt.

Bilous made 14 saves in relief for the Raiders. Maier stopped 35 shots for the Blades.

The Raiders return to the Art Hauser Centre on Monday night when the Winnipeg ICE come to town for the final game of the decade. Puck drop is 7 p.m. Tickets are available at the Raiders Office and online here.