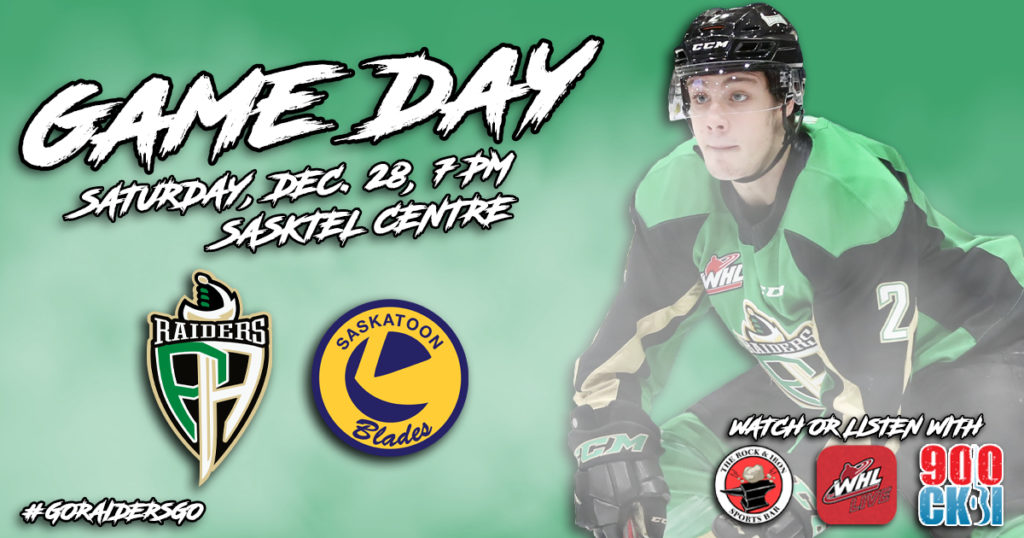 RAIDER REVIEW: The Raiders (20-10-3-1) close out their home-and-home series with the Saskatoon Blades (16-15-1-2) tonight at SaskTel Centre. Last night, the Raiders dropped a 3-2 game to the Blades at the Art Hauser Centre. Aliaksei Protas had a goal and an assist in the loss for the Raiders. Spencer Moe also scored. Boston Bilous turned aside 12 shots in the loss.

WELCOME BACK: Both Aliaksei Protas and Ilya Usau found their way onto the scoresheet in their first game back from the 2020 World Under-20 Championship Division 1 tournament. Protas had a goal and an assist to increase his team-leading total to 44 points and extend his point streak to 10 games. Usau added an assist on the Raiders’ opening goal to put him in a tie for fifth among rookies in the WHL with 22 points.

NEW CAREER BEST: With his goal on Friday night, Spencer Moe has set a new career high for points in a season with 34 (15 goals, 19 assists). His previous high was 33 points (nine goals, 24 assists) set last year.  The Calgary product is the fourth Raider this season to reach the 15-goal plateau. Moe also scored the first goal of the game for the third time this season, which is tied for the team lead with Aliaksei Protas and Kaiden Guhle.

IN THE BOX: Also, Moe found himself in an unfamiliar column in the scoresheet when took his first penalty of the season on Friday night against the Blades. However, there is still one Raider that hasn’t taken a penalty this season—Aliaksei Protas.

ROSTER NEWS: The Raiders acquired 2001-born centre Matthew Culling from the Swift Current Broncos on Friday morning in exchange for 2001-born forward Cole Nagy. Culling, who hails from Regina, SK, made his Raiders debut on Friday night. In 32 games this season, Culling has four points.

NEXT UP: The Raiders return to the Art Hauser Centre on Monday night for their final game in 2019 when they host the Winnipeg ICE (20-13-1-0). Puck drop is 7 p.m. Tickets are available online here.