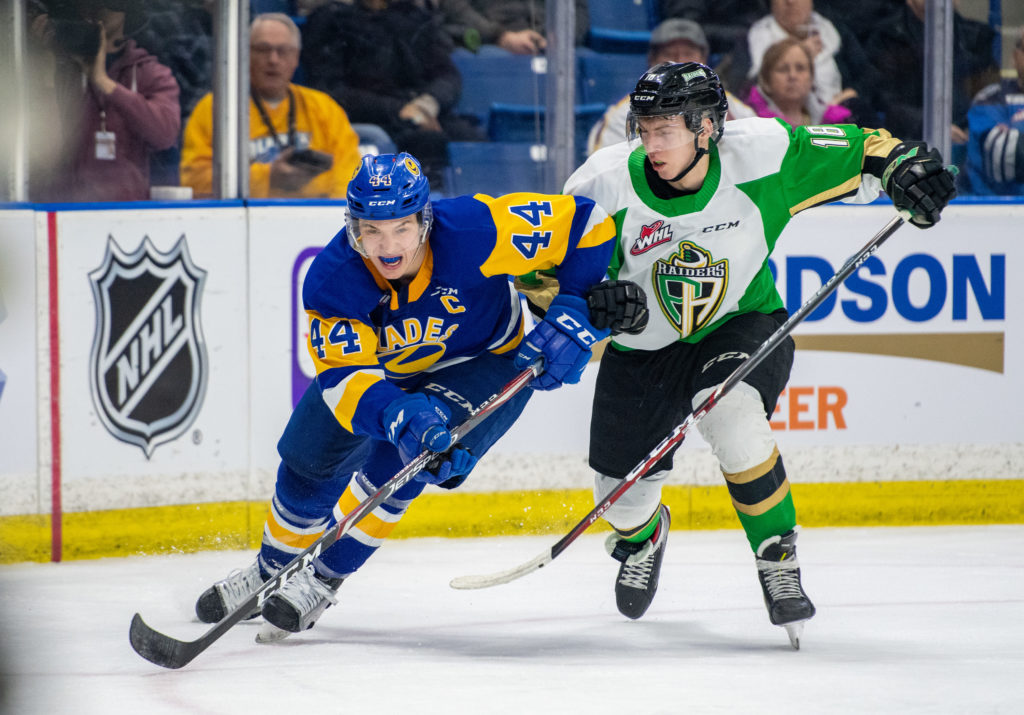 Ozzy Wiesblatt scored the Raiders’ lone goal of the evening in the third period.

Despite the loss, the Raiders head into the break in top spot of the East Division with 44 points.

The Blades opened the scoring midway through the first period, shortly after the Raiders killed off a penalty. From the left corner, Scott Walford found Tristen Robins at the right faceoff circle with a pass. The Blades forward was able to put the puck past a sprawling Boston Bilous to make it a 1-0 game with 9:16 to go in the opening period.

In the second, the Raiders had two quality chances to tie the game. First, Eric Pearce was sent in on a breakaway. He made a move to his backhand, but was stopped by Nolan Maier. Shortly after, Justin Nachbaur was set up the slot, however he sent his shot just high of the goal.

Late in the period, Evan Herman was able streak down the left wing. His shot beat Nolan Maier but not the crossbar.

After the puck got back into the Raiders’ end following Herman’s chance, the Raiders couldn’t exit the zone. Chase Wouters picked off a pass, skated in, and snapped his shot past Bilous with 2:03 remaining in the middle frame.

The Raiders got on the board 2:06 into the third period. Kaiden Guhle stopped a Blades’ clearing attempt. He collected the puck and found Wiesblatt in the slot. Wiesblatt put a shot on goal that went off Maier for his 15th of the year, making it a 2-1 game.

SCORES! @ozzywiesblatt gets his shot past Nolan Maier!

Less than a minute later, the Blades restored their two-goal lead. Saskatoon won a faceoff in the Raiders’ end to Zach Huber. The forward got control of the puck and beat Bilous with a quick shot to give the Blades a 3-1 advantage.

With 7:27 to play, Saskatoon made it a 4-1 game on the power play. Robins’ shot from the point hit bodies in front of the goal. Eric Florchuk found the loose puck and banged home the rebound to wrap up the scoring.

The Raiders kept fighting to the end. Guhle was able to step into a shot, but he found the crossbar.

Bilous finished the game with 24 saves in the loss for the Raiders. Maier stopped 24 shots for the Blades.

The Raiders are back in action on Friday, December 27 when they open a home-and-home series with the Blades at the Art Hauser Centre. Puck drop is 7 p.m. Tickets are available at the Raiders Office and online here.