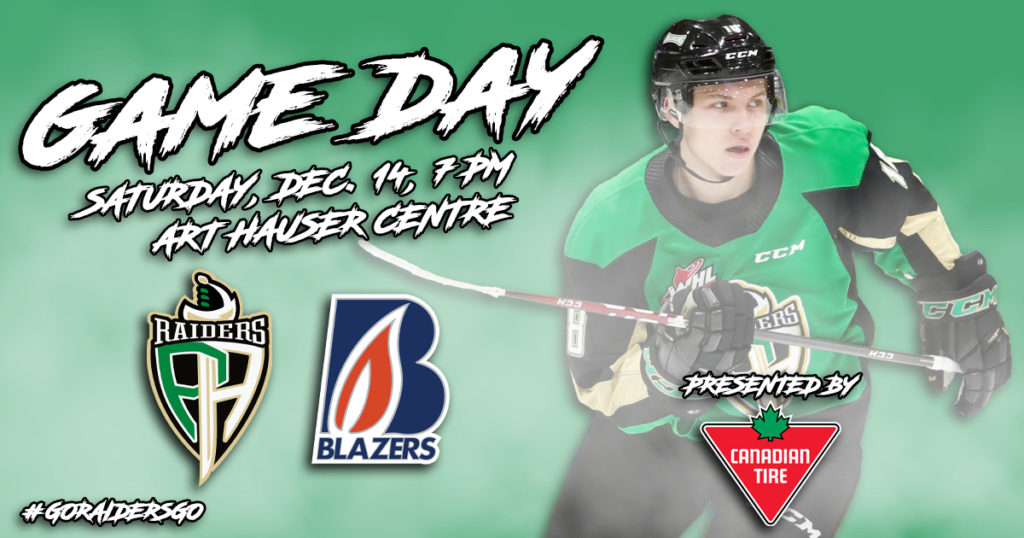 RAIDER REVIEW: The Raiders (20-7-3-1) host the Kamloops Blazers (20-9-2-1) on the annual Teddy Bear Toss Presented By Canadian Tire. Last night against Winnipeg, the Raiders downed the ICE 3-1 at the Art Hauser Centre. Ozzy Wiesblatt had a goal and an assist in the win. Spencer Moe and Justin Nachbaur also scored. Carter Serhyenko picked up his fifth win of the year with a 24-save performance.

VS. KAMLOOPS: The Raiders have won back-to-back games against the Blazers. Last year, the Raiders downed the Blazers 4-1 in Kamloops. During the 2017-18 season, the Raiders knocked off the Blazers 6-5 in a shootout at the Art Hauser Centre.

HELPING OUT: With an assist on Spencer Moe’s goal on Friday night, Ozzy Wiesblatt moved into a share of the team lead in assists with 24 on the season. He also scored in the game, giving the 2020 NHL Draft prospect his ninth multi-point game of the season.

SCORING TOUCH: Justin Nachbaur snapped a seven-game goalless drought on Friday night with his first-period marker against Winnipeg. The goal held up as the game winner, giving the Cross Lake, MB product his second game-winning goal of the season. Nachbaur has four goals and nine assists in 31 games this season.

SPECIAL TEAMS: Spencer Moe’s third-period goal extended the Raiders streak of games with a power-play marker to five. The Raiders have the seventh-ranked power play in the WHL this season, converting on 22.3% of their opportunities.

NEXT UP: The Raiders close out their schedule before the holiday break tomorrow in Saskatoon against the Blades at SaskTel Centre. Puck drop is 4 p.m. The next Raiders’ home game is on Friday, December 27 against the Blades. Game time is 7 p.m. Tickets are available at the Raiders Office and online here.