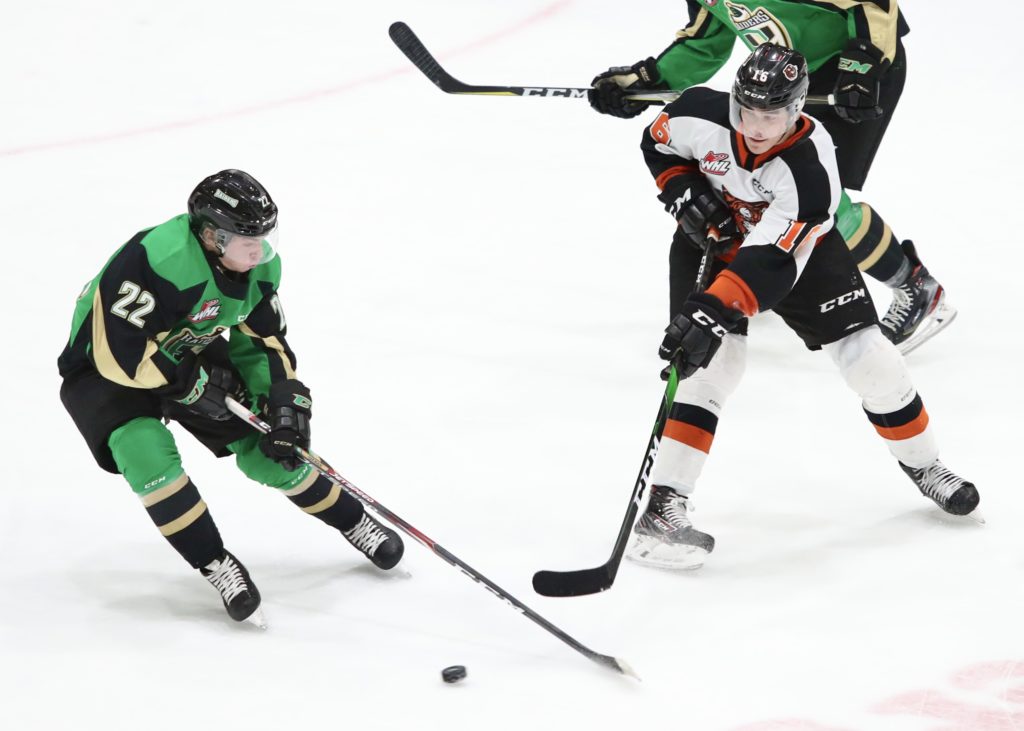 Spencer Moe had two goals for the Raiders in the loss. Ozzy Wiesblatt chipped in three assists. Brett Kemp and Ryan Chyzowski each recorded a hat trick for the Tigers. Cole Sillinger had a goal and four assists.

The Raiders and Tigers traded chances through the first period. Medicine Hat eventually struck first late in the opening frame. Sillinger picked up the puck after a turnover at the Raiders blueline and skated in on Boston Bilous. The Raiders goalie stopped the shot, but Kemp followed up and buried the rebound to give the Tigers the lead with 1:50 to go.

Just 34 seconds later, Sillinger sprung Kemp with a stretch pass. Kemp was able to fend off a Raiders defender, drag the puck around Bilous, and tuck home his second of the night to give the Tigers a 2-0 advantage after 20 minutes.

The Tigers increased their lead to 3-0 a minute into the second period. Sillinger recovered a puck behind the Raiders’ net. He threw a pass to Ryan Chyzowski who beat Bilous with a one-timer.

The Raiders got on the board four minutes later. Wiesblatt hit Watts with a stretch pass on the left wing. Watts protected the puck from the defenceman and wired a shot past Tigers goaltender Garin Bjorklund for his 15th of the season to bring the Raiders within two.

At the 7:52 mark of the second, Kaiden Guhle made it a one-goal game. Wiesblatt threw the puck across the zone for his fellow 2020 NHL Draft prospect. Guhle fired a shot from the right faceoff circle over Bjorklund’s glove for his seventh goal of the year.

Midway through the second, the Tigers restored their two-goal lead. Cole Clayton took a pass at the top of the zone, skated into a shot, and beat Bilous to make it 4-2 with 9:01 to play in the second.

The Raiders almost got back within one with a shorthanded chance. Watts picked up a turnover at the Medicine Hat blueline. He set up Wiesblatt with a give-and-go, but Watts hit the crossbar after getting the return feed.

In the dying seconds of the middle frame, Moe made it a 4-3 game. Watts made a backhand saucer pass to a streaking Moe. The Calgary product got behind the defence and slid the puck through Bjorklund’s five-hole for his 12th goal of the year.

Just 34 seconds into the third, Moe struck again to tie the game. He skated in on the left wing and snapped a shot that got through Bjorklund under the goaltender’s arm for his second goal of the night, making it a 4-4 game.

The Tigers got the lead back on a power play shortly after. Kemp completed the hat trick when he took a feed from Elijah Brown and beat Bilous with a shot from the top of the slot, giving Medicine Hat a 5-4 lead at the 2:12 mark of the middle frame.

Chyzowski added to the Tigers’ lead at the 6:51 mark with another power-play goal. The Tigers forward took a pass from Sillinger at the hashmarks and snapped a shot past Bilous to make it a 6-4 game. That goal ended Bilous’ night. The Raiders goaltender made 24 saves in just shy of 47 minutes of play.

With 7:01 to play, Chyzowski wrapped up a hat trick of his own on the power play. Kemp set up Chyzowski with a one-timer at the top of the slot and the Kamloops product beat Carter Serhyenko to put Medicine Hat up 7-4.

Late in the third, the Tigers scored again. Sillinger snapped a shot past Serhyenko with six seconds left on the clock to wrap up the scoring at 8-4.

In his relief appearance, Serhyenko stopped six of eight shots fired his way. Bjorklund made 31 saves for the Tigers in the win.

Up next for the Raiders is a game against the Winnipeg ICE at the Art Hauser Centre on Friday on Ugly Christmas Sweater Night Presented By Lakeland Ford. The Raiders will be wearing limited edition jerseys inspired by ugly Christmas sweaters. The online auction closes on Thursday at 5 p.m. The highest bids from the unsold jerseys will carry on to the silent auction on Friday night. Get all of the details at 32auctions.com/UglyChristmasSweaters.

The home schedule prior to the holiday break wraps up on Saturday night for the Teddy Bear Toss Presented By Canadian Tire against the Kamloops Blazers.